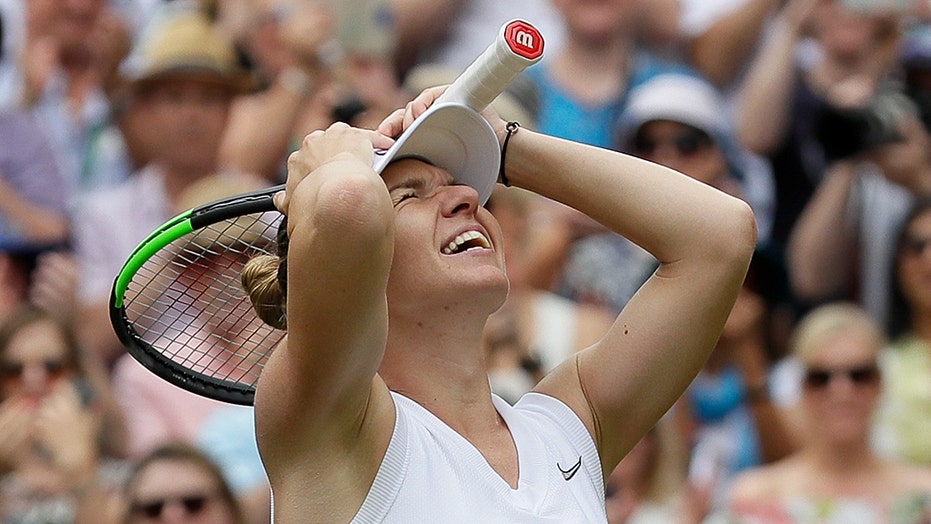 Simona Halep wasn't sure how her left foot would feel. After dropping her first set but feeling no pain, she dug in and advanced at the Western & Southern Open.

The fourth-seeded Halep had no problems with her left Achilles as she rallied to beat Ekaterina Alexandrova 3-6, 7-5, 6-4 on Wednesday, one week after she dropped out of the Rogers Cup quarterfinals because of the injury. She was tentative when she took the court.

"You are a bit scared," Halep said. "But I think I played much better in the end."

The Wimbledon champion fought off two break points in the third set and then broke Alexandrova to serve for the match. It wasn't easy , but at least it was pain-free.

"I felt slowly that I'm feeling good and I have no pain," Halep said. "I got the confidence game by game, even if she was leading me."

Top-seeded Ashleigh Barty beat Maria Sharapova 6-4, 6-1. Sharapova has had a rough time since retiring in the first round at Wimbledon with a forearm injury, losing in the opening round at Toronto after leading by a set.

Sharapova reported no physical problems, but she felt rusty because of the lack of matches due to the injury — something she can fix with practice.

"I have sat in this chair a few times where I haven't finished the match or I feel like I have a long road ahead of me in terms of recovery with the body, so, yeah, that's a positive," she said. "But there's definitely the repetition, just the feeling of being in a match. It's very different."

Barty, too, was looking to recover from an upset, losing her first match at Toronto last week, and she was satisfied with her return to the court.

"I mean, it was certainly no panic sessions after last week," she said.

Also, No. 2 seed Naomi Osaka beat Aliaksandra Sasnovich 7-6 (3), 2-6, 6-2 in a much closer rematch of their U.S. Open match last year. Osaka beat the Belarusian 6-0, 6-0 on her way to the Open title last year. Sasnovich got treatment on her left knee after falling behind 3-0 in the final set.

Osaka laughed after some of her mistakes early in the match and struggled to get momentum in her easy-going frame of mind. She bore down and closed it out.

"Some of them I was laughing at my errors because it was so ridiculous, and then other times I was laughing because, like, I was in a good mood," she said.

Eighth-seeded Sloane Stephens rallied for a 2-6, 6-4, 6-3 win over Yulia Putintseva in an evening match.

There were more upsets in the men's bracket, leaving four qualifiers in the round of 16 at an ATP Masters 1000 event for the third time in the history of the series that began in 1990. It also happened at Monte Carlo in 2001 and Hamburg in 2005.

Second-seeded Rafael Nadal withdrew before the start of the tournament because of fatigue after winning the Rogers Cup in Montreal on Sunday.

The most notable qualifier upset came from Yoshihito Nishioka, who knocked off sixth-seeded Kei Nishikori 7-6 (2), 6-4 in a matchup of Japan's top players after going sleepless the previous night.

"I was so excited to play with him because he's the hero of Japanese tennis, most of the Asian tennis," Nishioka said. "So I was very excited to play. I couldn't sleep yesterday, you know."

The two had practiced together but never faced each other in a tournament.

"Good to see he's getting stronger, growing up," Nishikori said.