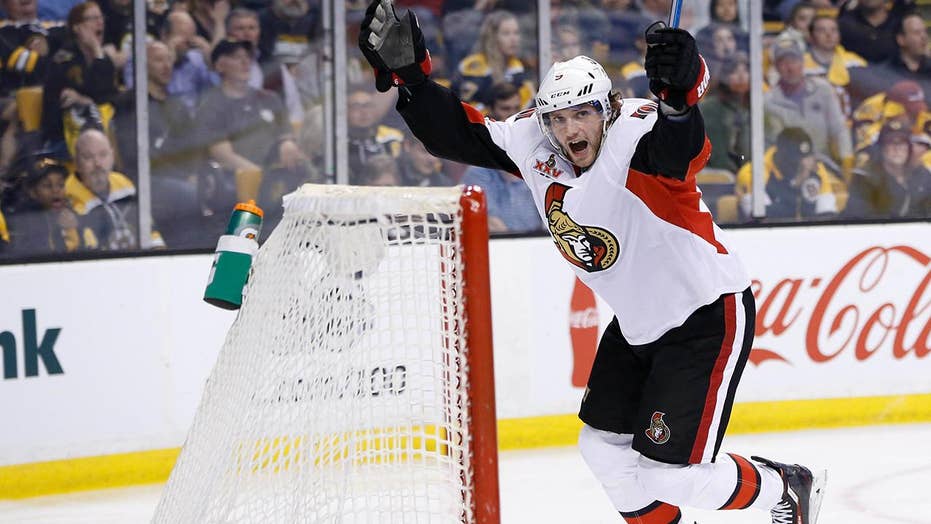 Bobby Ryan opened his eyes and was instantly frozen by fear.

The front door to his home was broken down. The 12-year-old was surrounded by men with several large guns, holding him down on the living-room couch on that dark February morning in Southern California.

He knew this day could be coming.

His father was a fugitive. His life was a lie. The end was always near.

A little more than two years earlier, the boy who would become a star forward for the Ottawa Senators — scoring four goals, with three assists in the playoffs to help set up a second-round matchup with the Rangers starting Thursday night — was known as Bobby Stevenson and living in Cherry Hill, NJ.

On Oct. 29, 1997, his father, Bob, an insurance executive, took his only child to see his favorite team (the Philadelphia Flyers) host his favorite player (Brett Hull). After the St. Louis Blues’ 3-2 win, they returned home, and Bobby went to bed.

After bringing his son home, Bob went out drinking with friends. When he returned, the interrogation began. Suspicious that his wife, Melody, was using drugs, Bob set up a tape recorder on their home phone. When he left, Melody made one call. He believed that she was trying to buy drugs, which she denied.

The former amateur boxer — who had charges from a bar fight dropped months earlier — began punching his wife and choking her. When a door stood between them, he ripped it off its hinges. The brutal scene stretched into the street. He chased her to a neighbor’s house, where the beating continued.

Melody spent the next four days at Cooper University Hospital in Camden with a fractured skull, a punctured lung, internal bleeding and four broken ribs. Bob was charged with attempted murder and five other felony counts.

Melody refused to cooperate with prosecutors, but enough evidence existed to likely convict her husband. After being released on $75,000 bail, Bob went on the run.

Robert Stevenson became Shane Ryan, adopting the surname from a movie he’d recently seen — “Saving Private Ryan.” He bounced around the United States and Canada, looking for a place where his family could safely live and his son’s growing hockey talent could thrive.

Melody forgave her husband, and after seven months apart, the family reunited in Washington, DC. Together, they drove across the country and settled in El Segundo, Calif., a town where Bob had lived for three months.

Bobby didn’t see much, though. Outside of hockey, he was largely hidden, home-schooled in their small apartment near the beach, while Bob earned money by playing poker at Hollywood Park Casino.

Their cover was nearly blown because of Bobby’s incredible talent on the ice. When he traveled to play in tournaments, multiple people from their past recognized the standout skills and told Melody they knew the family’s secret. All kept quiet, though. To his team in California, they remained the Ryans. The mother was caring. The father was involved. The son was well-liked.

Shane stopped coming to the rink in February 2000, when US marshals dragged away one of New Jersey’s most-wanted men. The facade fell apart when he used a credit card with a different alias — which the FBI was tracking — to rent a movie at Blockbuster video. The dad was arrested, extradited to New Jersey and served four years at Riverfront State Prison after pleading guilty to aggravated assault and bail jumping.

Melody, a former stay-at-home mom, worked two jobs to provide for her son and further his promising future. During the day, she worked at a hockey rink, allowing her son free ice time. At night, she worked at the airport, helping reduce travel costs.

“It’s really weird that I didn’t want to go back to my other name,” Ryan said. “I don’t know if it was because I didn’t want to be associated with everything that happened or I was getting recognition throughout the country for hockey or what it was . . . but I liked it. I felt more comfortable with it at that point for some reason.”

In 2004, Bob was released from prison. In 2005, he was back under house arrest after violating his parole to be at the draft, alongside Melody, whom Bob was prevented from seeing because of a court-enforced restraining order against her wishes.

When it was lifted, the parents got back together in New Jersey. After several years living with each other, the couple split. Now 30, Bobby still maintains a relationship with his father and had dinner with him last month while in Philadelphia to face the Flyers. Melody, who was the only one to change her name back to Stevenson, was set to remarry, but she died in July of liver cancer at age 57.