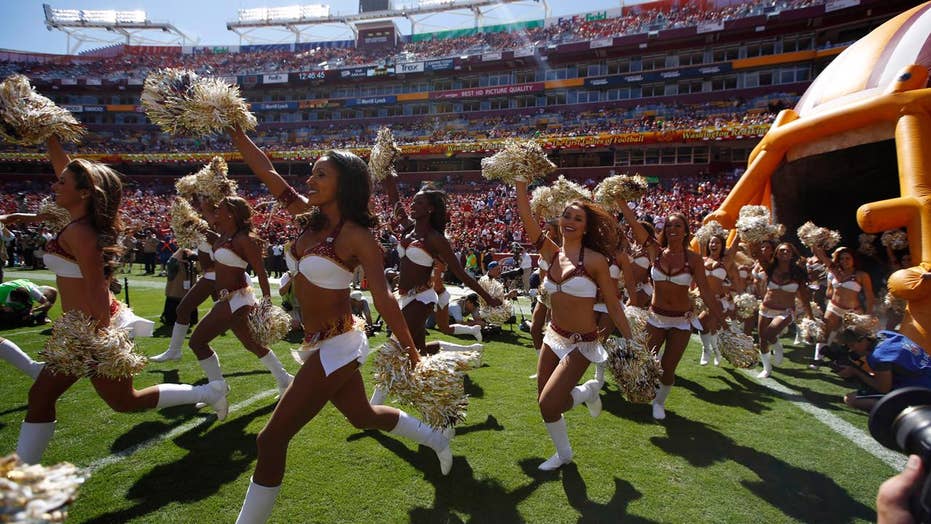 Several Washington Redskins cheerleaders claim they were reportedly forced to pose topless and act as escorts during a calendar photo shoot trip to Costa Rica in 2013.

NFL teams reportedly use “alternate cheerleaders” to mingle with fans in the seats or in luxury boxes while the actual performers are on the field during game days.

The Washington Redskins, Houston Texans, New England Patriots, New Orleans Saints and Baltimore Ravens are among the teams who use a separate cheerleading roster to serve as “scantily clad ambassadors” whose jobs are to mingle with male fans, The New York Times reported Thursday.

The Redskins, in particular, have come under fire over the last month for the way team officials have used the cheerleading squad in the past. Several Redskins cheerleaders told the Times in May that they felt they were being used as escorts during a photo shoot in Costa Rica.

The Redskins, which essentially created the ambassador position in the early 2000s, began hiring groups of women who didn’t make the cheerleading team and were judged in pageant-like sessions, according to the newspaper. A former Redskins cheerleader told the Times she felt more like a “sexualized saleswoman” than a cheerleader.

Another former Redskins ambassador said she would attend tailgate parties where intoxicated men would grab them and hug them and make lewd comments.

“It was like, 'Oh, yuck,'” the former ambassador said, adding that she would often sign autographs as “Meg” because she didn’t want others to know her real name. “I didn’t want to take the extra time to sign my real name. I was just like, 'God, can we just get this over with?'”

One former ambassador said then-head of business operations for the Redskins, Dennis Greene, would examine the women before games and choose two to accompany him while he visited suite holders.

Former Redskins ambassador says the team would steer them toward team-sponsored salons. (Reuters)

“He would look each of us up and down and say, 'I want that one and that one,' and everyone hated when you got selected for that,” the former ambassador told the Times.

“It was humiliating, like we were cattle,” she said.

Greene was demoted after The New York Times published the harrowing accounts of former ambassadors, while a team spokesman later Thursday said that he had resigned.

Several former ambassadors said that Redskins officials went as far as to steer them to a salon that sponsored the teams so they could get dressed up like a cheerleader but not actually become one.

“It was like, if you want to make the cheerleading team, you’d better do all this stuff, and that included going to parties where there was a lot of drinking and there were definitely underage ambassadors. It might not be the best experience for the ladies, but you just shut up and do it because you want to be a cheerleader,” one of the former ambassadors told the Times.

Redskins President Bruce Allen said in May the team was investigating accusations about the cheerleading squad.

“We are committed to ensuring that all Redskins employees, including our cheerleaders and ambassadors, are treated with the utmost respect,” he said.

Former Houston Texans cheerleader Jackie Chambers, who filed a lawsuit last week against the team’s cheerleading director over wages and abuse, said that the squad’s coach Alto Gary would tape cheerleaders’ stomachs down to make them appear skinnier.

“That was a memory that was so vivid, I’ll never forget it,” Chambers said. “I can’t believe that it was even happening, but the girl did as she was told. It was exactly like a master controlling a puppet.”

Chambers said she and other members of her team would be sent into the luxury suites and “get touched a lot.”

NFL faces more criticism over the treatment of cheerleaders

Attorney for ex-cheerleader says NFL has responded to request for a meeting to discuss discrimination allegations; details on 'The Story.'

In response to Chambers’ lawsuit, the Texans said in a statement: “We are proud of the cheerleader program and have had hundreds of women participate and enjoy their experience while making a positive impact in the local community. We are constantly evaluating our procedures and will continue to make adjustments as needed to make the program enjoyable for everyone.”

The New York Times also reported that the Patriots hold auditions for “cheerleader promotional models,” but after the cheerleading squad is already set.

The Ravens have a team of women called Playmakers, who don’t serve as cheerleaders or dancers in any form. The Times reported that this year’s application to become a Playmaker asked for bust size.