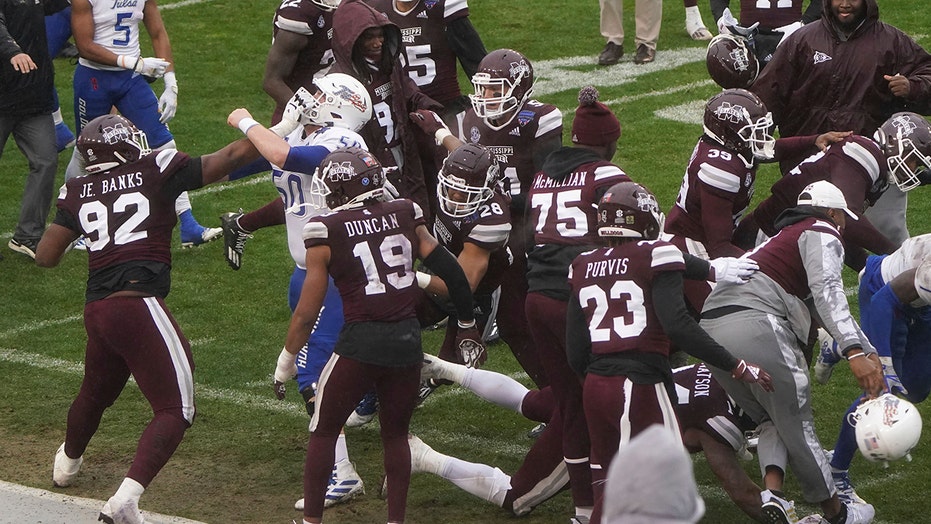 A brawl broke out Thursday after the Mississippi State Bulldogs defeated the Tulsa Golden Hurricane at the Armed Forces Bowl.

Minutes after Mississippi State edged out Tulsa, 28-26, both teams came face-to-face on the sideline and a skirmish turned into a melee.

Tulsa coach Greg Montgomery said sophomore safety Kendarin Ray was being treated for "some sort of concussion" after he was on the bottom of a pile during the scrum.

Mississippi State coach Mike Leach said he was unsure what triggered the melee.

"I’m not sure what exactly caused that," he said. "It was something before the game, too. We’ve never had any problem with that the entire season, so I can only guess without seeing the film."

Tulsa was trying for a late onside kick to make a comeback. But the team was flagged for an unsportsmanlike conduct penalty, which may have fueled the hot tempers.

Mississippi State freshman Will Rogers threw a touchdown pass and rushed for one more in the win. Bulldogs defensive back Emmanuel Forbes returned a touchdown 90 yards.