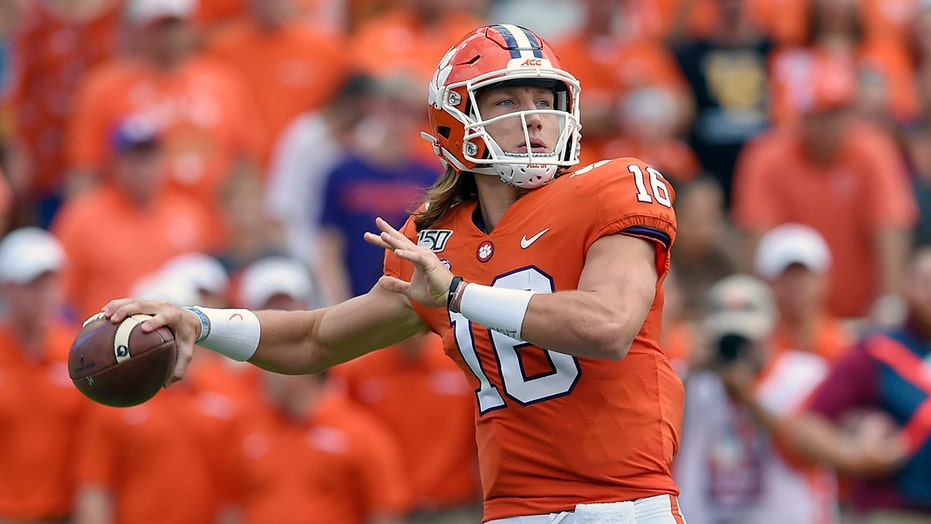 Trevor Lawrence threw for three touchdowns in just nine passing attempts, and No. 1 Clemson beat The Citadel 49-0 on Saturday.

Lawrence also rushed for his third TD already this season, leading the way as the Tigers (2-0) improved to 35-0 against teams from the Football Championship Subdivision. Clemson came out fast, stayed sharp and played just about everybody available in the runaway victory.

“Good to see that maturity and leadership, no matter who we play,” Clemson coach Dabo Swinney said.

Lawrence was 8 for 9 for 168 yards, including scoring passes of 54 and 17 yards to Frank Ladson Jr. and 44 yards to Amari Rodgers.

The Heisman Trophy favorite was largely done when Clemson went up 28-0 in the first quarter. He returned for one second-quarter series and quickly added points with a perfectly thrown pass down the left side to Ladson.

Two-time reigning ACC player of the year Travis Etienne ran for 68 yards on only eight carries, joining Lawrence as a happy spectator for most of the day.

Clemson’s defense shut down the Bulldogs' triple-option, holding them to 86 yards on the ground after they rushed for 200 yards last week at South Florida. The Tigers posted their first shutout since defeating Ohio State 31-0 in the CFP semifinals in 2016.

“To me defensively, that was the story of the day,” Swinney said. “To hold those guys out of the end zone for four quarters, that's almost impossible.”

Skalski was pleased with his touchdown. He was even happier about the shutout.

“When you're a defensive guy, that's what you want to do, get that goose egg,” he said.

Backup quarterback D.J. Uiagalelei, the freshman heir apparent to Lawrence, rushed for his first two college touchdowns in the rout against the Bulldogs (0-2).

It was a satisfying show for the crowd of 18,609 for Clemson's first home game amid the coronavirus pandemic. The state of South Carolina gave approval for the Tigers to host about 19,000 people, less than a quarter of their 81,500 capacity at Memorial Stadium.

Tailgaters were spaced far apart for pregame meals and cornhole contests. Once inside, people sat in socially distant rows.

The sidelines were solely for the teams, with cheerleaders, the Tiger mascot and marching band moved to the stadium's hill.

Clemson's celebrated stadium entrance was one of the few game-day traditions that remained, with Swinney pulling down his Tiger Paw mask to excite the crowd before the team touched Howard's Rock and sped down the hill.

The Tigers, who wore helmet stickers in support of social justice at Wake Forest last week, continued those initiatives when they stood locked arm-in-arm on the sidelines after the opening quarter while a message on the scoreboard flashed “Unity. All In. Together.”

Swinney encouraged fans to stand up in support of his team.

Black boxes 10 yards long on both sidelines had the words “Unity” and “Equality."

The Citadel: The best thing about this one for the Bulldogs could be the $450,000 they got from Clemson for the game. Although, they did hold the Tigers backups off the scoreboard the final two quarters with two fourth-down stops and a fumble recovery.

Clemson: The Tigers put the game away early and no one got hurt heading into an off week. Lawrence and Etienne continued their strong play and look more than ready to keep dominating when ACC play continues in two weeks.

Since Clemson was only top-six team playing, it's hard to imagine any change with the Tigers' No. 1 ranking.

The Citadel coach Brent Thompson said he declined the offer to shorten the last two quarters or use a running clock for the final 30 minutes.

The Citadel plays its only home game of its four-game fall schedule against Eastern Kentucky on Saturday.

Clemson continues its three-game homestand against Virginia on Oct. 3.