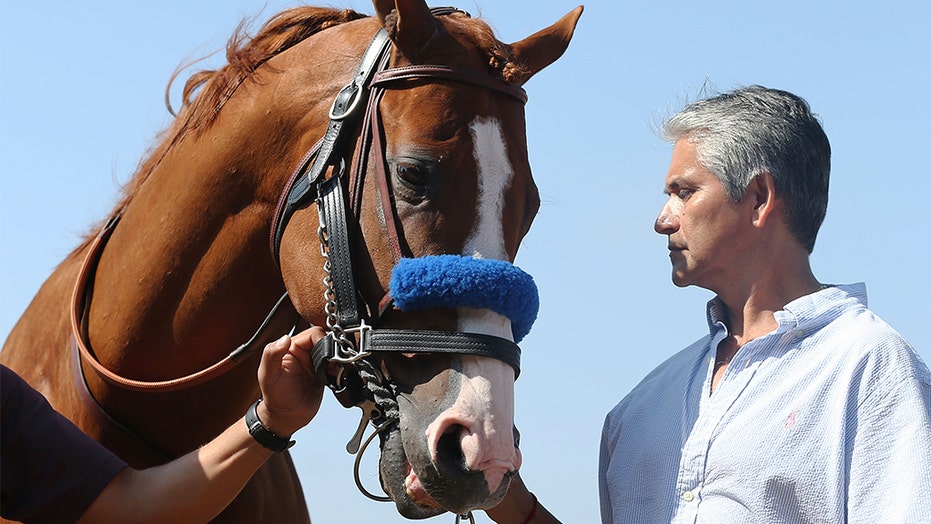 Triple Crown winner Justify failed a drug test in California just two months before he ran in the Kentucky Derby, which should have disqualified him from the race, according to a report.

Justify, handled by Hall of Fame trainer Bob Baffert, tested positive for the drug scopolamine on April 7, 2018, after winning the Santa Anita Derby, which qualified him for the Kentucky Derby.

Justify is paraded for fans after being retired from racing at Del Mar Thoroughbred Club in July 2018. (Getty Images)

The California Horse Racing Board -- whose chairman, Chuck Winner, owns an interest in Baffert's horses -- took more than a month to confirm the drug test results. Had they done so sooner, Justify would have been disqualified from the Kentucky Derby and prevented from becoming the 13th Triple Crown winner since Sir Barton in 1919.

The New York Times reported Wednesday that Baffert was notified of the failed test results just nine days before the Derby, despite the results being available as early as April 18. Baffert asked that another sample from his horse's April exam be tested and sent to an approved independent lab, but the findings of that exam came in after Justify had already won the first leg of the Triple Crown.

Jockey Mike Smith rides Justify down the final stretch to victory in the Belmont Stakes and the Triple Crown on June 9, 2018 at Belmont Park in Hempstead, NY. (Getty Images)

Rick Baedeker, executive director of the California Horse Racing Board, notified the board members that Justify had tested positive for scopolamine, alerting them that “The C.H.R.B. investigations unit will issue a complaint and a hearing will be scheduled,” but neither came to fruition, the Times reported.

After Justify won the Triple Crown, the CHRB voted unanimously to throw out the inquiry into the horse's potential drug use, attributing the levels of scopolamine to potentially contaminated food, as the drug can be found in jimson weed that can potentially be mixed in with horse feed.

In October, the Times reported that the board also changed the penalty for a scopolamine violation to the lesser penalty of a fine and possible suspension, whereas in the past similar violations have resulted in disqualifications, forfeitures of prize money and suspensions.