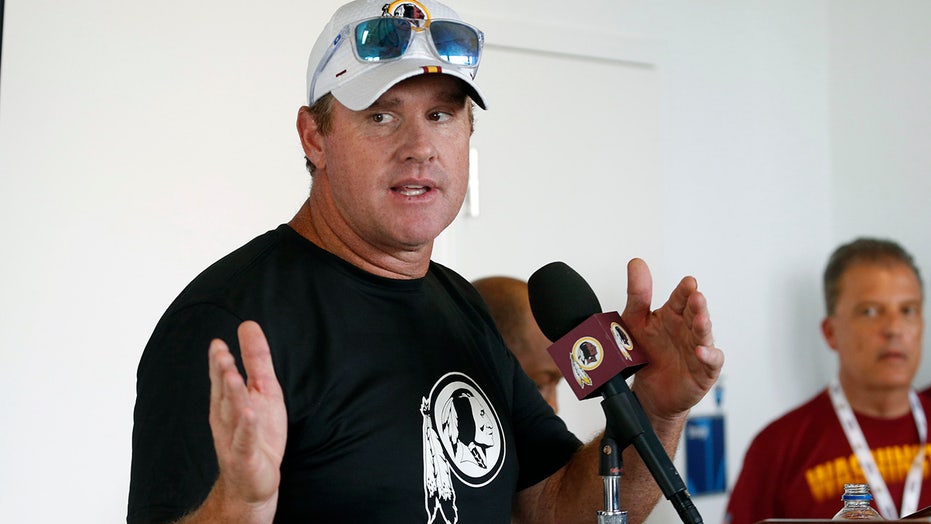 “I have had people with me who have been first-time coordinators, and I think you go through a learning process and you’re getting better each year,” Marrone said. "There is a (learning) curve to that. ... I don’t have time for that curve.

"I was looking for someone with experience, someone with conviction with what they believe in that matches what mine and our staff believe. Our staff was heavily involved in this, too. We all had time spent with each candidate that came in and together we made a collective decision on what was best for all of us.”

Gruden replaces John DeFilippo, who was fired earlier this month after just one season. DeFilippo has since been hired as Chicago's quarterbacks coach.

The Redskins fired Gruden in early October following an 0-5 start. Gruden was 35-49-1 in five-plus seasons in Washington and reached the playoffs once. He previously served as Cincinnati's offensive coordinator (2011-13) and guided quarterback Andy Dalton to his best season before leaving for Washington.

Marrone wanted an experienced play-caller to pair with second-year quarterback Gardner Minshew and one of the league's youngest offenses.

“You try to pick out spots that you’re looking for,” Marrone said. “Diversity of quarterbacks, diversity of the offense, having the ability to not try to plug a square peg into a round hole.”

The move also could lead to another opportunity for Gruden, who would have a decent chance at becoming Jacksonville's interim coach if Marrone doesn't get the team turned around early next season. The Jaguars have lost 20 of their last 28 games.

Owner Shad Khan opted to keep Marrone and general manager Dave Caldwell despite a public outcry for change. Marrone and Caldwell have two years remaining on their contracts, and Khan has made it clear that expectations will be high going into 2020.

It could mean a win-or-else situation for Marrone and his staff.

Gruden becomes Jacksonville's fourth play-caller in the last three years. Marrone fired Nathaniel Hackett in the middle of the 2018 season, replacing him with quarterbacks coach Scott Milanovich. Milanovich returned to his position as quarterbacks coach this season and worked alongside DeFilippo, who was reunited with free-agent quarterback Nick Foles. “Flip” and Foles helped bring Philadelphia a Super Bowl victory in 2018.

Foles broke his left collarbone early in the season opener, missed eight games and then was benched in his third game back. Minshew went 6-6 as the starter and is expected to get first crack at the job in 2020. The Jaguars, at least for now, plan to keep Foles as a high-priced backup. Cutting Foles would count $34 million against the salary cap next season.

Marrone still needs to hire a quarterbacks coach to replace Milanovich, who left to became head coach of the CFL's Edmonton Eskimos.

“I don’t know if we’re going to go down that path or not,” Marrone said. "We’re just discussing those options now as we go forward. At the end of the day, we’re going to do what’s best for the players and the staff. So it’s really an option. We’re not leaning one way or the other.”