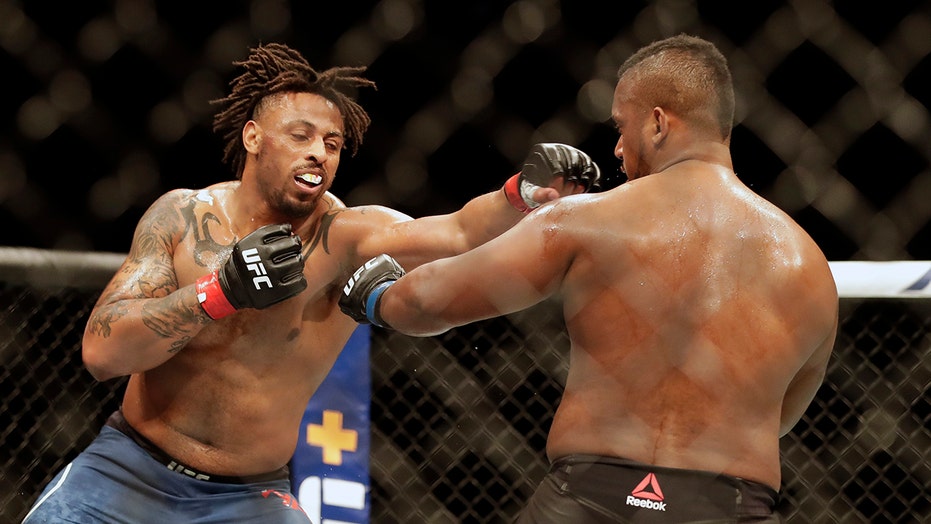 Greg Hardy participated Saturday in UFC 249 – the first major sporting event to occur in North America since the coronavirus pandemic shut down the sports world.

Hardy defeated Yorgan De Castro for his sixth win in the company. The match took place without any fans in attendance and several UFC personnel in masks.

Hardy said there was one reason why having no fans was a “game-changer.”

Hardy said he heard some of the announcers, including Daniel Cormier, critiquing him during the match. Cormier had said that Hardy needed a way to counter De Castro’s kicks. Hardy was listening and later won via unanimous decision.

“Thank God for not having the crowd. Shout out to D.C.,” Hardy said.

“I heard him tell me to check him, that I needed to figure out how to check it ... so I started trying to check him! Game changer!”

Before taking on opponents in the ring, Hardy played six seasons in the NFL between the Carolina Panthers and Dallas Cowboys. Hardy was a source of controversy in the NFL as he was suspended 10 games in 2015 after he was arrested for domestic violence in 2014. His suspension was later reduced to four games and the chargers were later dismissed, according to the Charlotte Observer.

UFC seemingly went off without a hitch. Dana White said he thought of the idea of having social-distancing and other coronavirus measures would be a challenge, but he knew the company would prevail.

“I knew we could do this,” he said in the post-UFC 249 press conference. “I knew we could figure it out. Even with all the hurdles that we had early on, this has been fun. It’s been challenging and it’s been fun.

“I know that sounds a little demented to say I’ve had fun going through this. It’s been challenging and I’ve enjoyed the whole game of it, if you will.”

UFC has two more fights scheduled later this week in the Jacksonville, Fla., facility. The company plans to administer more than 1,000 more coronavirus tests for everyone involved in the fights.

“However it was handled this week, this was our first week,” White said. “It will only get better. And we can share what we learned here doing three events with other sports leagues who are reaching out to us and asking.

“A lot can be learned by what we’re doing here. Not just for professional sports, but for sending people back to work and lot of other things in life.”