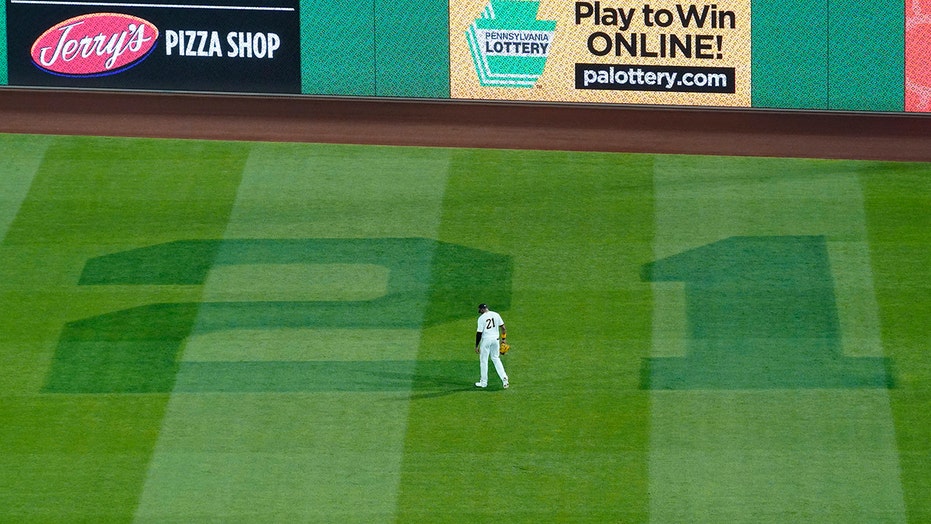 Roberto Clemente's iconic No. 21 has been a fixture in Pittsburgh for more than 60 years. Its presence has only grown since the Hall of Fame outfielder's death at age 38 on New Year's Eve 1972 in a plane crash off the coast of his native Puerto Rico.

His jersey remains one of the franchise's most popular. It adorns the right-field wall named after him at PNC Park. It's ubiquitous in the stands during Pirates home games and on post-game strolls along the Allegheny River. First-year manager Derek Shelton has even caught his neighbors rocking it while cutting the grass.

On Wednesday night, the number found itself in a place where it hasn't been for nearly a half century: on the back of a member of the Pittsburgh Pirates. All of them.

The Pirates celebrated Clemente's legacy by wearing his number during the organization's first “Roberto Clemente Day" against the Chicago White Sox. The number was mowed into the right-field grass a few hundred yards from where Clemente stood at Three Rivers Stadium.

“He’s our Jackie Robinson,” said current right fielder Gregory Polanco, who is from the Dominican Republic. “He’s our idol. He’s the Great One, man. He’s the player we all know growing up, like, 'Hey, Clemente. He was the man. It was outside the baseball field. That’s what makes it even more, the greatest person, what he did and the way he was helping people always.”

Major League Baseball granted the Pirates permission for everyone to don No. 21 last week, then extended it to all Puerto Rican-born players.

Clemente's family and the team he represented are hoping the league will one day honor Clemente by retiring his number across all of MLB as it did for Robinson's No. 42 in 1997.

“He deserves that,” Polanco said.

The Pirates made sure to extend the tribute beyond the walls of PNC Park, where the Roberto Clemente Bridge stands. The team partnered with the Greater Pittsburgh Community Food Bank to host a drive-through food distribution early in the day. They hosted a meal and mask distribution at the Latino Community Center and bought gift subscriptions to the New Pittsburgh Courier — a newspaper focusing on the city's Black community — for local libraries.

The day was also celebrated in Clemente's hometown of Carolina, Puerto Rico ,and elsewhere across the island. Pirates third base coach Joey Cora, born in Caguas, Puerto Rico, received pictures of friends from back home of Puerto Ricans wearing their own No. 21 jerseys.