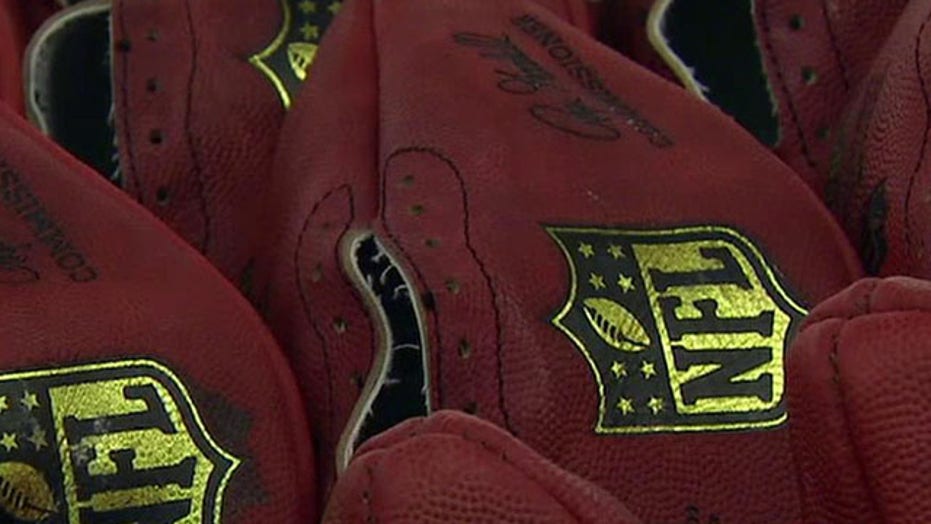 How Super Bowl footballs are created before the big game

Less than a week away from the Super Bowl, footballs are dominating the conversation.

Over the weekend, New England Patriots coach Bill Belichick threw out terms not typically heard from a football coach – PSI, atmospheric pressure, and a surprising reference to the movie “My Cousin Vinny.”

"I'm not going to say I'm Mona Lisa Vito of the football world as she was in the car expertise area, all right?," Belichick said on Saturday.

Ada, Ohio would seem far away from the controversy surrounding the New England Patriots’ deflated footballs in the AFC Championship game.  In reality, this small town about an hour south of Toledo is where every NFL match-up begins.

“We wonder each and every time that ball hits the field - was that the one that I laced? Did I do that ball?,” Sue Nichols tells Fox News as she laces up a football.

Nestled in this small town is the Wilson Sporting Goods’ Football Factory, which pumps out more than 3,000 footballs a day and more than 7000,000 a year – each one made by hand to meet the NFL’s stringent standards.

After 71 years as the league’s exclusive manufacturer, it’s a meticulous process that Wilson has down to a science.

High-quality cowhides are cut into the oval panels that make-up a football’s “skin.”  After being stamped with the NFL logo, four panels are sown together inside-out using heavy-thread, and then steamed to help soften and stretch the leather.

The balls are then passed to “Lacers” like Sue Nichols, a skilled 27-year veteran at Wilson’s football factory, who turn them right-side-out, throw a rubber bladder inside, and add laces to seal each ball up.

“This is kind of like our Super Bowl for us. We make a ball that nobody else makes. And it's a ball that's made right here in the United States and we take pride that we're the only ones that do that," Nichols says as her hands deftly work their way around another football.

The final touch, and one most sports fans are very familiar with now, is inflating each ball until it has 13-pounds of air pressure inside – right down the middle of the NFL-mandated range of 12.5-13.5 pounds of pressure.

“The balls leave here they have 13 pounds of air in them, and that’s our goal here to send out a quality football,” explains Wilson Factory Manager, Dan Reigle.

The football factory shipped out 104 game balls for the Super Bowl to the New England Patriots and Seattle Seahawks the day after the championship game was decided.

Wilson is making about 10,000 commemorative Super Bowl footballs to be sold in shops around the country.  Each ball will sell for roughly $130, and we’ve been told they will come fully inflated.