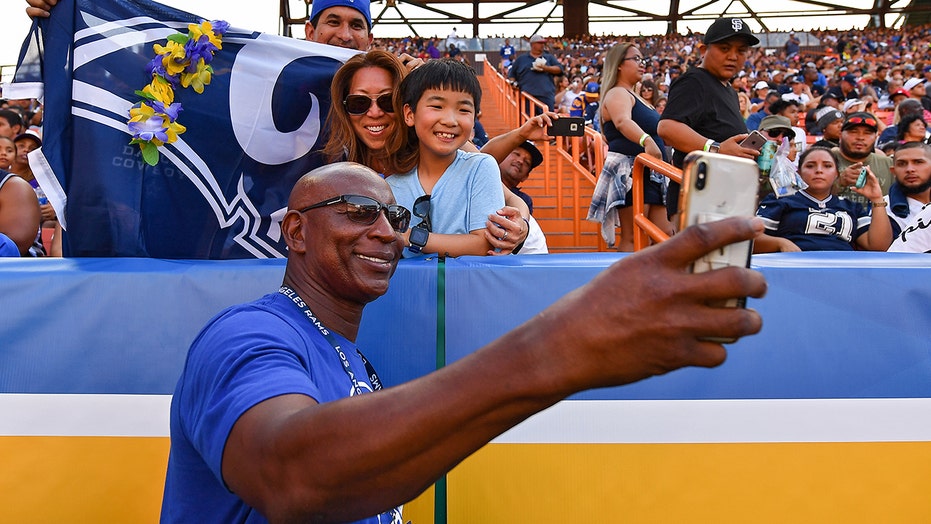 Legendary NFL running back Eric Dickerson expressed his displeasure with the new Los Angeles Rams logo over the course of the week and on Wednesday he said he would speak to the team about it.

Dickerson, who played for the Rams from 1983 to 1987, tweeted two logos that have gotten the most positive responses as replacements for what the team released Monday.

".@RamsNFL fans, thanks again for all your passionate responses. The two logos below received the most support. I have noted your feedback for tweaks to each logo. I’ll share these with the Rams and our thoughts on why we love and take pride in our old logo. Proud to be your voice," he wrote.

Dickerson also voiced his frustration on “The Doug Gottlieb Show” on Monday.

Dickerson said it was explained to him that the logo change was part of an effort for the Rams to create their own identity in the city.

This graphic provided by the Los Angeles Rams shows a new stylized LA Rams logo, released by the NFL football team Monday, March 23, 2020. The Los Angeles Rams unveil their new logo and color scheme with somewhat less fanfare than originally planned. The team is mildly reconfiguring its look four years after returning home to LA, and a few months before moving into SoFi Stadium. New uniforms will follow later in the spring. (Los Angeles Rams via AP)

“I said, that has nothing to do with nothing,” he said. “The players who played there, you give them respect. Anybody who plays under the Rams' logo, no matter where they were, played for the Rams.”

The Rams’ new primary logo features an “LA” with a ram’s horn curved around the letters, while the secondary logo is a modern update of the classic ram’s head logo occasionally used by the team in previous decades. New uniforms will also be revealed later in the year.