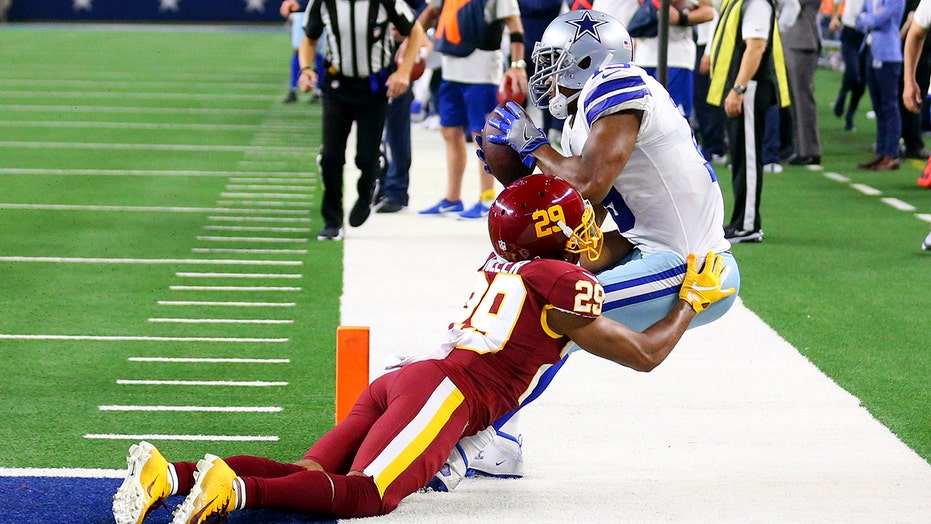 Dallas Cowboys wide receiver Amari Cooper posed the challenge for the offense to get him more involved and for it to be more explosive with a few games left in the regular season.

Cooper’s teammates answered the call and dropped 56 points on a frustrated Washington defense. The Cowboys won the game 56-14.

Amari Cooper #19 of the Dallas Cowboys catches a touchdown pass during the second quarter against the Washington Football Team at AT&amp;T Stadium on December 26, 2021 in Arlington, Texas. (Richard Rodriguez/Getty Images)

The veteran wide receiver led the team with seven catches for 85 yards and a touchdown in the offensive onslaught. He was targeted 11 times.

According to ESPN, Prescott became the first quarterback in NFL history to throw a touchdown pass to a running back, wide receiver, tight end and offensive lineman in a single regular game. Kurt Warner did the same thing in a 1999 playoff game.

It was Prescott's first multi-touchdown game since Thanksgiving.

Dallas came into the game with the division title already wrapped up and their rout of Washington appeared to be a warning to the rest of the league about what they’re capable of moving forward.

The Cowboys’ offense frustrated Washington so much, two Washington players got into it with each other on the sidelines.

Washington Football Team defensive tackle Daron Payne sits on the bench in the second half of an NFL football game against the Dallas Cowboys in Arlington, Texas, Sunday, Dec. 26, 2021. (AP Photo/Roger Steinman)

Defensive linemen Daron Payne was seen pushing and poking his fingers into the head of Jonathan Allen as the team went down 28-7 in the second quarter. Allen responded by taking a swing at Payne. The moment underscored just how bad the night was going for the team.

Washington’s lone score came on a touchdown pass from Tyler Heinicke to Antonio Gibson in the second quarter. Heinicke only completed seven passes for 121 yards. He was picked off twice and sacked four times.

DeMarcus Lawrence had an interception and returned it for a touchdown. Trevon Diggs added his 11th interception of the season. Lawrence, Jayron Kearse, Micah Parsons and Dorance Armstrong each had a sack.

The Cowboys can now begin to build momentum for the playoffs. Dallas moved to 11-4 with games against the Arizona Cardinals and Philadelphia Eagles on the docket.

Washington dropped to 6-8 with the loss. The Eagles and New York Giants are left for them.