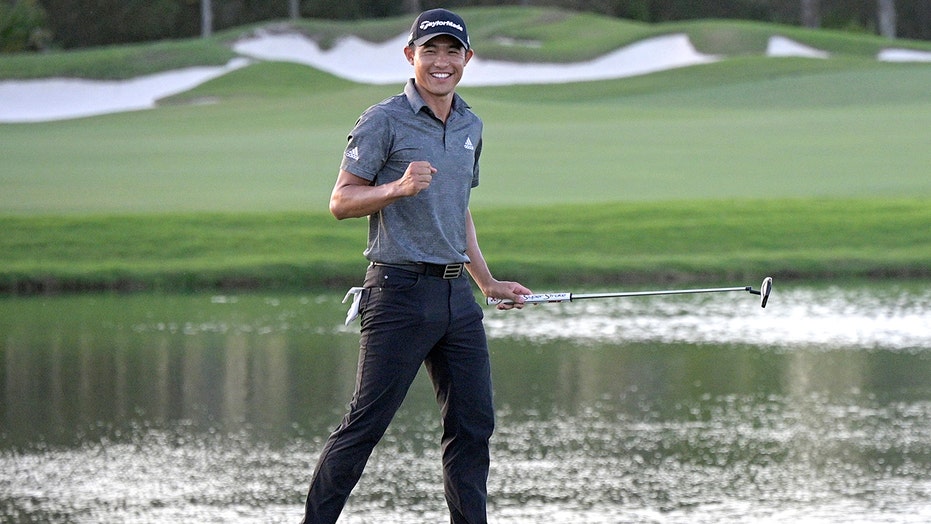 The red shirt for Collin Morikawa to wear on Sunday at the Workday Championship never arrived in time.

The comparisons with Tiger Woods keep coming up in other ways.

When Morikawa turned pro in 2019 after graduating from Cal, he began his PGA Tour career by making the cut in 22 consecutive events. That was the longest such streak since Woods began his career making 25 in a row.

Morikawa became a youthful footnote in history at Torrey Pines last year when he was in the same group with Woods. It was the first time Woods had played alongside someone who was born after he turned pro.

Most notable about his three-shot victory at The Concession against another stacked field was the 24-year-old Morikawa joined Woods as the only players to win a major and a World Golf Championship before turning 25.

Some context is in order.

Each year, the pool of young talent keeps getting deeper.

Morikawa didn't wade into the pool. It was a cannon ball. In his fourth event, he lost out to an eagle on the final hole in Minnesota to Matt Wolff. Two events later, he won the Barracuda Championship with a cool precision in the final holes that quickly is becoming his trademark.

He won at Muirfield Village last summer by making a 25-foot birdie putt in a playoff right after Justin Thomas had holed a putt from twice that long. He won the PGA Championship at Harding Park by changing his plan as the situation warranted, hitting driver on the reachable par-4 16th to 7 feet for eagle.

That's four PGA Tour victories in his first 39 starts as a pro. The only better start since 1990 was Woods, who had seven victories (including a 12-shot victory in the Masters) in the same span.

No one should suggest Morikawa is on the same trajectory as Woods. It's way too early for that, and Morikawa doesn't have nearly the same skill set, starting with power.

Even so, he has done enough — and looks good doing it — to warrant a prominent spot in any conversation about golf's leading stars.

"I've said for a year or plus now, he's the one that everyone's got to look out for," Billy Horschel said after his runner-up finish to Morikawa. "Yeah, he doesn't hit it 320-plus. I can't say it's overrated — it's helpful out here — but if you can't hit straight and put it in the fairway, then it doesn't give you any advantage."

Morikawa hits it straight. He didn't miss a fairway in the final round after the opening hole, and that made it tough for anyone to catch him on the back nine.

Most telling was his thought process down the stretch at Concession. The biggest putt was a 12-footer for par on No. 11 and an 8-foot birdie putt on the short par-4 12th as a cast of contenders were closing in. He had two par 5s ahead of him. But with his lead back at three and no one making a move, he applied pressure by not making mistakes.

"Yes, I wanted more birdies coming down the stretch, but guys weren't really making birdies, so it wasn't forcing me to keep up with their pace, as well," Morikawa said.

He didn't have a red shirt, like a dozen other players Sunday, to show support for Woods as he recovers from serious leg injuries suffered in his Los Angeles-area car crash. Morikawa honored his golfing idol by playing like he would in that situation.

McIlroy has never played with Morikawa on the PGA Tour, though he has seen enough because McIlroy pays attention to everyone, and he has been around him during TaylorMade commercial shoots.

"He makes a really good move at it; clubface stays so stable through impact," McIlroy said. "It’s sort of hard to think that he could hit a ball offline. Great iron player. And I think the thing with Collin is when he gets the putter going, he’s always going to have a chance."

Morikawa says he has never felt comfortable with his putting — remember, he missed a 6-foot birdie putt on the 18th hole and a 3-foot par putt in a playoff to lose at Colonial. He heard about Hall of Fame member Mark O'Meara using a "saw" putting grip and decided to try it out. Then, wisely, he caught up with O'Meara the next day and talked to him for an hour.

His chipping was a mess on the Bermuda grass at Concession. He called over Paul Azinger, a Concession member and NBC analyst, for Azinger to show him a few techniques. The chat lasted 10 minutes and paid big dividends.

"It saved my life this week," Morikawa said with exuberance and possibly a bit of exaggeration.

He already is winning big and always learning, a nice combination going forward.