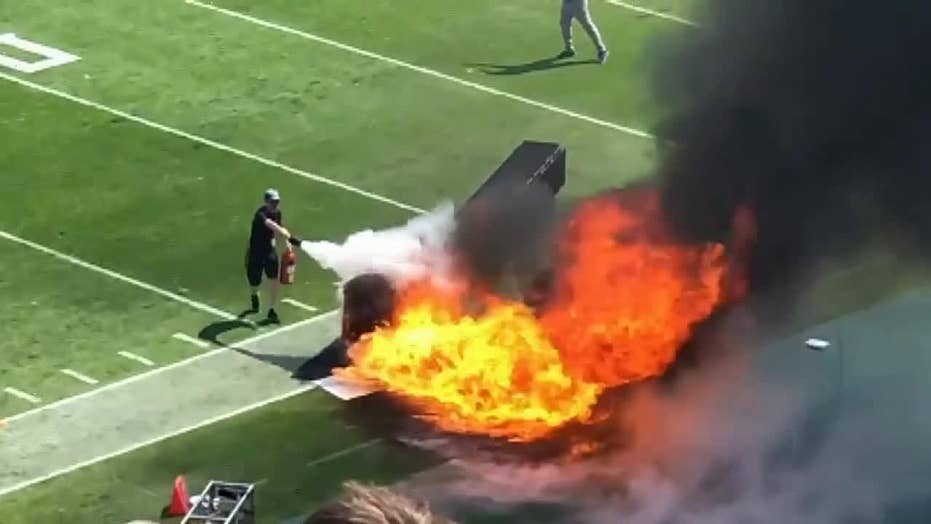 Fire sparks during Titans' pregame ceremony for their home opener at Nissan Stadium in Nashville, Tennessee on Sunday.

A fireworks display during the Titan's pregame entrance set part of the field ablaze, which field crews quickly extinguished.

A game between the Indianapolis Colts and Tennessee Titans got off to a scorching start as a large fire erupted at Nissan Stadium in Nashville just before both teams were set to play.

A piece of pyrotechnics equipment designed to shoot flames during introductions ignited near the sidelines where Titans players usually enter the field, making for a crazy scene on Sunday afternoon just prior to the singing of "The Star-Spangled Banner."

One of the flame-throwing boxes tipped over toward the stands, setting the turf on fire as the Titans celebrated the jersey retirements of former players Steve McNair and Eddie George, ESPN reported.

A fire from a pyrotechnics machine burning on the field before the game between the Tennessee Titans and the Indianapolis Colts on Sunday. (AP Photo/James Kenney)

It could be seen blowing hot flames toward the spectators in a manner that resembled a massive flamethrower. Smoke blew out from the flames into the air toward spectators sitting nearby who were forced to move back a few rows to safety.

Stadium employees quickly extinguished the fire. The start of the game was unaffected by the eruption and no one was injured.

Crews extinguishing the fire before the game in Nashville. (AP Photo/Wade Payne)

Crews reportedly covered the pyrotechnics machine with sand following the incident, and all that remained was a charred mound on the sidelines.

"There was a mechanical failure by one of the pyrotechnic devices which resulted in a fire," the team later said in a statement. "The vendor will be required by the state of Tennessee to undergo an inspection for the defective device and the others that were used to determine the final cause."