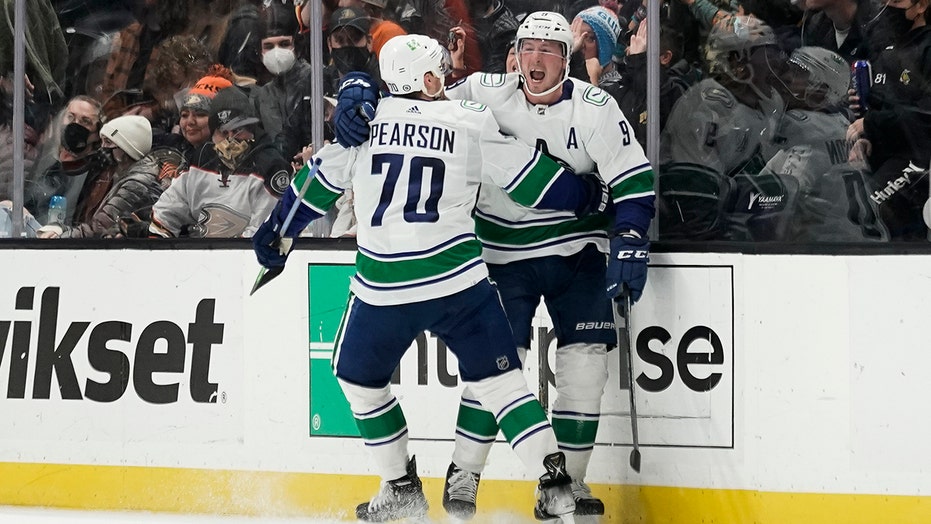 J.T. Miller and the Vancouver Canucks remain unbeaten with Bruce Boudreau behind the bench.

Miller scored 26 seconds into overtime and the Canucks beat the Anaheim Ducks 2-1 Wednesday night for their seventh straight win since Boudreau was brought in.

Boudreau is the third coach in NHL history to start 7-0 with a new team, matching Geoff Ward in 2019-20 with Calgary and Jacques Lemaire in 1993-94 with New Jersey.

Five of the wins have been by one goal, with three going into overtime or a shootout.

"We are not doing a whole lot of different things than we were doing when we were losing, to be quite honest. I think we are rounding into a more complete game right now," said Miller, who has a seven-game point streak with three goals and 11 points. "We are finding ways to win. I think we’re tired of saying we’re playing good and losing."

Miller assisted on Tanner Pearson's tying goal early in the third period then got a breakaway chance in overtime. He put a wrist shot past John Gibson for his 11th goal of the season.

Boudreau took over Dec. 3 following a leadership purge in which two Canucks executives, coach Travis Green and an assistant coach were fired.

Vancouver was in last place in the Pacific Division with a record of 8-15-2 when Boudreau was hired. They are seventh in the Pacific now, but only four points back of third.

Boudreau was working in familiar territory Wednesday — he coached Anaheim for nearly five seasons (2011-16) and led the Ducks to four postseason appearances. However, the Canucks had won only two of their last 10 against Anaheim and were 0-3-2 in their last five.

"We had some real Grade-A chances in the last two periods, so, really proud of them. They just gutted it out, and there’s a will to win, and that took over," Boudreau said.

Both teams looked rusty after not playing in nearly two weeks as COVID-19 caused league-wide interruptions to the schedule. The Canucks were playing their first game since Dec. 16 while the Ducks were in action for the first time in 12 days.

"The first period kind of felt like we had been off for two weeks, but as the game went on I got more comfortable," Pearson said. "You know, you kind of expected that. We knew it wasn’t going to be a pretty one."

Thatcher Demko made 22 saves for Vancouver. He has won a career-best six straight in net and has a 1.30 goals-against average.

Sam Carrick scored Anaheim's only goal and Gibson stopped 35 shots. The Ducks have dropped their last two but have collected points in 10 of their last 11 games.

"We’re going to have to get back in the rhythm of playing, practicing and finding that structure," Ducks coach Dallas Eakins said. "We had it at times, and other times, we did not. Expected, but still disappointing."

Carrick got behind the defense, took a stretch pass from Hampus Lindholm off the left side of the boards and put a wrist shot past Demko at 16:26 of the first period for his seventh goal of the season and third in the last seven games.

Pearson evened it 1:21 into the third when he took a cross-ice pass from Miller and scored from the right circle. It was Pearson's fifth of the season and his first since Dec. 1.

Anaheim defenseman Cam Fowler suffered an upper-body injury during the first period while vying for the puck with Vancouver’s Quinn Hughes. Fowler lost his balance and awkwardly hit the corner boards with his shoulder and head behind the Ducks’ net.

Ducks: Play at Vegas on Friday.