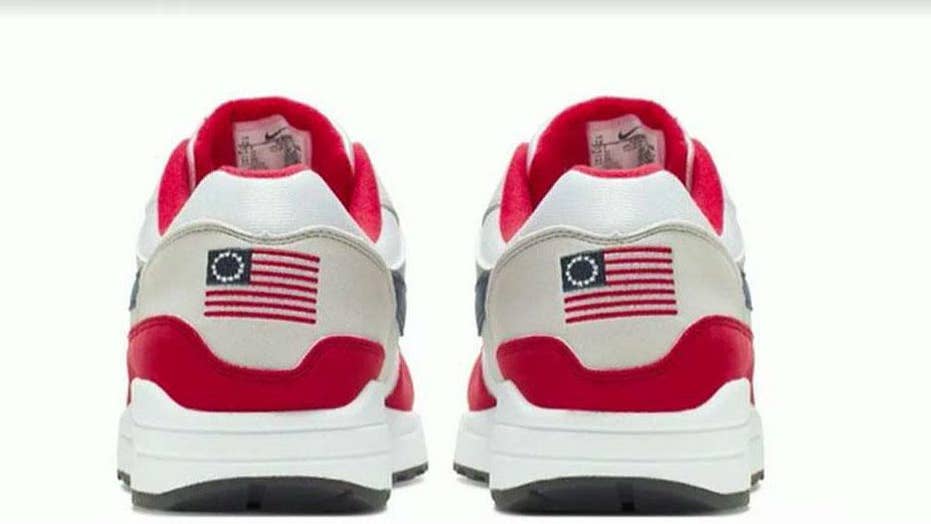 Arizona Gov. Doug Ducey announced Tuesday he was ordering the Arizona Commerce Authority to withdraw incentives for Nike building a manufacturing plant in the state.

Ducey made the announcement in a series of tweets after The Wall Street Journal reported that former San Francisco 49ers quarterback Colin Kaepernick urged Nike to nix a USA-themed sneaker, which featured a Betsy Ross flag on the heel, over slavery connotations.

“Words cannot express my disappointment at this terrible decision. I am embarrassed for Nike,” Ducey, a Republican, tweeted. “Nike is an iconic American brand and American company. This country, our system of government and free enterprise have allowed them to prosper and flourish.

"Nike has chosen not to release the Air Max 1 Quick Strike Fourth of July as it featured the old version of the American flag," a spokeswoman reportedly said.

“Instead of celebrating American history the week of our nation’s independence, Nike has apparently decided that Betsy Ross is unworthy, and has bowed to the current onslaught of political correctness and historical revisionism. It is a shameful retreat for the company. American businesses should be proud of our country’s history, not abandoning it.

“Nike has made its decision, and now we’re making ours. I’ve ordered the Arizona Commerce Authority to withdraw all financial incentive dollars under their discretion that the State was providing for the company to locate here. Arizona’s economy is doing just fine without Nike. We don’t need to suck up to companies that consciously denigrate our nation’s history.

“And finally, it shouldn’t take a controversy over a shoe for our kids to know who Betsy Ross is. A founding mother. Her story should be taught in all American schools. In the meantime, it’s worth googling her.”

Nike planned to build a massive manufacturing plant in Goodyear, investing $184.5 million, according to ABC 15. The plant reportedly was going to create more than 500 jobs.

Goodyear agreed to waive nearly $1 million in plan review and permit fees to bring the plant into the city, The Arizona Republic reported. The city also planned to reimburse Nike $1 million for the jobs the company was set on creating.

Kaepernick reached out to Nike officials and expressed that the flag that was featured on the back of the shoes could be an offensive symbol because of its connection to a slavery era, according to The Wall Street Journal.

In response, a Nike spokeswoman told the Journal: “Nike has chosen not to release the Air Max 1 Quick Strike Fourth of July as it featured the old version of the American flag.”

The sneaker originally was slated to be released on Monday, and posts hyping its release said it would cost $140.

Kaepernick, the former quarterback who famously kneeled during the National Anthem starting in 2016, was named as the face of Nike’s latest “Just Do It” campaign last year. After the announcement, Nike’s stock initially fell more than 3 percent, before online sales increased.