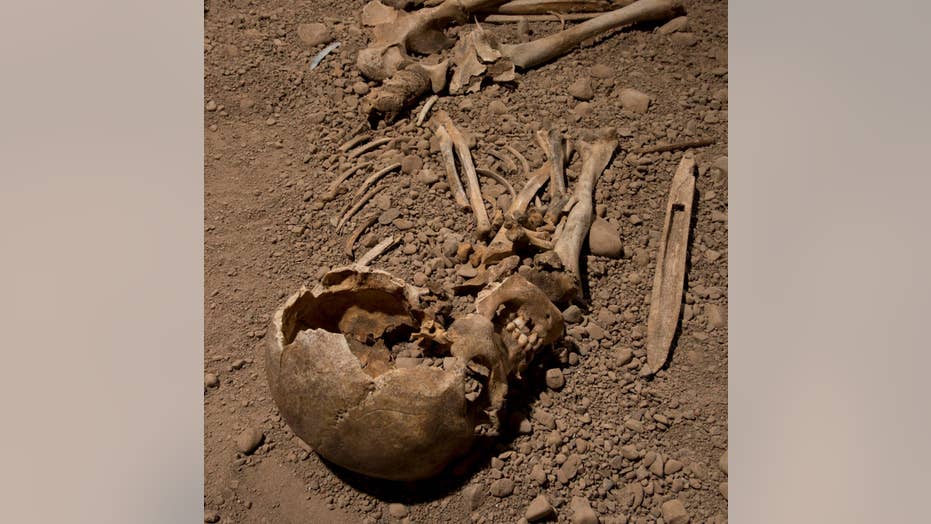 An international team of researchers is shedding new light on the mysterious ancient “Battle Axe Culture” of Scandinavia.

Experts studied bones recovered from a burial site discovered in 1953 during the construction of a traffic circle in Linkoping in southern Sweden. The Battle Axe Culture is named after the battle axe that was buried with the remains of a man, a woman and a child. A dog was also buried at the Linkoping burial site.

A study on the research has been published in the journal Proceedings of the Royal Society B.

The Battle Axe Culture dates back around 5,000 years and is said to resemble another ancient group of people, the European Corded Ware Culture, named for the cord-like designs on its pottery.

The skeleton of a male individual associated with the Neolithic Age Battle Axe culture on exhibition in Linköping, Sweden. (Jonas Karlsson, Östergötlands museum)

Using genomic sequencing, the Linkoping bones were compared to the remains of other prehistoric individuals from what are now Sweden, Estonia and Poland. The Scandinavian Battle Axe Culture was found to share a common genetic ancestry with the European Corded Ware Culture.

"This suggests that the introduction of this new cultural manifestation was associated with movements of people,” said Torsten Günther, a population geneticist at Sweden’s Uppsala University, and co-author of the study, in the statement. “These groups have a history which we ultimately can trace back to the Pontic Steppe north of the Black Sea."

Experts from Stockholm University and Sweden's Ostrgotlands Museum also participated in the research. “The collaboration of archaeologists with geneticists allows us to understand more about these people as individuals as well as where their ancestors came from," said the study’s lead author, Helena Malmström, an archaeogeneticist at Uppsala University, in the statement.

Scandinavia continues to reveal new aspects of its rich history. Two Viking boat graves were also recently uncovered in Sweden in what archaeologists are describing as a “sensational” discovery. In another project, an incredible Swedish grave containing the skeleton of a Viking warrior, long thought to be male, was recently confirmed as female. Last year, a Viking “Thor’s hammer” was discovered in Iceland and archaeologists in Norway used ground-penetrating radar technology to reveal an extremely rare Viking longship.

In 2017, an incredibly well-preserved Viking sword was found by a reindeer hunter on a remote mountain in southern Norway. In 2016, archaeologists in Trondheim, Norway, unearthed the church where Viking King Olaf Haraldsson was first enshrined as a saint.