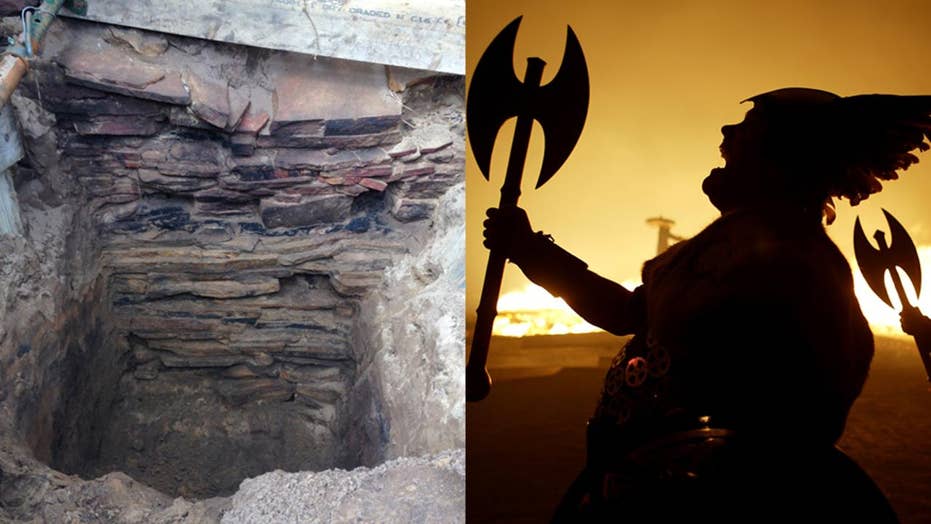 Marauding Vikings may have inadvertently preserved Scotland's largest Pictish fort by setting it on fire. At the site archaeologists found the fort’s wall and beautiful hair and dress pins.

A ‘treasure trove’ of ancient artifacts has been discovered at a fort in Scotland that archaeologists believe was razed to the ground by Vikings.

Archaeologists at the University of Aberdeen made the remarkable finds at Burghead on Scotland’s northern Moray coast. The fort, which was once used by the ancient Pictish people, is described as the largest of its kind in Scotland.

The fort was burned to the ground in the 10th century, likely by advancing Vikings. Experts say that this has preserved items that would have otherwise rotted away hundreds of years ago.

Excavations at the site began in 2015. Last month a dig at the site revealed more of the fort’s secrets.

A bramble headed dress or hair pin (University of Aberdeen)

“When we started digging, we discovered that while the destruction of the fort in the 10th century may not have been good news for the Picts, the fact that so much of it was set alight is a real bonus for archaeologists,” said Dr. Gordon Noble head of archaeology at the University of Aberdeen, in a statement.

In addition to a fortified wall, archaeologists found ornate hair and dress pins, one of which has a detailed bramble design. They also identified so-called “midden layers,” which are essentially ancient garbage dumps and are likely to shed more light on the lives of the ancient fort dwellers.

“We are digging in what is essentially the area that the Picts threw their rubbish but this collection of the waste products of their day-to-day lives is a treasure trove to archaeologists,” said Noble, who led the excavation. “What’s exciting is the level of preservation here. We’ve found animal bone which rarely survives in mainland Scotland because of the acidic soil. We are already getting really nice information about what people ate within the fort and we hope to extract a level of information we’ve not had for Pictish sites before.”

Dubbed “Picti” or “painted people” by the Romans, the Picts were a confederation of tribes in northern Scotland.

Much of the Pictish culture, however, remains shrouded in mystery so archaeologists are thrilled with the Burghead finds. “The Picts were a huge influence on northern Scotland but because they left no written records, archaeology is essential in providing answers in regard to their lives, influence and culture,” said Noble, in the statement.

Coastal erosion means that archaeologists are facing a race against time at Burghead. “The timber wall we found is only one to one and a half meters [5 feet] away from the erosion face,” explained Noble. “We hope to return next year to rescue as much as we can before it falls into the sea.”

File photo - Men dressed as vikings stand in front of a 40 foot-long viking longship as it is burned on Calton Hill in Edinburgh as the launch pad for the city's Hogmanay (New Year) celebrations Dec. 29, 2004. (REUTERS/Jeff J Mitchell)

Other archaeological finds in Scotland have also offered insight into the country’s history. Last year, for example, experts announced the discovery of a rare Roman coin on a remote island in the Orkney archipelago. Archaeologists and volunteers also found the location of a long-lost early medieval kingdom in southern Scotland.

Experts in Scotland have also used 3-D technology to reconstruct the face of an 18th-century ‘witch.’