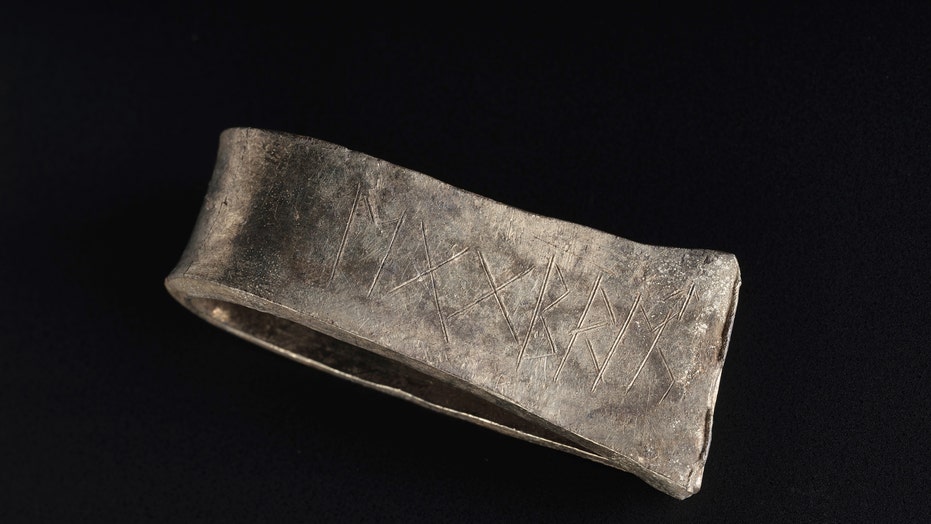 Experts are unlocking the secrets of a mysterious Viking treasure trove that was discovered in Scotland.

The “Galloway Hoard” was found by a man using a metal detector in 2014. It was acquired by National Museums Scotland in 2017, which describes the trove as “the richest collection of rare and unique Viking-age objects ever found in Britain or Ireland.”

The hoard was buried 1,100 years ago and consists of more than 100 gold and silver items.

Runic inscriptions on a number of silver arm rings have now been deciphered by David Parsons of the University of Wales. “Five of the silver arm-rings have runic inscriptions scratched into them which may have functioned as labels identifying distinct portions of the hoard, perhaps recording the names of the people who owned and buried them,” he said in a statement emailed to Fox News. “While several of the texts are abbreviated and uncertain, one is splendidly clear: it reads Ecgbeorht, Egbert, a common and thoroughly Anglo-Saxon man’s name.”

Runic inscriptions on a silver arm-ring from the "Galloway Hoard" have been deciphered. (National Museums Scotland)

The discovery sheds new light on the mysterious treasure trove. “The Galloway ‘Viking’ Hoard may have been deposited by a people who, to judge by name and choice of script, may have considered themselves part of the English-speaking world,” Parsons added. “It is even possible that these were locals.”

Adrian Maldonado, Glenmorangie Research Fellow at National Museums Scotland, also believes that experts may glean more details about the mysterious owner of the “Egbert” arm ring. “Egbert is a common Anglo-Saxon name, and with more research on the rest of the contents of the hoard, we will be able to narrow down its dating and suggest some candidates from the historical record,” he said in the statement.

“If the hoard belonged to a person or group of Anglo-Saxon speakers, does it mean they were out raiding with other Vikings? Or that these Viking hoards were not always the product of Scandinavian raiders?” he added. “There are other explanations, but either way this transforms our thinking on the ‘Viking Age’ in Scotland.”

Treasures from the Galloway Hoard are displayed for media at the National Museums of Scotland on October 26, 2017, in Edinburgh, Scotland - file photo. (Photo by Jeff J Mitchell/Getty Images)

Other Viking discoveries have also been garnering attention recently. Archaeologists recently discovered an ancient Viking drinking hall on a remote island in the Scottish Orkney archipelago.

File photo - Men dressed as vikings stand in front of a 40 foot-long Viking longship as it is burned on Calton Hill in Edinburgh as the launch pad for the city's Hogmanay (New Year) celebrations December 29, 2004. (REUTERS/Jeff J Mitchell)

Two Viking boat graves were also recently uncovered in Sweden in what archaeologists are describing as a “sensational” discovery.