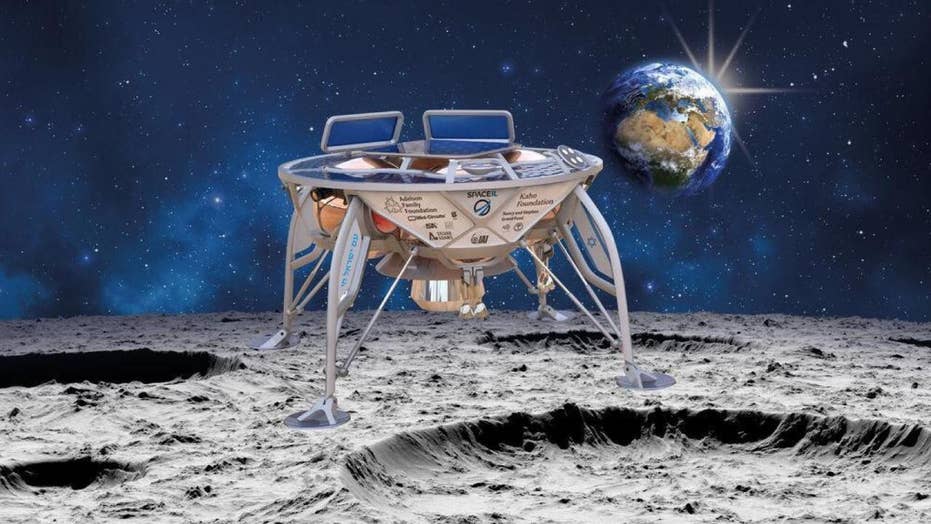 Israel is planning its first mission to the moon. The launch is scheduled for April 11th.

Israel will launch its historic mission to land on the Moon when the unmanned Beresheet spacecraft lifts off from Cape Canaveral Air Force Station atop a SpaceX Falcon 9 rocket Thursday.

Beresheet, which is the Hebrew word for “beginning,” was developed by Israeli nonprofit SpaceIL and state-owned Israel Aerospace Industries. The launch is scheduled for 8:45 p.m. ET and the lander is expected to reach the lunar surface on April 11.

“After more than eight years of working with brilliant engineers, we are finally ready to launch our spacecraft to the Moon!,” said SpaceIL co-founder Yonatan Weintraub, in a statement emailed to Fox News.

About 30 minutes after lifting off from Cape Canaveral’s Launch Complex 40, the spacecraft will disengage from the SpaceX rocket at around 38,300 miles above Earth’s surface, according to SpaceIL. Operating under its own power, Beresheet will then start its epic journey to the Moon.

A rendering of Beresheet conducting its scientific mission to measure the Moon's magnetic field. (SpaceIL)

After reaching the lunar surface, the spacecraft will take Israel into a select group of nations. Only three countries – the U.S., the Soviet Union and China – have made successful ‘soft landings’ on the Moon. An Indian impact probe was intentionally crashed into the lunar surface in 2008. The following year, Japan’s Kaguya spacecraft was directed to crash into the Moon.

Beresheet also will be the first private mission to reach Earth’s natural satellite.

The spacecraft was born out of the Google Lunar XPRIZE competition to land an unmanned probe on the moon. The $30 million competition was scrapped with no winner last year after the organizers said none of the five finalists would make the March 31, 2018 deadline for a Moon launch, Space.com reported.

The Beresheet spacecraft, inside a temperature-controlled shipping container, was loaded into a cargo plane at Israel's Ben Gurion Airport and then flown to Florida. (Photo credit: Eliran Avital)

Nonetheless, the Israeli team pressed on with the development of its 397-pound spacecraft and Thursday’s launch is generating plenty of interest.

“If the #SpaceIL mission is successful this Thursday, Israel will become the fourth country to land an aircraft on the moon. Good luck, Beresheet!,” tweeted Buzz Aldrin Tuesday.

After its two-month journey, the probe will land within Mare Serenitatis in the Moon’s northern hemisphere. SpaceIL notes that the site has magnetic anomalies, enabling Beresheet’s magnetometer device to take measurements as part of a scientific experiment. Data from the magnetometer, which was developed with Israel’s Weizmann Institute of Science, will be shared with NASA.

In addition to its science mission, Beresheet will also take a time capsule to the Moon. Consisting of three disks, the time capsule data includes symbols such as the Israeli flag and the country’s national anthem, “Hatikvah.” Dictionaries in 27 languages are also included on the disks, along with the Bible and a children’s book inspired by the mission. One specially designed disk contains the Lunar Library, which is the brainchild of  the nonprofit Arch Mission Foundation and is described as "a 30-million page archive of civilization."

Beresheet and its time capsule will remain on the lunar surface indefinitely.

The Moon looms large for a number of countries’ space programs. China, for example, recently became the first country to successfully land a probe on the far side of the Moon when the Chang’e 4 lander reached the lunar surface on Jan. 2.

The U.S. also has its sights set on the celestial satellite. President Donald Trump wants U.S. astronauts to return to the Moon as a foundation for future Mars missions and the administration has cited Moon missions as a key element of the 2019 NASA budget. As part of the recent bill to fund the government through the end of fiscal 2019, NASA is getting $21.5 billion, an increase over 2018's budget request.

In a speech last year, Vice President Mike Pence discussed plans for a Lunar Orbital Platform-Gateway, a NASA orbital outpost that will be in the vicinity of the Moon. The chair of the National Space Council described the goal of putting an American on board the Lunar Orbital Platform before the end of 2024. “We’re on the cusp of a new golden age of exploration,” Pence said.

NASA released a draft Request for Proposals last year that called on the U.S. commercial space industry help deliver payloads to the Moon. Unmanned contract missions to the lunar surface are expected to begin as early as 2019, it said. The government space agency has a goal to send a manned mission to Mars in the 2030s.