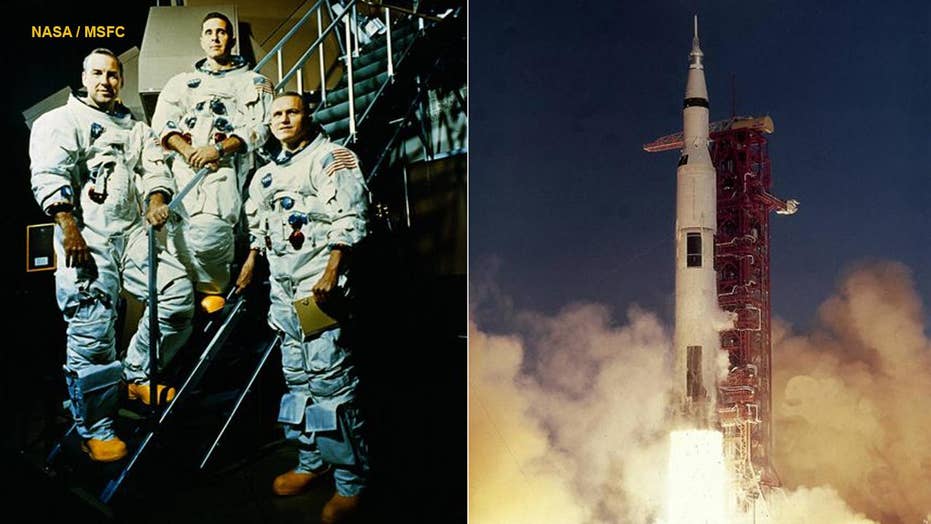 Apollo 8 astronauts Frank Borman and Jim Lovell spoke with Fox News about NASA's first mission to the moon on Dec. 21, 1968.

On the humid morning of Dec. 21, 1968, NASA’s Apollo 8 spacecraft lifted off atop a Saturn V rocket from Launch Complex 39 at Kennedy Space Center on humanity's first journey to another world.

Strapped inside the spacecraft as it rose beyond wispy clouds into the Florida sky, astronauts Frank Borman, Jim Lovell and Bill Anders would soon be first humans to see the far side of the Moon during a series of historic lunar orbits.

On the 50th anniversary of the mission, Borman and Lovell, who are both 90 years of age, recounted their incredible journey to Fox News as if it were yesterday.

Changes to NASA’s mission schedule meant that crewmembers had much less time to prepare for Apollo 8 compared to other launches. “We had a very short four months to get ready – it was like drinking water out of a fire hose,” mission commander Borman explained, noting that this was a stark contrast to the 12 months of launch preparation the astronauts were used to. “We had to do so much, so quickly.”

The second manned spaceflight of the Apollo program, Apollo 8 was a vital stepping stone for the famous Apollo 11 mission that landed Neil Armstrong and Buzz Aldrin on the Moon the following year.

Apollo 8 entered lunar orbit on Christmas Eve, 1968. In total, the spacecraft made 10 lunar orbits, giving the astronauts a remarkable view of the Moon. They were also the first people to travel to a place where the pull of Earth’s gravity was less than that of another celestial body.

Both astronauts recall their wonder at seeing the Moon up close when the Apollo spacecraft was just 60 miles above the lunar surface. “We were like three schoolkids looking through a candy store window,” said Lovell.

Borman told Fox News that, having studied the lunar surface less than Lovell and Anders, he was taken aback by what he saw. “It was very distressed, all the impact craters – I was surprised,” he explained.

The retired U.S. Air Force colonel said that the famous moment when the astronauts saw the Earth rise over the Moon’s surface for the first time will always live with him. Anders captured the incredible scene in a photo known as “Earthrise.”

“The thing that I remember most was seeing the Earth on the lunar horizon – Bill Anders got that photo,” he said.

TO THE MOON AND BACK: APOLLO 11 LUNAR CHECKLIST SOLD AT AUCTION

“Seeing the Earth for the first time over the lunar horizon, I suddenly realized how far away we were,” added Lovell.

On Christmas Eve, the astronauts held a live broadcast from the spacecraft in which they showed images of the distant Earth and took turns reading from the book of Genesis.

Lovell told Fox News that he tried not to focus on the immense danger he and his crewmates were facing. “We were so far away, all sorts of things can happen, but we put it in the back of our minds,” he said.

The astronauts began their journey back from lunar orbit on Christmas Day 1968.

“For me, the period of the greatest anxiety was when we fired the rocket to come back from the Moon – if that hadn’t worked, we’d still be orbiting there,” said Borman. “We burned the engine on the far side of the Moon – it was for 3 minutes, 16 seconds – something like that.”

Lovell's experience on Apollo 8 would prove invaluable when he famously commanded the ill-fated Apollo 13, he added. When Apollo 8 was on its way back from the Moon, the former Navy pilot pushed the wrong button, placing the spacecraft in a pre-liftoff navigational position. “I hit the wrong button during the navigation and ‘put the spacecraft back on the launchpad’,” he quipped. “We got it back on course – that helped us on [Apollo] 13 because we had to turn off the guidance system to save power. So that [experience on Apollo 8] gave me a lot of training.”

The Apollo 8 crew launches on the first manned mission to the Moon. (NASA)

During the roughly 30-minute conversation, Borman told Lovell that his manual navigation of the stricken Apollo 13 spacecraft ranks as the best piloting of the entire Apollo program.

Apollo 8 splashed down in the Pacific Ocean on Dec. 27, 1968, and the astronauts were recovered by the USS Yorktown. Lauded as heroes, the crewmembers were named Time Magazine’s “Men of the Year” for 1968.

Nearly 50 years to the day, both men marvel at how the Apollo 8 spacecraft performed during the six-day mission. “The hardware worked perfectly throughout the entire mission,” said Borman.

“It was a great flight,” Lovell added. “Everything worked out, going around the Moon on Christmas Day.”

The astronaut also notes that Apollo 8 came at the end of a difficult year for the country, marred by the assassinations of Martin Luther King Jr., Robert Kennedy, the bloody Tet offensive in Vietnam and riots at the Democratic National Convention in Chicago. “It was really an uplift, coming after a bad year,” he explained. “There was an uplift, something positive that the American people can look back on and say ‘we did this, this is something that we can be proud of’.”

Although key figures in America’s space history, neither Borman nor Lovell ever made it to the surface of the Moon. “I really didn’t care about walking on the lunar surface, I was there because it was a battle in the Cold War,” said Borman. “Jim was much more of an explorer than I was.”

“I was proud to be part of a very historic mission in Apollo 8,” said Lovell.

To celebrate the 50th anniversary of the astronauts’ journey to space, PBS will air the NOVA documentary “Apollo’s Daring Mission,” on Dec. 26. Launched earlier this year, the book “Rocket Men” also tells the story of America’s first mission to the Moon. “[Apollo 8] was a genuine odyssey,” the book’s author Robert Kurson told Fox News. “It was the first time that we ever left our world.”

MARS 'TERROR,' FUTURE MOON MISSIONS AND AN EPIC JOURNEY TO THE SUN: 2018’S YEAR IN SPACE

Lovell agreed with his friend, noting that, thanks to unmanned vehicles such as NASA’s Mars rovers, we have more information the Red Planet’s surface than Neil Armstrong did about the surface of the Moon.

The astronaut thinks that NASA is wise to again focus its attention on the Moon. “I think that we only scratched the surface of the Moon with Apollo,” he said. “If we go to Mars, we could have a ‘building block’ with the Moon."