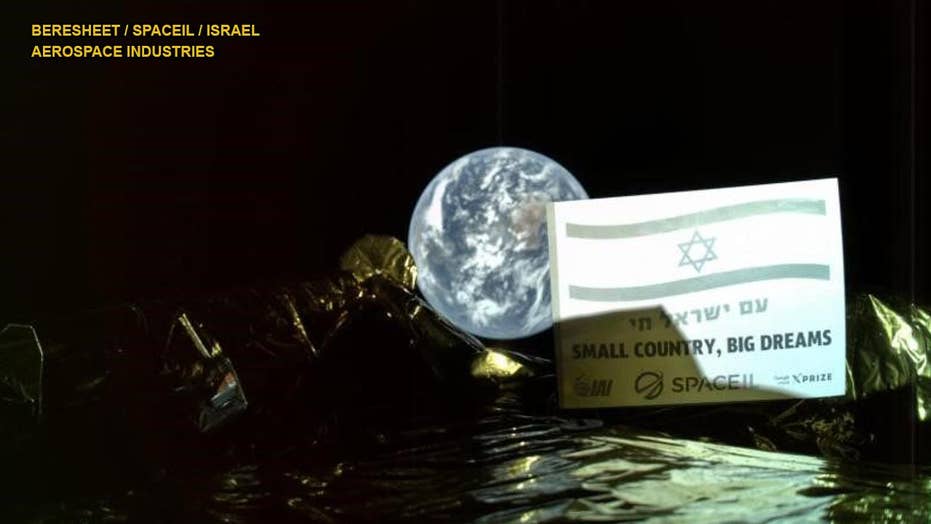 Israeli spacecraft snaps stunning selfie on its way to the Moon

The unmanned Israeli spacecraft, Beresheet, captured a stunning selfie when the spacecraft was 23,364 miles from Earth. The spacecraft was developed by the Israeli nonprofit SpaceIL and the state-owned Israel Aerospace Industries. Beresheet was launched from Cape Canaveral Air Force Station atop a SpaceX Falcon 9 rocket on February 21, and is expected to reach the lunar surface on April 11.

The landing will be the first private mission to reach the Moon. Beresheet, which is the Hebrew word for “in the beginning,” was jointly developed by the Israeli nonprofit SpaceIL and the state-owned Israel Aerospace Industries.

ISRAELI SPACECRAFT SNAPS STUNNING SELFIE ON ITS WAY TO THE MOON

The unmanned spacecraft will also allow Israel to join a select group of nations. Only three countries – the U.S., the Soviet Union and China – have made successful ‘soft landings’ on the lunar surface.

A picture of the far side of the moon with Earth in the background. (Eliran Avital)

“After years of planning and preparations, Israel is finally set to land on the moon,” said SpaceIL and Israel Aerospace Industries in a statement Thursday. After a successful maneuver to lower the spacecraft’s altitude on Wednesday, the organizations are making the final preparations to land the probe on the lunar surface. “SpaceIL and IAI have been working all night on last calculations,” they explained in the statement.

The landing process is expected to start at 3:05 p.m. ET, with Beresheet expected to touch down on the Moon at 3:25 p.m. ET.

The spacecraft entered lunar orbit last week, when it captured its first images of the dark side of the Moon.

Beresheet was launched from Cape Canaveral Air Force Station atop a SpaceX Falcon 9 rocket on Feb. 21.

Beresheet was born out of the Google Lunar XPRIZE competition to land an unmanned probe on the Moon. The $30 million competition was scrapped with no winner after the organizers said none of the five finalists would make the March 31, 2018 deadline for a Moon launch, Space.com reports. Nonetheless, the Israeli team pressed on with the development of its 397-pound spacecraft.

Beresheet captured the selfie when the spacecraft was 23,364 miles from Earth. (Beresheet/SpaceIL/Israel Aerospace Industries)

The probe will land within Mare Serenitatis, in the Moon’s northern hemisphere. SpaceIL notes that the site has magnetic anomalies, enabling Beresheet’s magnetometer device to take measurements as part of a scientific experiment. Data from the magnetometer, which was developed with Israel’s Weizmann Institute of Science, will be shared with NASA.

In addition to its science mission, Beresheet is taking a time capsule to the Moon. Consisting of three disks, the time capsule data includes symbols such as the Israeli flag and the country’s national anthem, “Hatikvah.” Dictionaries in 27 languages are also on the disks, along with the Bible and a children’s book inspired by the mission.

Beresheet and its time capsule will remain on the lunar surface indefinitely.

A picture taken by Beresheet - the far side of the moon during a maneuver at a height of 292 miles from the moon. (Eliran Avital)

China became the first country to successfully land a probe on the far side of the Moon when the Chang’e 4 lander reached the lunar surface on Jan. 2.