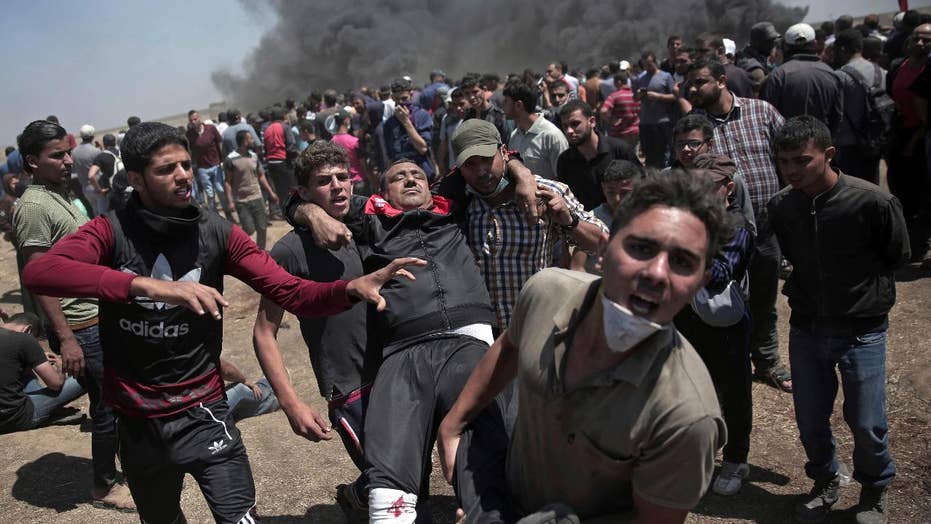 Former Israeli Ambassador to the U.S. Danny Ayalon on Palestinians protesting President Trump's decision to move the U.S. embassy in Israel to Jerusalem and the fallout from President Trump pulling out of the Iran nuclear deal.

The White House said Monday that terrorist group Hamas “bears responsibility” for the clashes at the Israel-Gaza border that left more than 50 Palestinians dead and at least 2,000 injured, amid the opening of the U.S. Embassy in Jerusalem.

The Trump administration unveiled the new embassy Monday, following a decision by President Trump last year to move the outpost from Tel Aviv to Jerusalem and recognize the holy city as the capital of Israel. The move was cheered by Israelis, but spurred mass protests from Palestinians that turned deadly when Israeli security forces opened fire.

White House Deputy Press Secretary Raj Shah said Monday, though, that Hamas, which runs the Gaza Strip, is responsible for the protests and called it a “gruesome propaganda attempt.”

US OPENS EMBASSY IN JERUSALEM, RECOGNIZING CITY AS 'TRUE CAPITAL' OF ISRAEL

“The responsibility for these tragic deaths rest squarely with Hamas…. Hamas is intentionally and cynically provoking, and as the secretary of state said, Israel has a right to defend itself,” Shah told reporters at the White House press briefing Monday. “We believe Hamas as an organization has engaged in cynical operations.”

At least 52 Palestinians were killed in the lead-up to the embassy’s opening on Monday, marking the deadliest day since the Hamas-led border protests began in March. More than 35,000 protesters amassed at a dozen locations along the security fence at the Gaza border. The death toll reached the highest since a 2014 cross-border standoff between the militant group and Israel.

Israel bolstered its border security as thousands of Gaza residents amassed at the Israeli border. Since weekly border marches began in late March, dozens of Palestinian protests have been killed and more than 2,000 wounded by Israeli army fire.

Hamas leaders have suggested a possible border breach in the days leading up to the embassy celebration, while Israel has warned it would prevent protesters from breaking the border at any cost.

When questioned whether Israeli military defense, killing dozens of Palestinians, would threaten peace agreements, Shah underscored the administration's belief that the clashes were spurred by Hamas.

Palestinian officials have criticized the Trump administration for its decision to move the U.S. Embassy to Jerusalem. Palestinian President Mahmoud Abbas cut ties with the U.S., declaring it unfit to be the sole mediator for potential peace between Israel and Palestine.

The Trump administration had brushed off Palestinian criticism, saying that the embassy could be a first step for brokering a peace agreement.