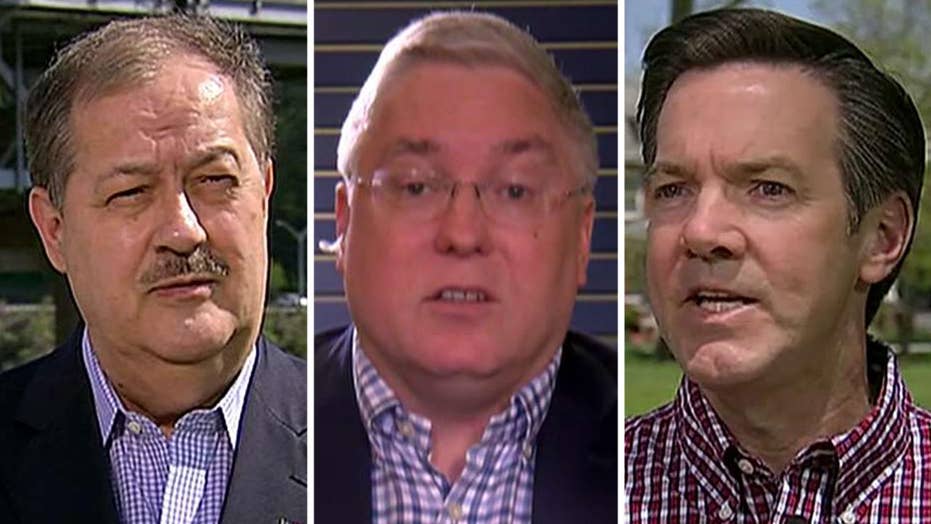 Down to the wire in high-stakes West Virginia primary

Republican Senate candidate, Don Blankenship, is ratcheting up his attacks against McConnell. Peter Doocy has the latest on the race.

MORGANTOWN, W.Va. – Sen. Mitch McConnell, R-Ky. is the leader of the Senate. But one Republican primary candidate is talking about the longtime Kentucky lawmaker like he’s the leader of a drug cartel.

“One of my goals as U.S. Senator will be to ditch cocaine Mitch,” candidate Don Blankenship declared at the end of a new campaign ad.

The origins of “cocaine Mitch,” according to the campaign, are rooted in accusations of drug smuggling on Chinese ships associated with the family of McConnell’s wife, Transportation Secretary Elaine Chao.

The narcotic-themed nickname enters the dialogue on the eve of a nationally televised debate at 6:30 p.m. Tuesday on Fox News Channel. Blankenship will be joined on stage in Morgantown by Rep. Evan Jenkins, R-W.Va. and West Virginia Attorney General Patrick Morrisey.

Considered a toss-up in the midterm elections, the West Virginia Senate race is one where Republicans hope to have the chance to unseat incumbent Joe Manchin, a Democrat who first won the seat in a 2010 special election.

According to a Fox News poll, three Republicans are considered to be “top tier” candidates ahead of the May 8 primary: Blankenship, Evan Jenkins and Patrick Morrisey. Jenkins, a U.S. congressman, topped the list of Republican contenders.

But the race is getting national attention because a group with ties to GOP leadership, the Mountain Families PAC, has spent at least $1.3 million to try to derail Blankenship’s candidacy.

Operatives fear the year in prison the former coal baron recently served on a conspiracy to violate mine safety standards, tied to the 2010 Upper Big Branch mine disaster that killed 29, may jeopardize an opportunity to unseat Manchin.

Blankenship shrugs off the impact of the intra-party effort to keep him off the November ballot.

“I think it probably moves me up a little bit,” Blankenship said of the ads blanketing TV and radio broadcasts, calling him “convicted criminal Don Blankenship.”

“I don’t think Mitch McConnell realizes,” he said, “how anti-him and how anti-the establishment West Virginians are.”

"The establishment, no matter who you define it as, has not been creating jobs in West Virginia," Blankenship said at a primary debate this past week.

Jenkins, who leads the field of Republicans, has been a congressman for three years and served as a state senator in West Virginia for 12 years.

Morrisey is the first Republican to serve as attorney general in the state since 1933, according to his campaign website.

Manchin is not running unopposed; he races a primary challenger in Paula Jean Swearengin, an environmental activist whose platform is more in line with Sen. Bernie Sanders, the progressive independent from Vermont.

President Trump beat Democrat Hillary Clinton by more than 40 points in the Mountain State in the 2016 presidential election.

The state has long been considered a prime pickup opportunity for Republicans, who hold a two-seat Senate majority that suddenly feels less secure given signs of Democratic momentum in Nevada, Arizona, Tennessee and elsewhere. If Democrats can win West Virginia, which gave Trump his largest margin of victory in the nation, they may have a slim chance at seizing the Senate majority.

Fox News reporter Kaitlyn Schallhorn and The Associated Press contributed to this report.