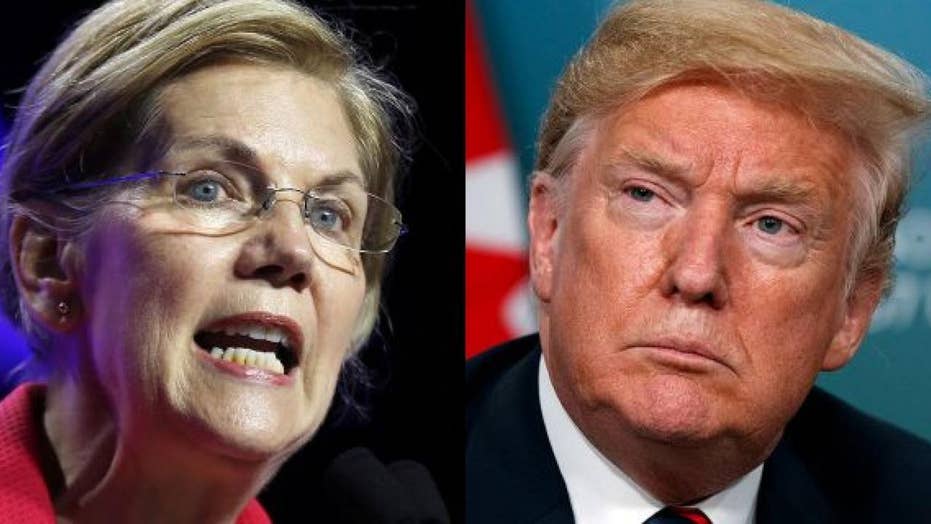 The results, as shared with The Boston Globe, reportedly reveal “strong evidence” the Massachusetts senator had a Native American ancestor dating back six to 10 generations. At the same time, the report could embolden critics by showing only trace amounts of that heritage -- which Republicans have charged she used to advance her career at Harvard.

"To put that in perspective, Warren might even be less Native American than the average European American," Republican National Committee Deputy Communications Director Mike Reed said in an email, while saying this would "not give you the right to claim minority status."

But as Warren mulls a presidential run in 2020, her Senate re-election campaign produced a video playing up the results.

In it, Warren says: “The president likes to call my mom a liar. What do the facts say?”

Stanford University Professor Carlos D. Bustamante replies: “The facts suggest that you absolutely have Native American ancestry in your pedigree.”

Bustamante, according to the Globe, authored the six-page report and conducted the analysis after Warren released a sample of her DNA to a private lab in Georgia over the summer. Warren did not use a commercial service for her DNA analysis, according to The Globe, but rather Bustamante, who is on the scientific advisory board for Ancestry. He also worked on projects for other commercial services like 23andMe.

Bustamante found that “the vast majority” of Warren’s family tree is European, but added that “the results strongly support the existence of an unadmixed Native American ancestor ... in the range of 6-10 generations ago.”

Warren has been repeatedly criticized by Trump over her heritage claims—including last week at a rally, when he once again used his “Pocahontas” nickname for her.

“I’ve got more Indian blood in me than Pocahontas, and I have none,” Trump said. “Hey, I have high cheekbones too, maybe I’m Indian.”

Over the summer, Trump said that if Warren did mount a presidential run in 2020 and the two faced off in a general election debate, he would offer $1 million to her favorite charity on the spot if she took a DNA test to prove her Native American heritage.

The DNA results report could, at least, eliminate that as a line of attack.

Trump, though, brushed off Warren's DNA test when asked about it Monday morning, while claiming he never made the million-dollar offer (he did, at a rally over the summer).

"Who cares?" Trump said. "I didn't say that. You better read it again."

Trump added that he "hopes" Warren runs for president.

"I think she'd be very easy. I do not think she'd be difficult at all. She'll destroy the country. She'll make our country into Venezuela," Trump told reporters on the White House lawn. "It's going to be a long process for the Democrats."

"By the way, @realDonaldTrump: Remember saying on 7/5 that you’d give $1M to a charity of my choice if my DNA showed Native American ancestry? I remember – and here's the verdict. Please send the check to the National Indigenous Women’s Resource Center," Warren tweeted, including a link to the group's website.

Warren’s move to release her DNA results is yet another indication that she is considering a run for president. Warren has already released 10 years of tax returns and made her personnel files available to the Globe.

Warren is up for re-election in November against Republican candidate Geoff Diehl. The latest polls show Warren with a solid lead.