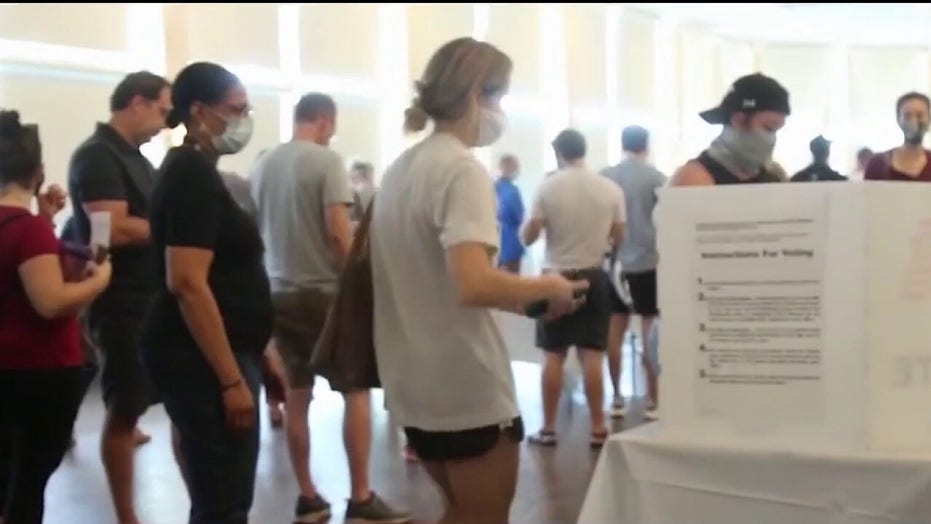 A messy primary in Georgia has many people concerned about the prospect of major problems in November; Peter Doocy reports.

Hours-long lines at the polls, voting machine malfunctions, delayed absentee ballots, a shortage of provisional ballots, held-up results, and partisan sniping over which party was to blame – some of the major problems that plagued Tuesday’s primary in Georgia.

Across the country, results from Nevada’s primary were delayed until the middle of the night after voters waited in long lines even after the polls closed.

With deep health concerns over in-person voting during the coronavirus pandemic, both states witnessed a surge in absentee balloting, adding an extra burden on election officials to accurately and as quickly as possible count the dramatic rise in ballots being received through the mail.

Georgia and Nevada aren’t isolated cases. Primaries in Wisconsin, Pennsylvania, Maryland, and the District of Columbia were also plagued with similar problems.

With states strapped for cash and the massive movement toward voting by mail – both results of the pandemic shuttering much of the nation – some experts see the primary problems as a warning sign for things to come in November’s general election, when the presidency, control of Congress and some governorships and more are up for grabs.

Any sign of widespread election night problems would be sure to fuel criticism by both parties, and could be used to challenge the outcome.

“I think it’s a big red flashing siren that states and Congress need to take the November election really seriously if they’re going to prevent what happened in Georgia and Nevada and elsewhere from happening,” elections expert Michael Li told Fox News.

Li, senior counsel at the nonpartisan Brennan Center for Justice's Democracy Program, emphasized “it’s clear that states are not ready for this election.”

In a statement released by Issue One – an election reform advocacy group – the two former lawmakers warned that “this type of election chaos sows doubt in the outcomes of our elections and fosters the belief that our system is corrupt. Our country could be headed towards an illegitimate election if states cannot hold safe and secure elections where every eligible voter can participate.”

In Georgia, the problems mainly occurred in Democratic stronghold majority-minority counties. Republican state officials blamed local Democratic administrators for the mess, with Democrats pointing fingers back at the Republicans.

With the once solidly red state turning into a potential battleground this autumn, both presidential campaigns weighed in. Presumptive Democratic nominee Joe Biden’s campaign called the chaos in Georgia “completely unacceptable.” The former vice president’s campaign vowed to be “fully engaged” in the fight to ensure Georgians can safely vote in November.

President Trump’s campaign pointed to the surge in absentee balloting – which was urged by Georgia’s Republican secretary of state in order to try and limit long lines at the polls – as the culprit.

The president for months has railed against the moves by states controlled by Democrats and some Republicans to expand voting by mail amid the coronavirus outbreak.

But the president has not followed up his repeated claims that voting by mail leads to massive voter fraud and favors Democrats over Republicans with proof.

The spotlighting of voter fraud by the president has Democrats warning of ulterior motives.

"It’s my greatest concern, my single greatest concern," Biden said Wednesday night in an appearance on "The Daily Show." "This president is going to try to steal this election. This is a guy who said that all mail-in ballots are fraudulent, voting by mail, while he sits behind the desk in the Oval Office and writes his mail-in ballot to vote in a primary."

Elections experts do say that voting by mail is more susceptible to fraud than casting a ballot in person, but they’ve seen no evidence of widespread fraud or that absentee balloting favors Democrats. But the massive increase in absentee balloting places an extra burden on an already stressed-out state and county election officials and on a U.S. Postal Service facing financial and manpower deficits.

As the coronavirus was sweeping the nation in March, the Brennan Center proposed sweeping changes to current voting practices across the country – such as universal mail-in voting, ballot drive-by drop off boxes from coast to coast, and easier online voter registration – to make voting in November safe.

But their plan isn’t cheap – with a price tag at roughly $2 billion.

To date, Congress has passed and the president has signed into law $400 million in federal funds to help the states improve their election systems.