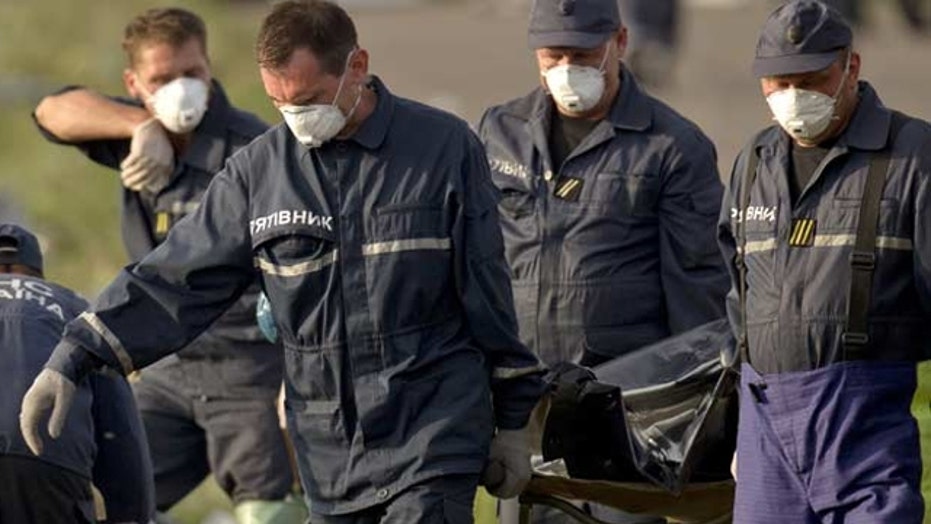 Senior intelligence officials said Tuesday Russia created the “conditions" that led to the downing  of a Malaysia Airlines passenger jet over eastern Ukraine but stopped short of directly linking Moscow to the fatal missile strike.

The officials said-that anti Ukraine government forces, which are backed by Russia, likely fired the missile that took down Flight MH-17 last Thursday, killing all 298 aboard.

However, they made no direct link to Russia.

The assessment follows a series of State Department comments and releases over the weekend that made a strong connection among the strike, Russia and the pro-Russian separatists, who are believed to have fired a SA-11 surface-to-air missile.

Officials said the assessment that an SA-11 was used is based in part on footage of the crash-site evidence.

They briefed reporters Tuesday under ground rules that their names not be used in discussing the intelligence.

The officials said the plane was likely shot down by the separatists who are in eastern Ukraine, based on intercepted communications, satellite photos and social media postings, some of which have been authenticated by U.S. experts.

But the officials said they did not know who fired the missile or whether any Russian operatives were present at the launch.

Since then, the separatists have battled with central government forces in eastern Ukraine.

A senior intelligence official confirmed Tuesday that the separatists are being training in air defense systems at a Russian training facility in Rostov, near the Ukraine border.

However, the official made clear investigators do not know whether those who fired the missile came from Rostov.

In terms of who fired the missile, "we don't know a name, we don't know a rank and we're not even 100 percent sure of a nationality," one official said, adding at another point, "There is not going to be a Perry Mason moment here."

The officials also said Russia has continued to help the rebels after the downing, providing additional tanks and rocket launchers.

Officials also described a stepped-up campaign by Russia in recent weeks to arm and train the rebels, which they say has continued even after the shooting down of the commercial jetliner.

The officials made clear they were relying only in part on social media postings and videos made public in recent days by the Ukrainian government.

They said they also had technical and overhead data to support their assessment, which they said could change over time based on new information.

One senior intelligence official also said that investigators are confident that the Ukrainian air defense system was not within range of the jetliner, adding that Russian explanations for the downing of the aircraft are not plausible.

On Sunday, the U.S. Embassy in Kiev released a document detailing purported eyewitness and other evidence also indicating the airliner was likely brought down by a SA-11 surface-to-air missile fired by the separatists.

Embassy officials said they based their analysis on several factors including the increasing flow in recent months of heavy weapons from across the Russian border to the separatist fighters.

They also said they had information indicating the separatists are being trained at the facility in southwest Russia.

Embassy officials also said a missile launch was detected from the separatist-controlled region at the same time contact was made with the flight.

Fox News’ Catherine Herridge and The Associated Press contributed to this story.