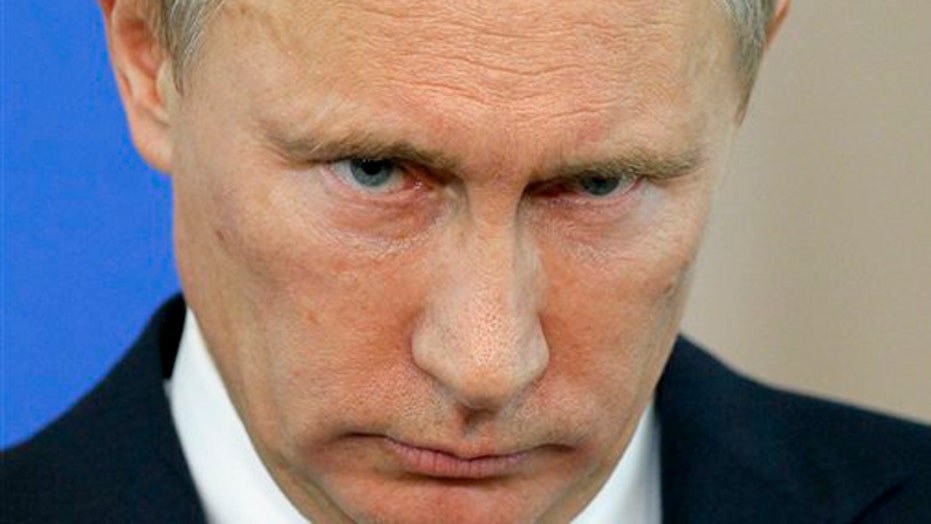 Russian media report that Putin is offering to mediate a truce between Israel and Hamas. Critics say, don't you believe it

Fresh evidence that Russia is directly shelling Ukrainian military targets is stoking concerns that Vladimir Putin feels increasingly comfortable running roughshod over his neighbors in defiance of the U.S. and Europe, putting pressure on the Obama administration to draw a red line that even Moscow can see.

The Obama administration has taken a decidedly tougher tone than Europe against Putin since the start of the Ukraine crisis, but a failure to act in concert has left the Russian leader testing his limits -- to alarming results.

The latest development, confirmed by Pentagon and State Department officials, is Russia firing artillery from its own territory into Ukraine. The Ukrainian government and media have made these allegations against Moscow for days now, but the Obama administration on Thursday backed up that intelligence publicly for the first time.

"We have new evidence that the Russians intend to deliver heavier and more powerful multiple rocket launchers to separatist forces in Ukraine and have evidence that Russia is firing artillery from within Russian to attack Ukrainian military positions," State Department spokeswoman Marie Harf told reporters.

The Pentagon also said Friday they have intelligence showing the Russians are moving high-caliber multi-rocket launching systems toward the border, and delivery is "imminent." A Pentagon spokesman said these actions fly "in the face of everything the Russians have said up until now about their desire to help contribute to de-escalation."

The moves are the latest indication of Putin flexing his military muscle, while watching the rest of the world deliberate. He has thus far successfully backed and preserved Bashar Assad in Syria, despite the Syrian leader defying Obama's "red line" on the use of chemical weapons. His annexation of the Crimean Peninsula did not mark the end of Russia's involvement in Ukraine, but rather the beginning of a sustained support for pro-Russian separatists in the eastern part of the country.

The tragic downing last week of a Malaysian Airlines passenger jet, killing nearly 300, represented a potential turning point. But despite U.S. allegations that the plane was almost certainly downed by Russian-backed separatists, Putin has stayed the course.

"I think he's getting stronger domestically with every successive crisis," Simon Shuster, who wrote a new Time cover story on the subject titled "Cold War II," told Fox News. Shuster, in his Time article, notes that Obama announced "no deadlines, drew no red lines and made no threats" after the airliner crash, and "Putin presses ahead."

According to the Kremlin, Putin is even offering to help broker talks between the Israelis and Palestinians amid the bloody war in the Gaza Strip.

John Bolton, former U.S. ambassador to the United Nations, told Fox News this is a sign that Putin feels emboldened.

"It is a reflection that Vladimir Putin feels that his position internationally is very strong," Bolton said.

Sen. Bob Corker, R-Tenn., top Republican on the Senate Foreign Relations Committee, said it's now time for the U.S. to take "decisive action with or without Europe" to boost sanctions against the Russian economy.

"Unless the West imposes greater costs on Putin, Russia will continue its destructive acts in the region," he said in a statement on Thursday.

Sen. Dan Coats, R-Ind., wrote in an op-ed on FoxNews.com that Obama and German Chancellor Angela Merkel could take several steps to pressure Putin. Among them, he said they should demand an "immediate stand down in Ukraine." Coats wrote that if Putin does not end his support for separatists, "we must bring Russia's economy to its knees."

He urged sanctions on the country's energy sector and state-backed arms exporter.

The Obama administration, which previously has imposed unilateral sanctions on Russia, says it's now looking at "a range of options," without getting into specifics.

"We are continuing to look at additional sanctions and to impose additional costs on Russia. That process is ongoing," Harf said.

White House spokesman Eric Schultz said earlier this week that the U.S. is "assessing all the sort of tools in our arsenal as we move forward."

"Despite some of those commercial concerns, we've seen Europe move with us. Not always as fast as we'd like, but they get there," he said. "And sadly, tragically the shooting down of this Malaysian Airlines airliner and the recognition that it is likely it was shot down and it is also likely that it was conducted by non-state actors that were provided incredibly powerful weapons by the Russian government, all that I think may stiffen the spine of our European partners moving forward."

Gen. Martin Dempsey, chairman of the Joint Chiefs of Staff, echoed that view during a talk at the Aspen Security Forum.

"You've got a Russian government that has made the conscious decision to use its military force inside of another sovereign nation to achieve its objectives -- first time, I think, probably, since 1939 or so that that's been the case," he said, according to an account in the American Forces Press Service.

Dempsey said the U.S. is examining its own "readiness models" in response while also looking at ways to support Ukraine.

Former CIA director Gen. Michael Hayden told Fox News' "The Kelly File" that in light of recent developments, "it's not just about Ukraine now, it's about what Europe is going to look like for the next era."