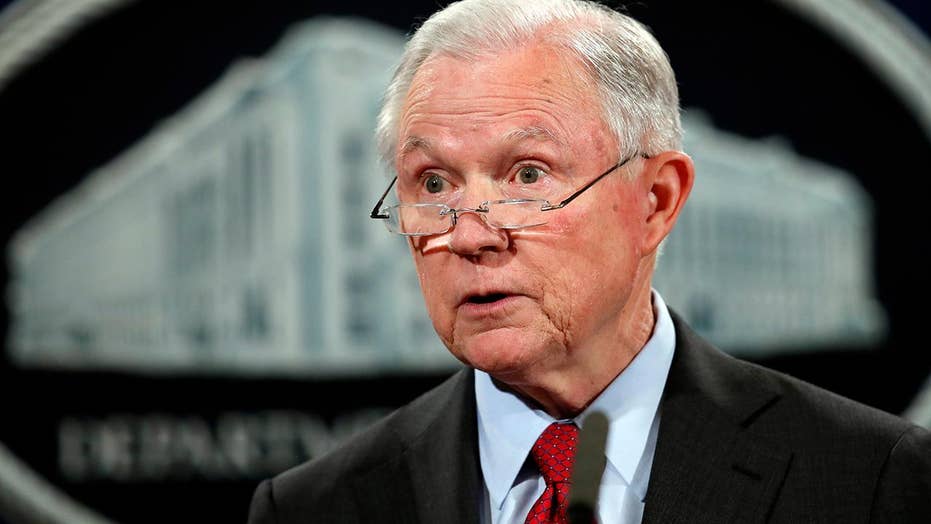 Two Republican lawmakers called on Attorney General Jeff Sessions to resign Thursday, saying "he has no control at all of the premier law enforcement agency in the world."

Reps. Mark Meadows of North Carolina and Jim Jordan of Ohio aired their grievances in an opinion piece published on the Washington Examiner's website. The headline said: "It's time for Jeff Sessions to go."

Meadows and Jordan criticized anonymous leaks to The New York Times, which published a story Dec. 30 reporting that the FBI started its investigation as a result of a tip from an Australian diplomat who had spoken to Trump campaign adviser George Papadopoulos. The Times reported that Papadopoulos told the diplomat that Russia had thousands of emails that would embarrass Democratic candidate Hillary Clinton. Emails stolen from Democratic officials were later released by WikiLeaks.

Meadows and Jordan described the Times report as "far-fetched" and "ill-supported." They also accused "FBI agents and DOJ officials" of leaking information to the Times "in clear violation of the investigative standards that Americans expect and should demand.

"How would New York Times reporters know any of this information when the FBI and DOJ are prohibited from talking about ongoing investigations?" they wrote. "How many FBI agents and DOJ officials have illegally discussed aspects of an ongoing investigation with reporters? When will it stop?"

Meadows and Jordan have frequently gone after the department and FBI in recent weeks as some Republicans have focused on what they contend is perceived bias at the department. Democrats have accused Republicans of trying to divert attention from the Russia investigations.

"It is time for Sessions to start managing in a spirit of transparency to bring all of this improper behavior to light and stop further violations," the lawmakers said. "If Sessions can't address this issue immediately, then we have one final question needing an answer: When is it time for a new attorney general? Sadly, it seems the answer is now."

It's unclear whether any other Republican lawmakers feel the same way about Sessions. Some GOP concerns about the Justice Department were allayed Wednesday when Deputy Attorney General Rod Rosenstein agreed to provide documents and witnesses for the House intelligence committee's Russia probe.

Most Republicans in Congress have continued to be supportive of Sessions, a former Alabama senator who shares many of their views on topics such as immigration and law enforcement.

The office of House Speaker Paul Ryan, R-Wis., referred to comments Ryan made last year: "The speaker has said the president gets to decide who serves in the executive branch and his comments stand," spokeswoman AshLee Strong said.

Democrats who have long opposed Sessions are now urging that he stay, indicating concerns that a new attorney general could tamper with Mueller's probe.

"I voted against Jeff Sessions and said he never should be there in the first place given his record on civil rights, on immigration, on so many other issues," Senate Democratic Leader Chuck Schumer, D-N.Y., said on Thursday. "My view now is very simple: Nothing, nothing, nothing, should ever interfere with the Mueller investigation. He must be allowed to pursue that to wherever it leads."