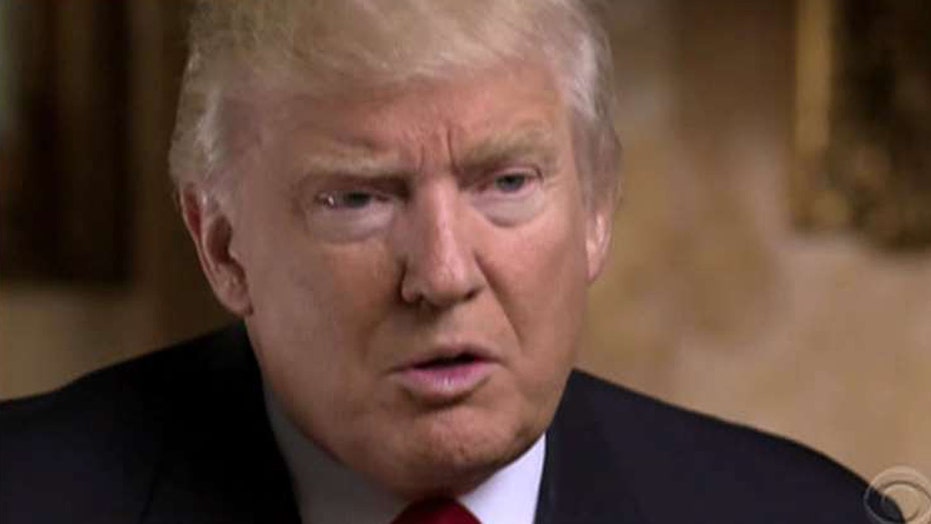 President-elect Trump promises to 'bring our country back'

President-elect Donald Trump vowed to rebuild the country’s infrastructure on the campaign trail -- but a closer look at his $1 trillion proposal to give the nation’s highways, bridges and railways a makeover shows the freshman politician faces a rough road of his own with members of the GOP.

During his victory speech, Trump pledged he’d “rebuild our infrastructure, which will become, by the way, second to none.” He added, “We will put millions of our people to work as we rebuild it.”

When President Obama tried to deliver on a similar promise, Republican lawmakers fought him at every turn, making their deep-seated dislike for government spending known.

If the fiscal fights of the past are any indication of what’s to come, Trump could have a tough time. Take the budget, for example.

Trump’s agenda seems to run counter to years of promises made by congressional Republicans to balance the federal budget.

Trump's tax cut, estimated to cost almost $5 trillion over 10 years, will likely be pared back.

"We know we're going to have to pay for this," said Sen. John Cornyn of Texas, the No. 2 Senate Republican. "The question is whether we do it now or whether we send it to our kids and grandkids and make them pay for it. So that's an important point that we need to achieve some consensus on."

On the spending side of the ledger, Trump's promises of a huge infrastructure plan are already running into difficulty with Republicans.

The flip side involves longstanding promises by Capitol Hill Republicans to balance the budget by repealing the Affordable Care Act, sharply cutting social programs like Medicare, Medicaid, food stamps and student loan subsidies. Trump promises to replace the so-called "Obamacare" and assured voters during the campaign that he wouldn't cut Social Security and Medicare -- and he's on record as saying that 2012 GOP nominee Mitt Romney's choice of now-Speaker Paul Ryan, R-Wis., "was the end of the campaign."

"I said, `You've got to be kidding' -- because he represented cutting entitlements, etc., etc. The only one that's not going to cut is me," Trump said at a February campaign stop.

Major reforms require presidential leadership -- and as a candidate Trump didn't show much interest in attacking the deficit.

"It's clear that deficits and spending retrenchment and entitlement reform was not what this election was about," said Neil Bradley, a former top House GOP aide who is skeptical of the party's ability to deliver major spending cuts.

The deficit, said Sen. Roy Blunt, R-Mo., "wasn't talked about in the campaign."

The math is also daunting. The most recent House GOP budget plan, for instance, promised to balance the budget over a decade by cutting spending by $6.5 trillion -- roughly 13 cents of every dollar spent -- over the next 10 years. But their budget plans have kept Social Security, the Pentagon, veterans programs and interest payments immune from cuts, so they've doubled down on cuts to the Medicaid health program for the poor and disabled, along with cuts to domestic programs like education, farm subsidies, housing vouchers and scientific research.

Recently, however, the focus in Washington has been to reverse cuts to the Pentagon and domestic agencies imposed by a 2011 budget deal. Along the way, Obama and top Republicans sought modest cuts to the federal crop insurance program and the generous military pensions paid to veterans in their 40s and 50s -- only to have to reverse course after bipartisan squealing from rank-and-file lawmakers.

Given the inability to preserve such tiny spending cuts in recent years, one couldn't be faulted for doubting whether lawmakers could stomach the far, far larger cuts demanded by Ryan's balanced budget plans.

One option for both spending and taxes is to enact a one-time tax break on overseas profits that multinational corporations "repatriate" back to the United States. That could produce $100 billion or so over 10 years by some estimates and the windfall is being eyed for both an infrastructure package and a tax reform bill.

"I think the American people will support spending when they get something concrete and tangible for our efforts," said Sen. Roger Wicker, R-Miss. "There is a feeling that there's enough money there to pay for a big infrastructure program to get the economy going again and pay for stuff and also use part of the repatriation as a way to finance tax reform."