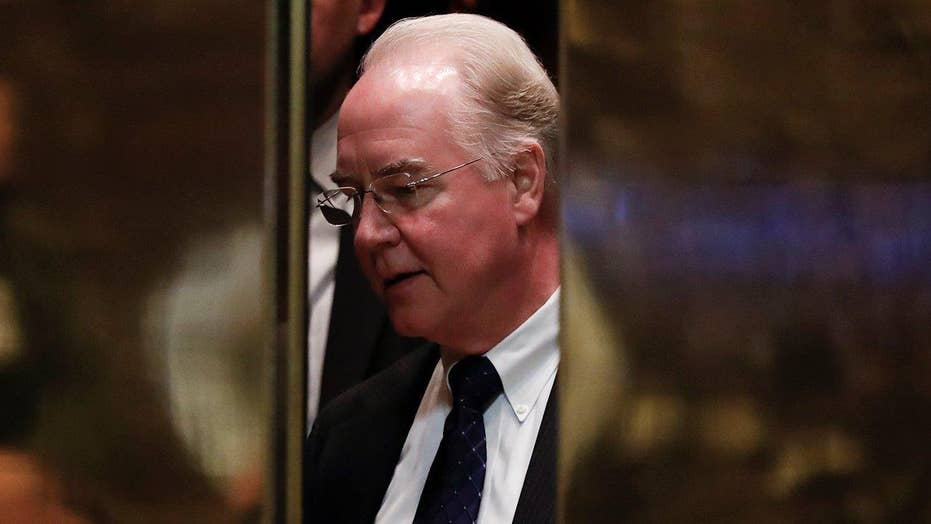 Trump on Price HHS pick: He is exceptionally qualified

President-elect Donald Trump’s announcement Monday that he'll nominate longtime ObamaCare nemesis Rep. Tom Price to lead the Department of Health and Human Services is perhaps the clearest and most concrete sign yet from the incoming president that he is serious about dismantling President Obama’s signature health care law.

Price, R-Ga., a former orthopedic surgeon, has been one of a number of physicians who has worked to form a Republican Party alternative to the Affordable Care Act amid claims by Democrats that the GOP has no realistic plan to replace the law.

Trump has made the repeal-and-replace of ObamaCare a signature issue of the campaign, although he has rarely gone into specifics. Through the primaries and campaign, he said that he would remove restrictions that prevent insurance companies from competing across state lines, a move he claims will lead to greater competition and therefore lower premiums.

Since his election, Trump has appeared to shift somewhat on the issue, saying there are elements of the Affordable Care Act he may keep – including provisions preventing insurance companies from denying coverage based on pre-existing conditions, and allowing children to stay on their parents’ health care plans until the age of 26.

“As a legislator, he has played a leading role in developing conservative health care solutions that put patients first. We could not ask for a better partner to work with Congress to fix our nation's health care challenges,” Ryan said.

The reason for the excitement among conservatives at the Price pick is that he has a proven record of being committed to replacing ObamaCare, and has even spearheaded what some experts call the Republican’s best idea to replace it in 2017.

“He’s a fabulous choice, a visionary leader who gets down in the details and really does the hard work,” Grace-Marie Turner, president of the Galen Institute, told FoxNews.com. “He’s an incredible spokesman for free market ideas.”

“There’s no question, this guy is a serious guy,” Robert Moffit, a senior fellow at the Heritage Foundation and a former senior official at HHS during the Reagan administration, told FoxNews.com.

Price’s plan, the Empowering Patients First Act -- which he has introduced regularly since 2009 -- offers free-market solutions that include providing tax relief for individually-bought health insurance, and would offer customers the ability to own and control their health care policies, taking it with them from job to job. It would also allow those in government programs Medicare and Medicaid to opt out and receive tax credits with which to buy a private plan instead.

Price’s fundamental principle is to mix transparency with competition in order to give customers greater choice, and subsequently bring down premiums.

Experts say that Price’s experience not only as a physician, but in Congress, where many of the features of his plan were included in the House Republican’s official plan to replace ObamaCare, will make him a a secretary who can get things done.

“For sheer compatibility, collegiality and competence in terms of grasping the nuances of what has to be done in health policy, I can’t think of a better candidate,” Moffit said. “He’s best understood by his legislative record, he is author of a lot of amendments and bills, but especially the Empowering Patients First Act, because it’s a highly detailed legislative proposal.”

Turner said that because he has been so deep in policy, he will not merely be a foot soldier for the White House, but will know the powers and options available to him to act right away.

“When they wrote the Affordable Care Act, they gave the HHS secretary 2000 powers about how the law was to be implemented, so the secretary now has enormous power,” Turner said. “He understands the law and the powers the law gives him to protect people right away from things such as the individual mandate.”