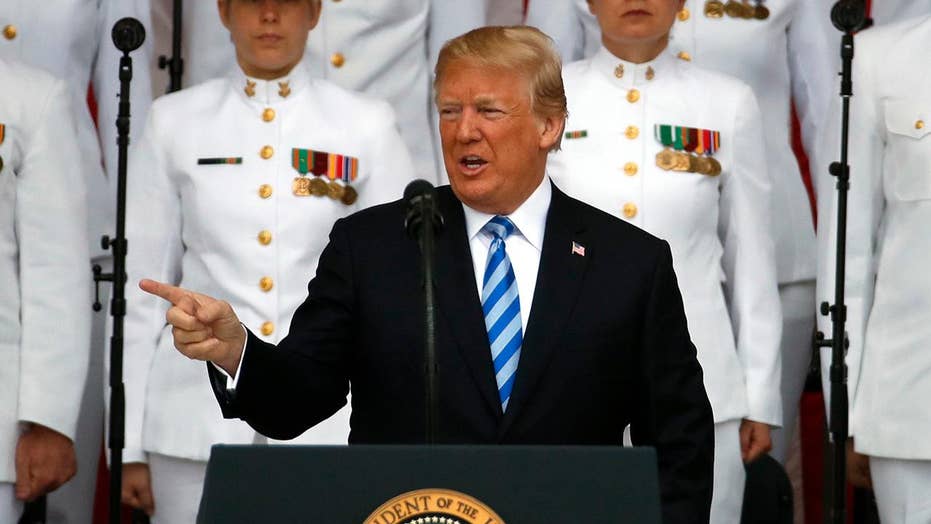 President Trump pledged to Gold Star families on Monday to "never forget our heroes,” saluting those who made the ultimate sacrifice on this Memorial Day.

The president marked his second Memorial Day as commander-in-chief with a ceremony at Arlington National Cemetery. The president laid a wreath at the Tomb of the Unknown Soldier, alongside Defense Secretary Jim Mattis and Chairman of the Joint Chiefs of Staff Gen. Joseph Dunford. He then delivered brief remarks.

"We gather to honor the lives of America's greatest heroes," Trump said. “We’re joined today by the families of American heroes who made the ultimate sacrifice. We cannot imagine the depth of emotion that this day brings each year, the grief renewed, the memories relived, those last beautiful moments together cherished and always remembered. You also feel that incredible pride- a pride shared by one really and truly grateful nation."

“We will never forget our heroes,” the president said, adding that “today, we pay tribute to their service” and “strive to be worthy of their sacrifice.”

"It's our heroes who make us who we are and who determine what we will be. Our fallen heroes have not only written our history, they've shaped our destiny," Trump said.

The president pointed to each "marker" on the gravestones at Arlington National Cemetery, saying they "teach us what it means to be loyal and faithful and proud and brave and righteous and true."

He added that "as long as we are blessed with patriots such as these, we shall forever remain one people, one family and one nation under God."

Ahead of the ceremony at Arlington National Cemetery, Trump suggested that “those who died for our great country would be very happy and proud at how well our country is doing today,” touting the economy and record-low unemployment numbers.