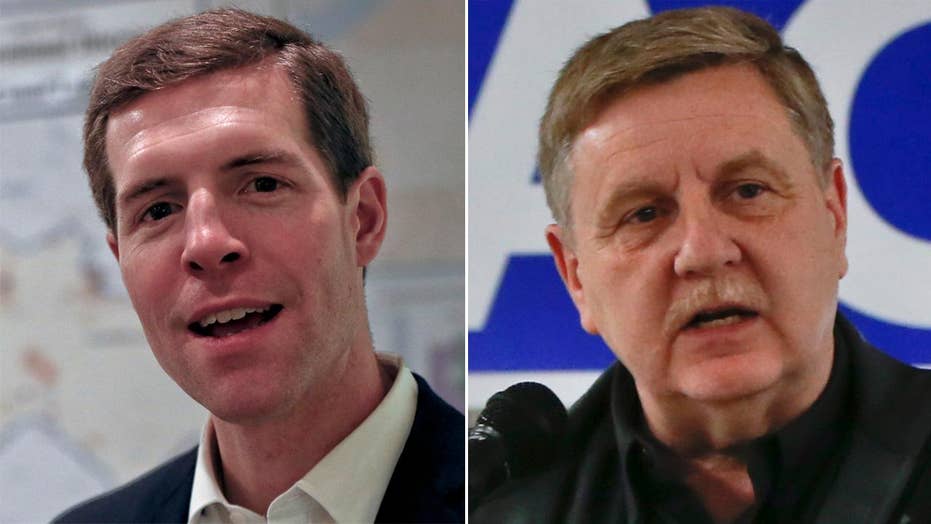 President Trump will stump Saturday night in western Pennsylvania for GOP congressional candidate Rick Saccone -- hoping to energize voters and bring some needed wattage to the campaign with Election Day on Tuesday.

In 2016, Trump easily won the congressional district, which has been a Republican stronghold for more than a decade. But Conor Lamb, the fresh-faced Democratic candidate in the special House election, has brought the race to a dead heat in the closing weeks.

The campaign for Lamb, a Marine and former federal prosecutor, has by most accounts had a superior ground game, out fundraising Saccone and mounting a better get-out-the-vote effort, which is critical in low-turnout special elections.

However, much of the district includes steel and coal country that remains loyal to Trump and stretches to the West Virginia border -- far beyond the more liberal Pittsburgh suburbs that Lamb, 33, is expected to win.

Saccone, a four-term state representative and a military veteran, has held campaign events in Waynesburg, about 26 miles north of West Virginia, at least twice in the past six days.

Trump won the state’s 18th Congressional District, where Saccone and Lamb are competing, by nearly 20 points, despite it having more registered Democrats than Republicans.

Trump won the district largely on a promise to restart shuttered steel plants and coal mines that appealed to its white, blue-collar workers. And his recent tax cuts and new tariffs on cheap, imported steel and aluminum should help solidify the district’s GOP-leaning voters.

Still, at least some registered Democrats in the district’s coal country who voted for Trump could already be looking for the next promise, as wages and job prospects remain relatively unchanged compared with elsewhere in the country, Douglas also said.

“People are look for a change and (Lamb) might just able to do that,” he said Tuesday on a Waynesburg sidewalk, just blocks from a shuttered coal mine.

Douglas also argued that other southwestern Pennsylvania towns have recently prospered while Waynesburg has not and that nearby Morgantown, W.Va., has roughly 450 practicing lawyers.

Lamb has indeed tried to win back district votes with an infrastructure plan that has become a centerpiece of his campaign.

Saccone spokesman Patrick McCann told Fox News that the campaign, in the final days, is largely focused on getting voters to the polls and that its closing argument is “record versus rhetoric” -- an attack on Lamb being a first-time candidate and his vow, if elected, not to be a rubber stamp for top House Democrat Nancy Pelosi of California.

“State Representative Saccone has consistently delivered for the people of southwestern Pennsylvania and would continue to do so in Congress,” McCann said, amid concerns about whether his candidate’s campaign has an adequate get-out-the-vote operation.

Saccone has, in fact, been forced to outsource that operation to paid contractors and the national GOP, which has scrambled to pick up the slack.

McCann also played down  the argument that the special House election is another test case -- like several last year -- for whether voters will still support the Trump agenda when roughly 470 House and Senate seats are up for re-election in November.

“There’s a lot of national attention on the race right now because it’s sort of the only game in town,” he also said. “But each contest, each district is its own animal.”

Lamb and Saccone, 60, are competing for the seat left open by GOP Rep. Tim Murphy, who held it for eight terms before resigning in October. Murphy stepped down following news reports he suggested that a woman with whom he was having an extramarital affair get an abortion.

Democrats will need to win a total of 24 seats this year to take control of the House.

Beyond  Saccone’s professional canvassers, teams from the Koch brothers-backed Americans For Prosperity arrived in the region this weekend to broaden the conservative outreach.

And the Republican National Committee has spent more than $1 million on its own operation that was expected to reach 250,000 targeted voters - either by phone or in person - by election day, said RNC spokesman Rick Gorka.

Overall, national groups allied with the GOP have spent nearly $8 million on advertising in the race, a figure that doesn't include logistical support on the ground and is more than seven times the amount invested by national Democratic allies unaffiliated with the Lamb campaign.

By Saturday afternoon, likely voters were standing in line in near-freezing temperatures for the Trump rally, at Atlantic Aviation, at the Pittsburgh airport.

“Heading to Moon Township, Pennsylvania, to be with a really good person, State Representative Rick Saccone, who is running for Congress. Big & happy crowd (why not, some of the best economic numbers ever). Rick will help me a lot. Also, tough on crime & border. Loves 2nd A & VETS,” Trump tweeted before arriving.

In recent days, former Vice President Joe Biden has stumped for Lamb. Trump is making is second visit this year to the district. And Vice President Pence has already campaigned along with Saccone.