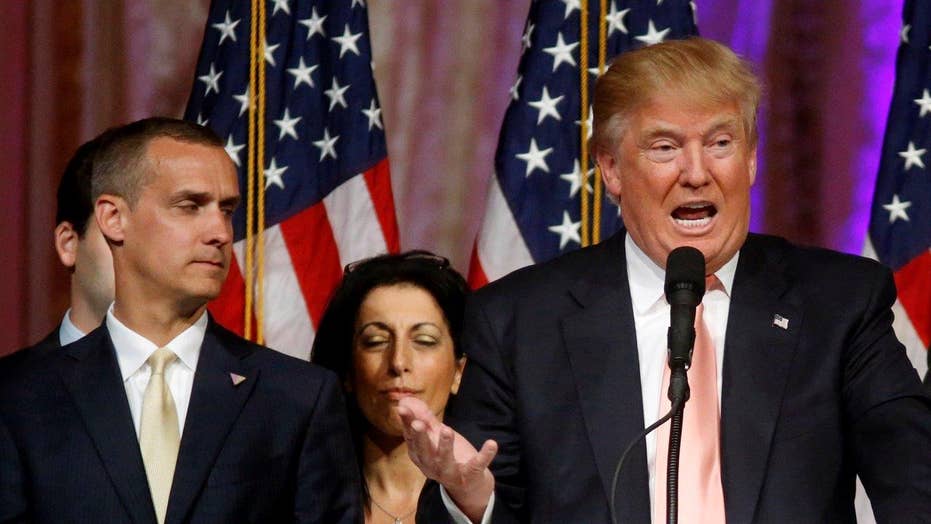 Trump on Lewandowski: I don't want to destroy his life

Donald Trump staunchly defended his campaign manager Wednesday after he was charged with misdemeanor battery over allegations he grabbed the arm of a reporter, as the Republican front-runner suggested the reporter could have been perceived as a threat.

“She's grabbing my arm. She's not supposed to. She broke through Secret Service, she is asking questions,” Trump told Fox News on Wednesday. “She's got a pen in her arm, which she's not supposed to have. It shows that she's a very aggressive person who is grabbing at me and touching me. Maybe I should file charges against her.”

Trump also defended campaign manager Corey Lewandowski at a town hall event in Wisconsin, rejecting calls to fire him because “I’m loyal” – while downplaying the allegations themselves.

If reporter Michelle Fields really had fallen, Trump said, “He would have been fired before she even got up.”

The counter-accusations made clear that Trump and his team would continue to fight the charges, which amounted to an unexpected curveball in a primary race that’s seen its share of surprises.

Fields, meanwhile, stood by her claims. And after Trump earlier suggested she changed her story, she pushed back.

The incident occurred after a March 8 press conference at the Trump National Golf Club in Jupiter, Fla., where Lewandowski was accused by Fields of grabbing her arm as she asked the Republican front-runner a question.

However, the Jupiter Police Department obtained video from the ballroom that it says parallels Fields' version of events, and subsequently charged Lewandowski.

Trump vowed to stand by Lewandowski, telling reporters Tuesday afternoon on his plane in Janesville, Wis. he does not discard people.

"Corey's a fine person. I looked at the tapes, the tapes were supplied by me," Trump said.

Fields resigned from her job at Breitbart.com shortly after the incident, claiming that the organization had not stood by her.