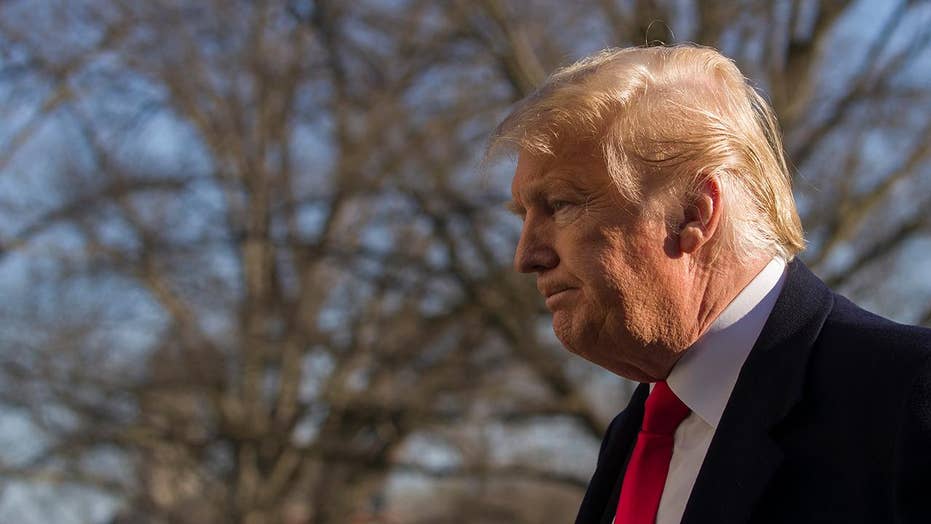 What can we expect from President Trump's national address?

For the first time in prime time since President Trump took office, all eyes are on the Oval Office.

Trump is preparing to deliver his first-ever evening address from the storied room in the White House's West Wing at 9 p.m. ET, amid a protracted partial government shutdown over funding for his proposed southern border wall,  Meanwhile, Democratic leaders have been prepping an immediate response, while top Republican senators made clear they don't know exactly what to expect.

With the nation's second-longest government shutdown in history entering its 17th day and rhetoric reaching an apparent inflection point, media prognosticators and political analysts on Tuesday raised a series of pivotal but unanswered questions. Will some networks choose not to air Trump's speech in full, or attempt to fact-check his statements live?

And will Trump, as he has suggested repeatedly in recented days, announce that he will use his emergency powers to build the wall even without congressional funding?

The White House requested eight minutes to make Trump's case on television. It invited representatives from cable news outlets to a White House lunch with Trump ahead of the address, a gesture that is typically reserved for the lead-up to State of the Union speeches.

Regardless of what transpires, negotiations are slated to continue throughout the week to resolve the shutdown, which has furloughed 380,000 federal workers and forced an additional 420,000 to work without pay. On Wednesday, Fox News learned, Trump will head to Capitol Hill for a policy lunch with Senate Republicans. Congressional leaders from both parties have been invited to the White House for a 3 p.m. ET sit-down afterward.

On Thursday, Trump plans a personal visit to the Mexican border, where his administration says an illegal immigration "crisis" is worsening by the day.

The number of illegal border crossings is down from 1.6 million in 2000 to less than 400,000 last year. But the number of families coming over the border has risen sharply, putting a strain on health care and immigration services that came into sharp focus with the deaths of two migrant children in December. Administration figures show that 161,000 family units crossed the border in fiscal 2018, a remarkable 50 percent increase from the year before. Homeland Security officials have also said 60,000 unaccompanied children crossed the border last year, a 25 percent increase.

South Carolina Republican Sen. Lindsey Graham told Fox News that he doesn't know what Trump will say during his prime-time address. But Graham added that Trump ideally will not use his presidential emergency powers to order the military to construct a border wall, saying that passing a spending bill in Congress is the "better way" to tackle the issue.

South Dakota GOP Sen. John Thune of South Dakota, the GOP whip, said he doesn't think the emergency declaration is the right move and that "I prefer that we get this resolved the old-fashioned way."

A migrant from Honduras holds his daughter while Border Patrol Officers look at them before they jump the border fence to get into the U.S. side to San Diego, Calif., from Tijuana, Mexico, Thursday, Jan. 3, 2019. Discouraged by the long wait to apply for asylum through official ports of entry, many migrants from recent caravans are choosing to cross the U.S. border wall and hand themselves in to border patrol agents. (AP Photo/Daniel Ochoa de Olza)

And Senate Majority Leader Mitch McConnell, R-.Ky., who met with Vice President Mike Pencc on Capitol Hill earlier in the day, did not answer when asked by Fox News on Tuesday whether he thought declaring a national emergency would be a good idea. But in a statement and remarks on the Senate floor, McConnell emphasized his support for the White House's aggressive tack.

CAN TRUMP USE EMERGENCY POWERS TO BUILD A BORDER WALL?

"In light of the urgent humanitarian and security crisis on our border, the president is requesting $5.7 billion for physical barriers and border security," McConnell said. "For some context, that is just about one tenth of one percent of federal spending. One tenth of one percent -- for physical barriers like the fences and barriers which already exist, which Democrats have previously voted for with enthusiasm."

GOP Texas Rep. Mac Thornberry, the ranking member of the House Armed Services Committee, reiterated to Fox News that he thinks a congressional compromise -- rather than emergency military spending -- is the best way to build the wall.

And House Freedom Caucus Chairman Rep. Mark Meadows, R-N.C., said the president may take whatever action he needs to fund the wall.

After a sit-down with Democrats over the weekend, the White House issued a series of budget demands, including a new request for $800,000 for humanitarian needs. But mostly Trump still wants his wall, which Democrats describe as immoral as well as no solution to illegal immigration.

In a pre-emptive move, the White House said Monday that tax refunds would be paid despite the shutdown. That shutdown exemption would break from past practice and could be challenged.

Dawn arrives at the Capitol in Washington, as the partial government shutdown enters day 18, Tuesday, Jan. 8, 2019, as President Donald Trump holds to his border wall funding demands. Trump will speak to the nation tonight about the border in a televised address from the Oval Office. (AP Photo/J. Scott Applewhite)

Emphasizing that he's not abandoning his security argument, Trump said in a fundraising email Tuesday: "I want to make one thing clear to Chuck Schumer and Nancy Pelosi: Your safety is not a political game or a negotiation tactic!"

Pelosi, for her part, has also sparred openly with the White House. She reportedly engaged in a tense confrontation with Nielsen on Wednesday in the Situation Room, with the California Democrat interrupting Nielsen’s presentation on border security and illegal immigration, telling her “I reject your facts.”

Leaning on Senate Republicans, some of whom are growing anxious about the impact of the shutdown, Pelosi said the House would begin passing individual bills this week to reopen shuttered federal agencies, starting with the Treasury Department to ensure Americans receive their tax refunds.

While Tuesday night promised to be a historic night and a kind of political prime-time prizefight, television viewers who were hoping to have a less political evening still have options.