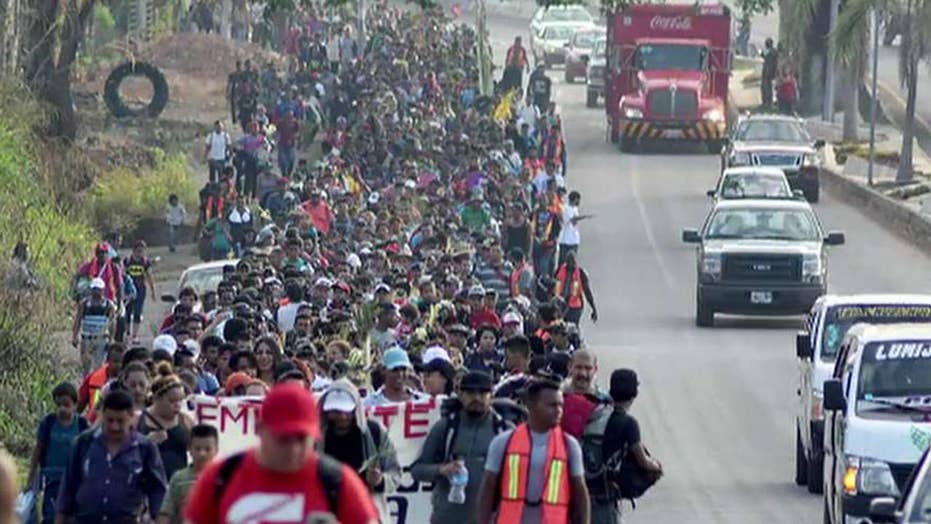 Mexico says it will disband the migrant caravan

President Trump on Thursday said that a caravan of more than 1,000 Central Americans traveling through Mexico had been “largely broken up” by Mexican authorities -- adding that it had avoided “a giant scene” at the U.S. border.

Trump tweeted a day after he signed a proclamation sending the National Guard to the border in response to what his administration called an “unacceptable” flow of drugs, criminal activity and illegal immigrants.

The move, about which specifics were unclear, appeared to be prompted in part by news reports of the caravan moving toward the U.S.-Mexico border. Trump reacted by threatening to end the North American Free Trade Agreement (NAFTA) and also end foreign aid to Honduras, where many of the migrants originated, if the caravan was not stopped.

On Thursday, Trump tweeted that the caravan was now “largely broken up” after Mexico had used their “strong immigration laws.”

Buzzfeed News, which first reported the caravan’s movements last week, reported on Tuesday that organizers said the caravan would travel to Mexico City, where only those with valid asylum claims in Mexico or the U.S. would continue moving north to the border.

In his tweet Thursday, Trump also said that border crossings are at a 46-year low, but said the rate was still “unacceptable.”

Announcing the National Guard move on Wednesday, Homeland Security Secretary Kirstjen Nielsen pointed to what she described as increasing fraud and exploited loopholes among arrivals on the southern border.

"Despite a number of steps this administration has taken...we continue to see unacceptable levels of illegal drugs, dangerous gang activity, transnational criminal organizations and illegal immigration flow across our border," she said.

Nielsen told reporters that the administration has drafted legislation and will ask Congress to provide legal authority and resources to address the problem.

"We will not allow illegal immigration levels to become the norm," she said. "More than 1,000 people a day, 300,000 a year violating our sovereignty as a nation will never be acceptable to this president."