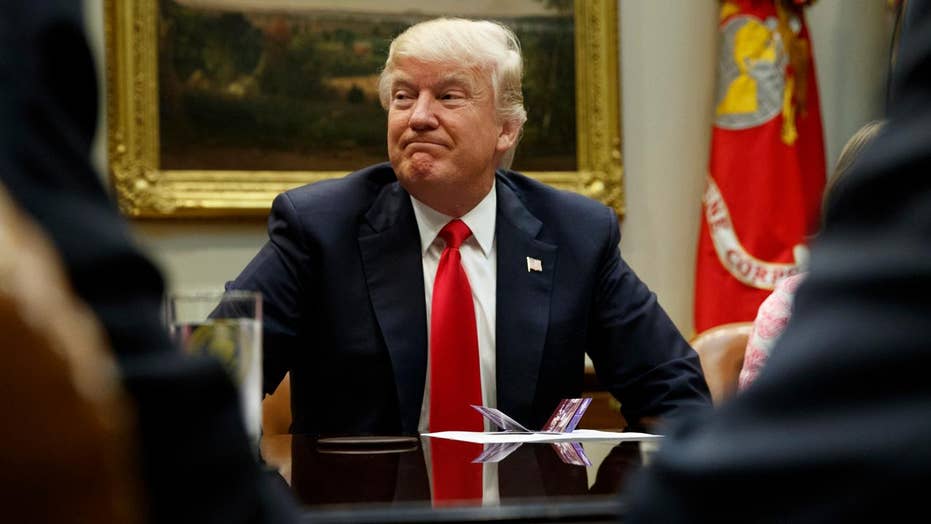 President Trump has riled congressional Democrats by threatening earlier this week to hold back payments to health insurers in an apparent bid to get them to negotiate over a new ObamaCare replacement package.

The president needled the minority party – which he’s suggested he could work with in the wake of House Republicans’ failure to pass an earlier repeal/replace bill – in a wide-ranging interview this week with The Wall Street Journal.

While his comments to the newspaper on foreign threats and White House palace intrigue drew more attention, Trump pointedly threatened not to pay what are known as "cost-sharing" subsidies to insurers meant to bring down the cost of deductibles and copayments for consumers. They're separate from the better-known premium subsidies that customers receive. But without them, experts say the government marketplaces that provide subsidized private insurance could face turmoil.

“I don’t want people to get hurt,” Trump said in the Journal interview. “What I think should happen—and will happen—is the Democrats will start calling me and negotiating.”

So far, Democrats are taking the opposite approach – lashing out at Trump and instead demanding that the payments be included in an upcoming spending bill.

“Refusing to make the Cost Sharing Reduction payments has no purpose but to hurt millions of people, and manufacture a crisis,” House Minority Leader Nancy Pelosi, D-Calif., said in a statement. “If President Trump followed through on his appalling threat, millions of Americans would see their out-of-pocket costs skyrocket and premiums would immediately be driven up by at least 15 percent.”

The new administration has continued to make cost-sharing payments to insurers as it weighs options.

Many of the changes announced Thursday follow recommendations from insurers, who wanted the government to address shortcomings with HealthCare.gov markets, including complaints that some people are gaming the system by signing up only when they get sick, and then dropping out after being treated.

The changes announced Thursday include:

-- Curbs on "special enrollment periods" that allow consumers to sign up outside the normal open enrollment window.

-- Allowing an insurer to collect past debt for unpaid premiums from the prior 12 months before applying a consumer's payments to a new policy.

-- Giving insurers more flexibility to design low-premium plans that can be tailored to young adults.

"While these steps will help stabilize the individual and small group markets, they are not a long-term cure for the problems that the Affordable Care Act has created in our health care system," Seema Verma, the Trump administration official responsible for the markets, said in a statement.

The changes come as insurers are figuring out their plans for 2018.

This year saw premium increases averaging 25 percent for a standard plan in states served by HealthCare.gov. Some insurers say they've lost hundreds of millions of dollars, and many have pulled back or are considering it.

Most communities will have competing insurers on the public marketplace next year, but a growing number will be down to one, and some areas may face having none.