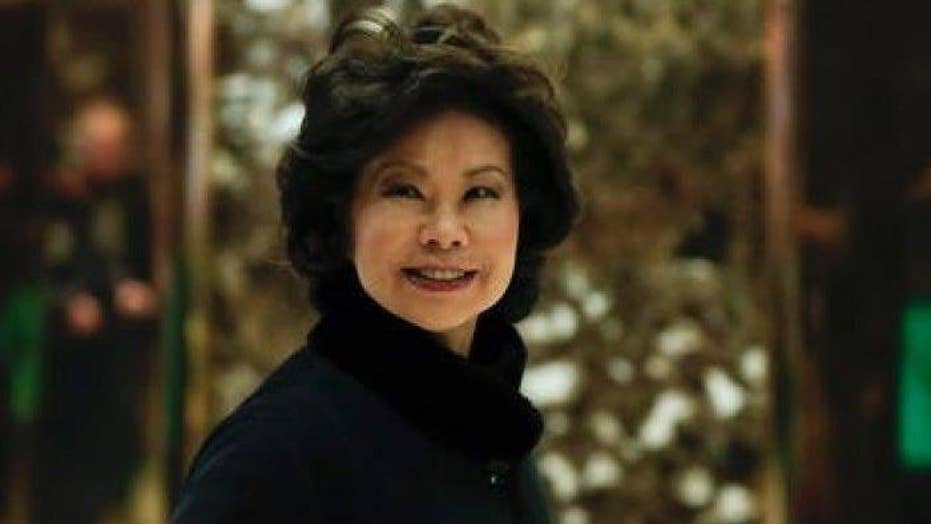 Chao, a Washington insider who met with Trump on Monday, was the first Asian-America woman named to a president's cabinet when George W. Bush made her secretary of labor in 2001.

In his announcement, Trump praised Chao for her "extensive record of strong leadership and her expertise ... She has an amazing life story and has helped countless Americans in her public service career."

Chao said that Trump had "outlined a clear vision to transform our country's infrastructure, accelerate economic growth and productivity, and create good paying jobs across the country." She added that she was "honored to be nominated."

Chao is also married to Senate Majority Leader Mitch McConnell, R-Ky., who said he was "so proud of Elaine as she continues her accomplished career in public service."

Sen. Chuck Schumer, D-N.Y. who will take over as the leader of the Senate Democrats after the retirement of Harry Reid, congratulated Chao ahead of the announcement and noted her "long history of service to our country."

"Senate Democrats have said that if President-elect Trump is serious about a major infrastructure bill, backed by real dollars and not just tax credits and without cutting other programs like health care and education, that we are ready to work with his administration," Schumer said in a statement. "I hope Secretary Chao shares that ambitious goal and is willing to work with Democrats to rebuild our crumbling infrastructure and create millions of good paying jobs along the way."

Chao, 63, was the longest tenured Labor Secretary since World War II. She is the only member of Bush’s original cabinet to have served both two terms of his presidency.

Prior to serving as Labor Secretary from 2001 to 2009, Chao was the Deputy Secretary of the Department of Transportation.

Chao immigrated to the United States from Taiwan in 1961 at age 8. Chao's father worked three jobs a day before eventually becoming a shipping magnate.

After leaving the Bush administration, Chao became a Fox News contributor and fellow at the Heritage Foundation.