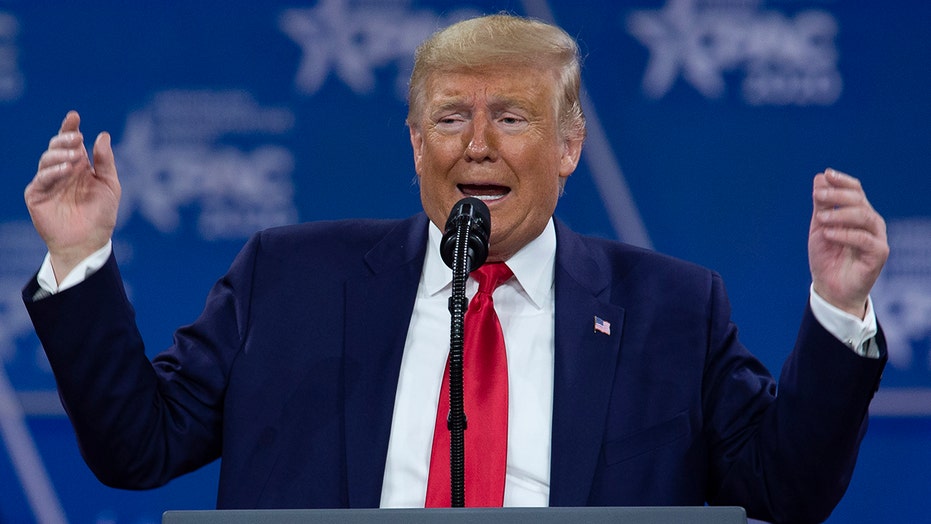 President Trump discusses Biden’s recent debate performance and how media coverage differs between the two of them.

President Trump used part of his CPAC speech on Saturday to criticize former Vice President Joe Biden's mental acuity, joking that he wouldn't be able to handle being president if he won in November.

"How could you be easier to beat than Joe? The guy can't put two sentences together," Trump told a crowd of conservatives.

He added that Biden's "not going to be running the government. He's just going to be sitting in a home someplace and people are going to be running it for him." Trump warned that while Biden was moderate compared to Sen. Bernie Sanders, I-Vt., the former vice president's team would be made up of "radical left socialists."

Trump's comments came after a week of Biden making several gaffes -- including when he claimed the country saw 150 million gun deaths since 2007.

Trump argued that Biden got easy media coverage compared to what he would have faced if he said something like that. He and First Lady Melania Trump were watching Tuesday's Democratic debate where Biden made that comment.

"Here's a guy said they killed 150 million people with guns and nobody even talks about it," he added. Biden's campaign reportedly clarified that he meant 150,000.

Trump's comments came as South Carolina held its Democratic primary. While campaigning in the state, Biden said was running for the U.S. Senate and vowed to appoint the 'first African American woman" to the Senate -- both of which were false claims.

Earlier in the campaign season, Biden appeared to fabricate a war story, inaccurately stated the decade when Robert F. Kenndy and Martin Luther King Jr. were assassinated, said he preferred "truth over facts," and misidentified New Hampshire as Vermont while campaigning in the early primary state.

During his CPAC speech, Trump also mocked Biden for mixing up locations. He suggested that the former vice president should write down the state he's in when speaking.

On Saturday, Biden's campaign responded by predicting Trump would be ranting on Twitter while Biden restores decency to the White House.

"A year from now, Joe Biden will have brought character, honor, and decency back to the White House," spokesman Andrew Bates said. "He'll be rebuilding the American middle class, fighting to give every American healthcare -- instead of trying to cost millions their coverage -- rallying the world against climate change, and reversing Donald Trump's repugnant and un-American immigration policies. Donald Trump, on the other hand, will be ranting on Twitter about how Deutsche Bank is refusing to give him a loan for 'Trump Tower Moscow: The Second Try.’”