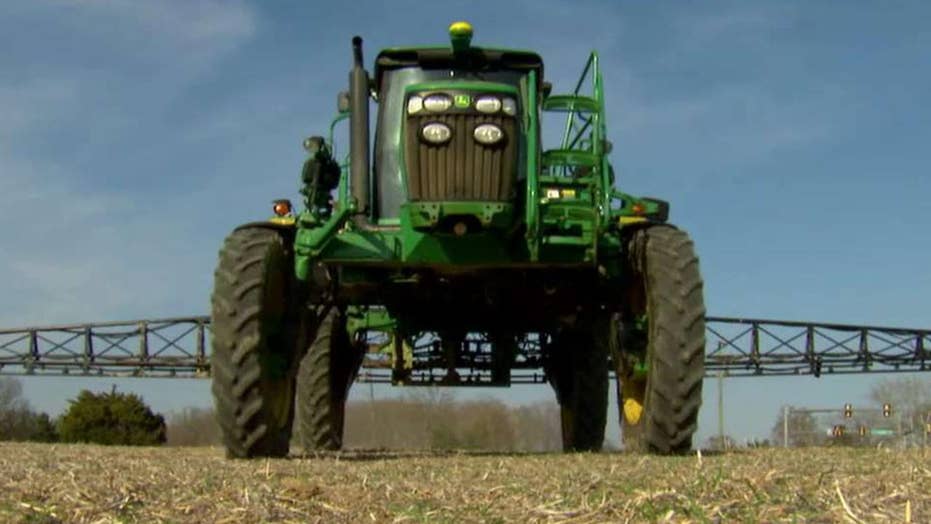 The House's controversial farm bill includes new restrictions and requirements concerning food stamps and that has Democrats lining up to take it down; chief congressional correspondent Mike Emanuel reports from Capitol Hill.

President Trump is expected to tell senior lawmakers that he'll veto the farm bill working its way through Congress if it doesn't include tighter work requirements for people on food stamps, a source familiar with the discussions told Fox News.

According to a committee fact sheet, seniors, disabled people, those caring for children under 6 and pregnant women would be exempt.

The Wall Street Journal reported that Senate Agriculture Committee Chairman Pat Roberts, R-Kan., said the changes in the Senate bill would not be as far-reaching as those in the House bill.

“If you don’t get 60 votes, this whole conversation is moot,” he said. The Senate version of the bill has not yet been released.

A Senate committee aide said ahead of the meeting that reports of a veto threat were just rumors. The aide told Fox News that the Senate version of the bill would not contain "revolutionary reforms" to programs, but that it was premature to say what exactly would be included.

House Agriculture Chairman Mike Conaway, R-Texas, told Fox News that he accepted that the bill in the House may change.

“I’m not arrogant or naive enough to believe that what passes the House is what will go to the president’s desk, but I am hopeful to have that conversation with the Senate in the context of the conference committee,” he said.

Trump was scheduled to meet with Conaway and Roberts Thursday afternoon at the White House.

Work requirements are "a priority and it is something he’ll be encouraging, but veto threats — way too early,” Short said Wednesday, according to The Journal.

Democrats had objected furiously to the SNAP reforms in the House bill, claiming it could throw as many as two million people off the program and create bulky bureaucracies to keep up with extensive rule keeping, while not providing enough money for job training.

"This legislation would create giant, untested bureaucracies at the state level. It cuts more than $9 billion in benefits and rolls those savings into state slush funds where they can use the money to operate other aspects of SNAP," said Rep. Collin Peterson, D-Minn., the top Democrat on the House committee. "Let me be clear: this bill, as currently written, kicks people off the SNAP program."

House Democratic Leader Nancy Pelosi of California said that Democrats would not support what she called a “radical, harmful” bill.

The House bill would also renew farm safety-net programs such as subsidies for crop insurance, farm credit and land conservation. Those subsidies for farm country traditionally form the backbone of support for the measure among Republicans, while urban Democrats support food aid for the poor.

Trump has long been an advocate of tightening work requirements, and called for it during his 2016 campaign. Last month he signed an executive order aiming to harden work requirements for welfare and public assistance programs.

The order, which aims to reduce poverty “ by promoting opportunity and economic mobility,” called for agencies to strengthen work requirements and look for new ones.

“Unfortunately, many of the programs designed to help families have instead delayed economic independence, perpetuated poverty, and weakened family bonds,” the order said.