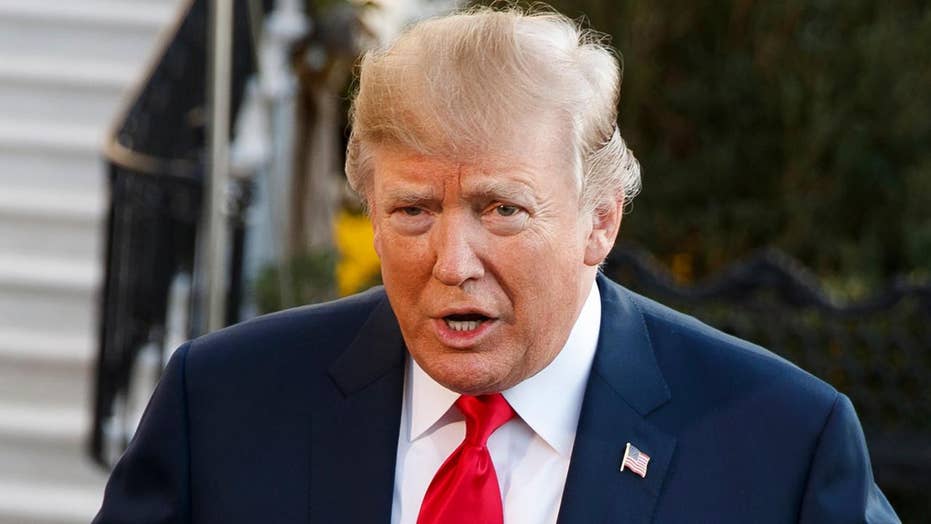 Trump: I'm disappointed in the DOJ for not looking into Dems

President takes questions from reporters before departing for Asia trip.

President Trump opened up on Democrats with both Twitter barrels from high in the sky Friday, exploiting fractures in the rival party after top operative Donna Brazile revealed insiders plotted to steal last year's presidential primary from Bernie Sanders.

"Bernie Sanders supporters have every right to be apoplectic of the complete theft of the Dem primary by Crooked Hillary!" Trump tweeted from Air Force One, as he headed off on a 13-day tour of Asian nations.

It was part of a mid-morning Twitter barrage in which Trump called for his own Justice Department to probe a range of scandals involving the Democratic Party and his vanquished 2016 presidential rival, Hillary Clinton.

“Everybody is asking why the Justice Department (and FBI) isn’t looking into all of the dishonesty going on with Crooked Hillary & the Dems,” Trump tweeted early Friday. “New Donna B book says she paid for and stole the Dem Primary. What about the deleted E-mails, Uranium, Podesta, the Server, plus, plus…”

In excerpts released Thursday from an upcoming book, Brazile, a longtime party stalwart and Clinton confidante, confirmed longstanding suspicions that the Democratic National Committee she once headed worked with Clinton to ensure she won the party's presidential primary over Sanders, the Vermont senator who built a huge following with his blend of Democrat politics and socialism.

"I always felt I would be running and winning against Bernie Sanders, not Crooked H, without cheating, I was right," Trump tweeted.

Brazile's explosive charge has sent shockwaves through the party.

“I had promised Bernie when I took the helm of the Democratic National Committee after the convention that I would get to the bottom of whether Hillary Clinton’s team had rigged the nomination process, as a cache of emails stolen by Russian hackers and posted online had suggested,” Brazile wrote in a book excerpt first published in Politico Magazine. “By Sept. 7, the day I called Bernie, I had found my proof and it broke my heart.”

The proof, according to Brazile, was a joint fundraising agreement document between the DNC, the Hillary Victory Fund and Hillary for America. It had been signed in August 2015, four months after Clinton announced her candidacy and a year before she officially secured the nomination over Sanders.

“The agreement –signed by Amy Dacey, the former CEO of the DNC and Robby Mook, with a copy to Marc Elias—specified that in exchange for raising money and investing in the DNC, Hillary would control the party’s finances, strategy, and all the money raised,” Brazile wrote. “Her campaign had the right of refusal of who would be the party communications director, and it would make final decision on all the other staff.”

DONNA BRAZILE: I FOUND 'PROOF' THE DNC RIGGED THE NOMINATION FOR HILLARY CLINTON

Even before Friday morning's tweetstorm, Trump reacted to the allegations against Clinton on Thursday night on “The Ingraham Angle.”

“It’s illegal, number one, and it’s really unfair to Bernie Sanders,” Trump said. “I’m not a Bernie Sanders fan, although I must say I got a lot of his votes when he was thrown out. Many of those people voted for me because of trade because I agreed with him on trade…But that was, I thought that was terrible.”

In an interview with Jake Tapper on CNN Thursday, Warren, D-Mass., was asked whether she believed the DNC was rigged, to which the senator simply responded, "Yes."

But on Friday, Trump took the opportunity to add the Brazile bombshell to a list of allegations and situations that he wants his Justice Department to investigate, including her “deleted E-mails” and “the Server,” pointing back to the months-long Clinton email investigation.

Trump also referred to “Uranium,” alluding to the controversial Obama-era Uranium One deal. The 2010 deal concerns the sale of Canadian mining company Uranium One to Russia’s Rosatom nuclear company. The U.S. was involved because the sale gave the Russians control of part of the uranium supply in the U.S. Clinton, at the time, was secretary of state.

Trump also referred to “Podesta,” though it is unclear if he was referring to Democratic lobbyist Tony Podesta, or his brother, Clinton’s longtime confidante and 2016 campaign manager John Podesta.

This week, Tony Podesta stepped down from his lobbying firm, which was co-founded with his brother John, in the wake of special counsel Robert Mueller’s probe expanding to question Podesta’s Foreign Agent Registration (FARA) filings, and whether he was in violation of that law.

A spokesperson for Podesta told Fox News that they were compliant with their FARA filings and were “fully” cooperating with Mueller’s team.

The president tweeted again, moments later, underscoring the need for a federal probe.

"....People are angry. At some point the Justice Department, and the FBI, must do what is right and proper. The American public deserves it!" Trump tweeted.