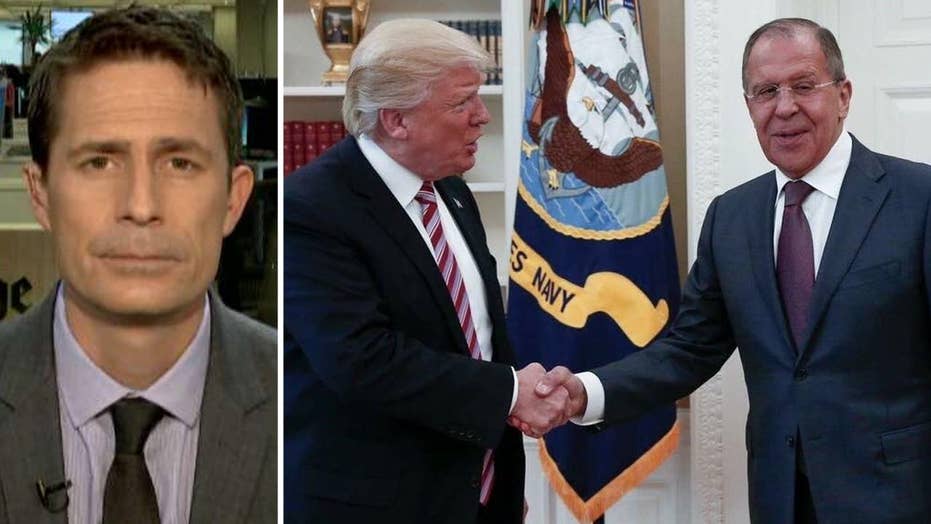 WaPo reporter defends his story on Trump's handling of intel

President Trump on Tuesday defended conversations he had with Russian officials following a report that he discussed classified information in those talks, saying he shared "facts" about terrorism and had "the absolute right to do" so.

National Security Adviser H.R. McMaster, Deputy National Security Adviser Dina Powell and Secretary of State Rex Tillerson all strongly pushed back Monday evening following The Washington Post report that Trump disclosed to Russian officials the foreign city where an ISIS plot was hatched – a development that could potentially lead the Russians to discover U.S. intelligence sources and methods. But Tuesday morning, Trump tweeted his first response to the firestorm.

“As President I wanted to share with Russia (at an openly scheduled W.H. meeting) which I have the absolute right to do, facts pertaining to terrorism and airline flight safety. Humanitarian reasons, plus I want Russia to greatly step up their fight against ISIS & terrorism,” Trump wrote in a pair of tweets.

The Washington Post report relied on anonymous current and former U.S. officials in its account of the small May 10 Oval Office meeting Trump had with Russian Foreign Minister Sergei Lavrov and ambassador Sergey Kislyak.

A Russian government spokesperson on Tuesday morning also denied any classified information was discussed in the meeting, describing the reports as "yet another fake."

The report alleging details of the meeting shows the Trump administration is still suffering from the leak problem that's plagued it since Day 1. Trump has pressed officials to go after those who are leaking, and there have been some government inquiries into the matter; however, to this point no one has publicly been named as the source of any leaks and there's no reports that anyone has been fired or prosecuted for the leaks.

The leak to The Washington Post that claimed Trump gave up secrets vital to the U.S. intelligence community also comes in the wake of Trump firing FBI Director James Comey on May 9.

"I have been asking Director Comey & others, from the beginning of my administration, to find the LEAKERS in the intelligence community.....," Trump wrote in a later tweet.

Trump, in his tweets, never said he shared sensitive or classified information and never said he disclosed sources, methods or even locations. The president's defense lines up with the Monday statements of McMaster and Powell, both of whom were at the meeting with Trump, Lavrov and Kislyak.

"The president and the foreign minister reviewed a range of common threats to our two countries including threats to civil aviation," McMaster said. "At no time, at no time were intelligence sources or methods discussed and the president did not disclose any military operations that were not already publicly known."

"This story is false," she said in a statement.

But Trump's supposed disclosure as reported by The Washington Post drew strong condemnation from Democrats and even cautious alarm from some top Republicans, marking an -- at-best -- embarrassing political moment as Trump prepares to visit the Middle East on his first presidential trip abroad.