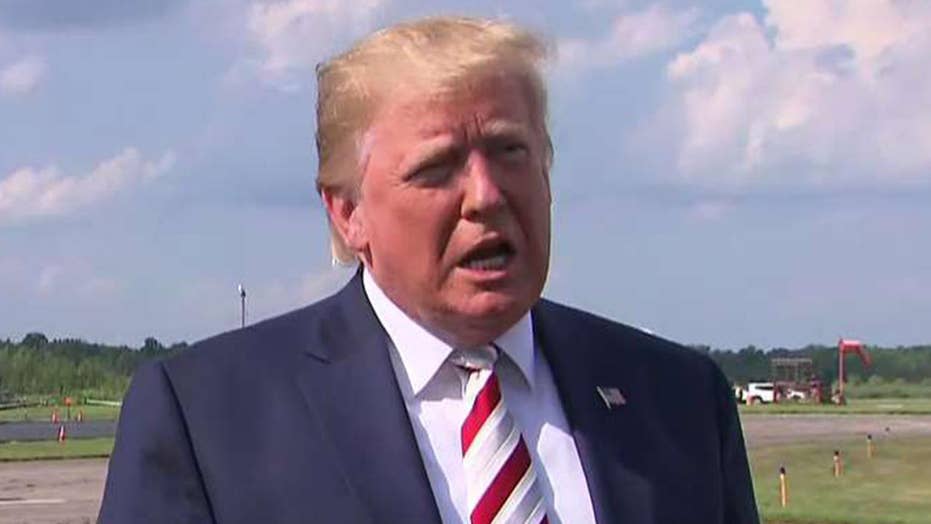 President Trump on Sunday forcefully denounced two mass shootings in Ohio and Texas, saying "hate has no place in our country."

Addressing reporters in Morristown, New Jersey, Trump promised "we're going to take care" of the problem. He said he's been speaking to the attorney general, FBI director and members of Congress and will be making an additional statement Monday morning.

He said the problem of shootings has been going on "for years and years" and "we have to get it stopped."

The shootings in El Paso, Texas, and Dayton, Ohio, over the weekend left at least 29 people dead.

President Donald Trump, with first lady Melania Trump, walks back to Airs Force One after speaking to the media before boarding Air Force One in Morristown, N.J., Sunday, Aug. 4, 2019. (AP Photo/Jacquelyn Martin)

The gunman in Ohio rampage, 24-year-old Connor Betts, opened fire outside a bar around 1 a.m. Sunday, killing his adult sister and eight others. Police say he was fatally shot by officers within 30 seconds, and was wearing a mask, bulletproof vest, earplugs and had at least 100 rounds.

Betts injured more than two dozen people, with one in critical condition, police said Sunday. Police had not determined a motive for the attack as of Sunday evening. Reports linked him to left-wing groups and showed that he supported Warren.

Meanwhile, authorities in Texas said the mass shooting is being investigated as a domestic terrorism case. Officials are also looking into whether hate crime charges against gunman Patrick Crusius, who has also been charged with capital murder, are appropriate after an alleged manifesto believed to be written by the 21-year-old could indicate “a nexus to a hate crime.”

The document posted online expressed concern that an influx of Hispanics into the United States will replace aging white voters, potentially turning Texas blue in elections and swinging the White House to the Democrats.

However, some observers cautioned that mass shooters are increasingly using disingenuous manifestos primarily as a means to cause division and sow political discord, rather than to advance a particular agenda. Crusius became the third mass shooter this year believed to have posted to the website 8Chan, which is a haven for both ironic trolls and racists, prior to going on a shooting rampage.

"The first mistake people are making is to assume the creep meant anything he said in his manifesto," wrote columnist Brian Cates. "Something new has been added into the mix in the last year and we have to recognize it: Mass shootings done for **fun** as the ultimate troll where these [shooters] write confusing manifestos and then sit back & watch the fun as both sides claim he belongs to the other."

Cates pointed out that the Christchurch, New Zealand mass shooter's manifesto contained a mixture of left-wing and right-wing rhetoric, and by its own explicit terms, was intended to cause international political division. 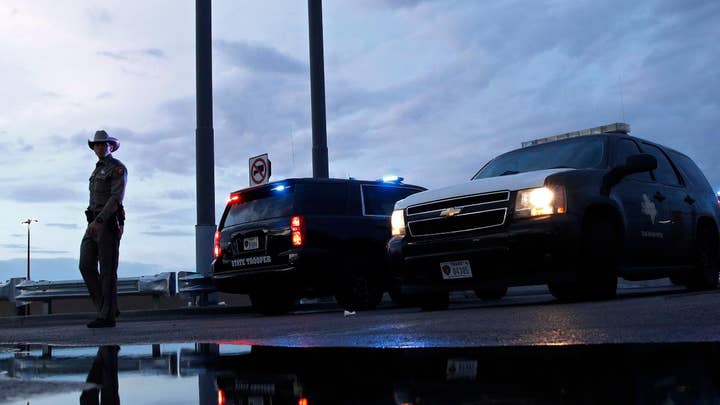 Politically, Democrats appeared split as to how much blame to assign to Trump. Booker, D-N.J., declared that Trump is "responsible" for the El Paso shooting, while another Democratic presidential contender, Julian Castro said "there's one person that's responsible directly" for the massacre -- "and that's the shooter."

Mourners gather at a vigil following a nearby mass shooting, Sunday, Aug. 4, 2019, in Dayton, Ohio. Multiple people in Ohio have been killed in the second mass shooting in the U.S. in less than 24 hours, and the suspected shooter is also deceased, police said. (AP Photo/John Minchillo)

And Castro, who previously served as San Antonio mayor and U.S. housing secretary, said Trump needs to do more to "unite Americans instead of fanning the flames of bigotry."

California Sen. Kamala Harris also found blame in Trump’s use of language, which she said has “incredible consequence.”

“We have a president of the United States who has chosen to use his words in a way that have been about selling hate and division among us,” she told reporters.

Beto O'Rourke, a former congressman from Texas, accused Trump of being a white nationalist and says he is encouraging "open racism."

WHITE HOUSE RESPONDS: NOT 'FAIR' TO BLAME TRUMP FOR SHOOTINGS

But Castro, speaking to anchor Jonathan Karl, reiterated that only the shooter bears "direct" responsibility. In a statement released later Sunday, Castro echoed that comment, saying, “These shooters are ultimately to blame for their actions. They are attempting to terrorize us but I believe that the vast majority of Americans reject this hatred."

He said the Senate should "have a special session to address gun violence in America and let us finally have the courage to take on the NRA."

He also called out the president, saying "I say to President Trump, please stop the racist anti-immigrant rhetoric. Stop the hatred in this country which is creating the kind of violence that we see."

In 2017, a far-left Sanders supporter fired upon a Republican congressional baseball practice, critically wounding House Majority Whip Steve Scalise, R-La., and injuring three others before U.S. Capitol Police took him down. Kentucky Sen. Rand Paul said the gunman was screaming, "This is for healthcare." Sanders did not take responsibility for that episode.

Sanders has joined several of his fellow Democratic presidential contenders in calling for universal background checks for firearm purchases and more restrictions on assault weapons.

"Assault weapons are designed for one reason," Sanders claimed. "They are military weapons. And I don't have to explain that to the people in Las Vegas who experienced the worst gun tragedy in the history of this country."

Eleven-year-old Leilani Hebben puts her head on her mother Anabel Hebben's shoulder as they visit the scene of a mass shooting at a shopping complex Sunday, Aug. 4, 2019, in El Paso, Texas. (AP Photo/John Locher)

Booker backed up Sanders' call in a tweet: "This is a national crisis. Mitch McConnell needs to bring the Senate back from recess right now and hold votes on legislation to protect Americans from gun violence. Enough. We need to end this carnage now."

“We should vote within 48 hours on the two background check bills that have already passed the House,” Warren said. “It’s not everything we need to do on gun safety, but we could take important steps, and we could demonstrate to the American people that the gun manufacturers are not the ones who are calling the shots in Washington.”

As the political debate raged, FBI agents on Sunday executed search warrants at three homes in the Dallas-Fort Worth area where Crusius had stayed.

An agency spokeswoman, Melinda Urbina, declined to give more details on the locations.

One of them was the home of his grandparents in Allen, Texas, where authorities shut down streets following the shooting.