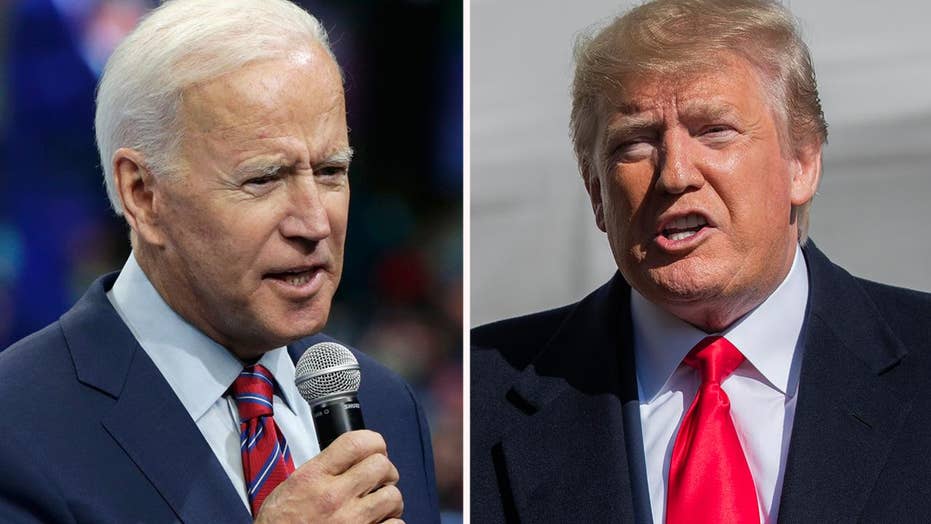 Can Biden beat President Trump if he's the Democrat nominee?

The Trump campaign hit back at the Biden campaign's recent argument that Democratic victories in Virginia and Kentucky last week foreshadow the party's success in the 2020 race, blasting that prediction as a "fantasy."

According to an unsigned memo circulated internally among Trump campaign staff and exclusively obtained by Fox News, the Trump campaign argued that last week’s election results — specifically in Kentucky — were actually a “clear rejection of the brand of radical extremism that Democrats are espousing and that Joe Biden has embraced again and again on the campaign trail.”

“If [former Vice President Joe] Biden thinks he will be able to hide from his record — and his recent conversions to current Democrat dogma — he’s in over his head as the pundits think he is,” the memo read. “Joe Biden’s campaign has proven that there is no centrist lane in the Democrat presidential race.”

The Trump campaign’s memo rejected the notion that the Biden campaign would be able to win Southern states in the general election in 2020 -- should Biden ultimately become the Democratic presidential nominee.

“Biden has shifted to the radical left on every issue concerning swing voters,” the Trump campaign memo read, referring back to a statement Biden made on the campaign trail earlier this year.

“I plan on, if I’m your nominee, winning Georgia, North Carolina, South Carolina, believe it or not,’” they quoted Biden as saying.

“We see no evidence to support this fantasy,” the campaign added.

The Biden campaign shot back in a statement to Fox News.

"When Donald Trump campaigned for Matt Bevin in a commonwealth he won by almost 30 points, he warned, 'They’re going to say, Trump suffered the greatest defeat in the history of the world. ...You can’t let that happen to me.' Well, Kentucky made that happen," Biden campaign rapid response director Andrew Bates said. "Bevin lost. Trump lost. The same outcome took place in Virginia and in 2018 when health care cost Republicans the House."

Bates continued: "This will continue as long as Donald Trump is still trying to take health coverage away from millions and end the ACA's life-saving protections for Americans with preexisting conditions. And Trump is so terrified of being called out for this moral failure that he tried to extort a foreign country into lying for him."

"No one buys his MAGA-dreamland excuses," he said.

The Trump campaign memo appears to be a direct rebuttal to a Biden campaign internal memo, which was first reported by NBC News last week and obtained by Fox News on Monday. The Biden campaign’s memo touted the off-cycle wins and strategies in swing states as “the right formula with which Democrats can retake the White House from Donald Trump.”

“And if this model succeeds in states as challenging for Democrats as Kentucky, it can absolutely gain us the necessary ground to re-take more competitive battleground states, and that is exactly what Joe Biden — more so than any other Democrat running –is poised to do,” it said. 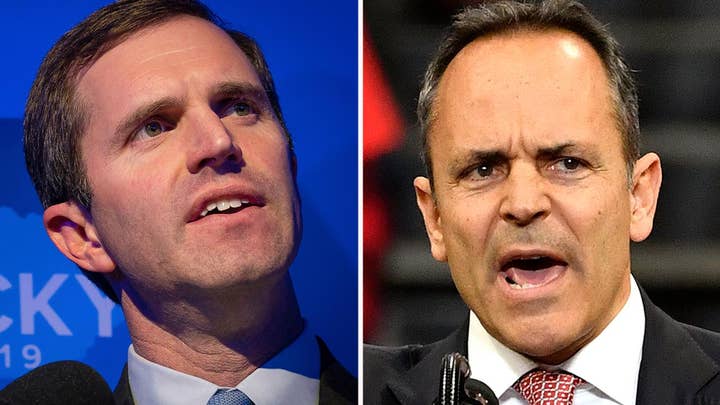 In Virginia, Democrats flipped both the state Senate and the House of Delegates, giving them control of both the governor’s office and the legislature for the first time in more than two decades.

Meanwhile, in Kentucky, Republican incumbent Gov. Matt Bevin trailed Democratic rival Andy Beshear, who served as the state’s attorney general. Bevin has not yet conceded in the race, but Democrats have declared victory. Bevin argued that there were “significant irregularities” in the race, and called for a recanvassing, after results showed him approximately 5,000 votes behind Beshear. That recanvass will take place Thursday.

Nevertheless, the Biden campaign touted Beshear’s lead, noting in the memo that Democrats used the issue of health care to help them win.

“In Kentucky, a state Trump won by nearly 30 points, Andy Beshear outmaneuvered incumbent Republican Governor Matt Bevin, by calling-out Bevin’s undermining of the Commonwealth's Medicaid expansion that has gained thousands healthcare coverage and holding him accountable for the divisions he stoked as chief executive there,” the Biden memo read.

The Trump campaign, though, has instead painted Beshear as a “Trump-friendly moderate,” saying he distanced himself from impeachment “and took great pains to reach out to Trump-supporting conservatives in coal country and other parts of rural Kentucky.”

“[Beshear’s] campaign went so far as to run an ad with Trump voters: ‘I’m still a Donald Trump guy,’ one voter tells the camera. ‘Trump, 100 percent,’ says another,” the memo read.

“In contrast, Joe Biden has loudly called for President Trump’s impeachment and, like the rest of the 2020 Democrats, made it a centerpiece of his campaign,” the Trump campaign added. “He has slandered Trump voters like those featured in Beshear's ad as racists, embraced the job-killing Green New Deal, pledged to ‘shut down’ coal plants and end all fossil fuel development, ridiculed middle-class tax cuts, endorsed taxpayer-funded abortion, and close down detention facilities for illegal immigrants.”

They added:  “This is the ‘template’ Joe Biden is planning to run on in 2020 – and it won’t sell in Kentucky or elsewhere.”

The Trump campaign’s memo also touted other Republican victories in Kentucky, such as Daniel Cameron as the first African-American to be elected to be Kentucky’s attorney general. Further, Cameron will be the first Republican attorney general in the state in more than 70 years.

“While the mainstream media will continue to extrapolate an incoming blue wave based solely on one outlier race in Kentucky, the fact remains: this was a historic night of victories for Republicans and a great indication of what’s to come in 2020,” she wrote in an op-ed for Fox News. “Enthusiasm for President Trump and his policies continues to grow, and in less than one year we will once again witness a historic victory as President Trump is reelected and Republicans win up and down the ballot.”

Meanwhile, the latest Fox News poll reveals that in a head-to-head match-up, Biden leads Trump by 12 points with 51 percent of the vote over Trump’s 39 percent. In October, Biden led that same poll by 10 percent.