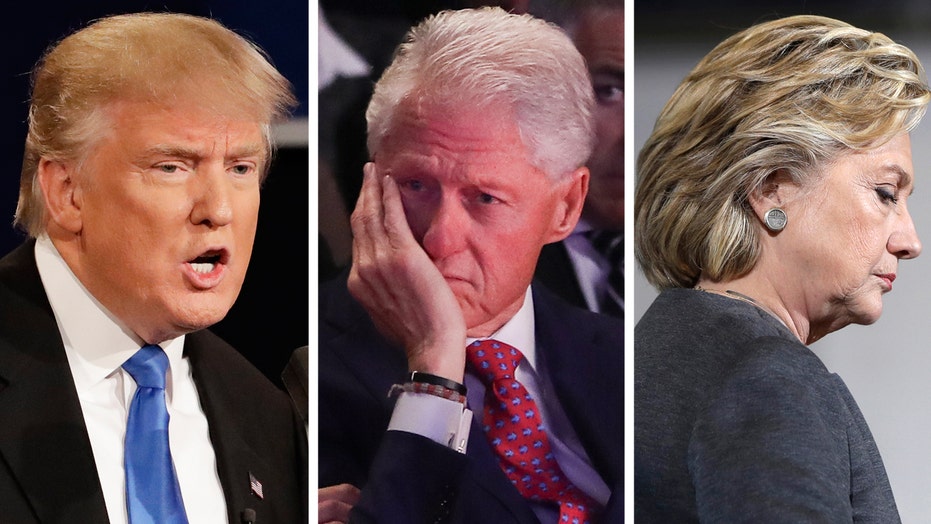 Donald Trump’s campaign is signaling that Bill Clinton’s history of affairs and alleged sexual misconduct – as well as Hillary Clinton’s treatment of the women involved – is now fair game, after his Democratic opponent took the first shot by calling out his own negative comments toward women at Monday’s debate.

The Republican nominee took a direct swipe at the former president during a New Hampshire rally on Thursday, in a sign of jabs to come.

"The American people have had it with years and decades of Clinton corruption and scandal," Trump said. "And impeachment for lying. … Remember that?"

Trump and his surrogates argue that Clinton opened the door when she raised accusations during Monday’s debate that Trump called former Miss Universe Alicia Machado names like “Miss Piggy” and taunted her.

In an early morning tweet-storm, Trump hammered Clinton and Machado for teaming up against him -- and referenced Machado’s checkered past.

“Part of it is … how Hillary Clinton has poorly treated women for many, many years,” retired Lt. Gen. Mike Flynn, a Trump supporter, told “Fox & Friends” on Friday.

“If you look at her being an enabler, really, in the ‘90s and really attacking these women, it goes against everything that she now tries to spout as a candidate for president,” David Bossie, Trump’s deputy campaign manager, said on the same program.

Such comments are part of a new game plan. According to a talking points memo reported by CNN and NBC News, the campaign is urging surrogates to discuss how Hillary Clinton “bullied” women tied to her husband’s controversies.

“Hillary Clinton bullied and smeared women like Paula Jones, Gennifer Flowers and Monica Lewinsky,” according to the reported talking points.

The memo suggests stressing that the former first lady “has been an active participant in trying to destroy the women” who have made allegations against Bill Clinton.

The Democratic nominee, asked Thursday by reporters about the apparent Trump push to invoke her husband’s controversies and impeachment, did not respond directly.

“He can say whatever he wants to say. … and I’m going to run my campaign talking about what I think the American people are interested in,” Clinton said.

Before Monday’s debate, Trump tweeted possible plans to invite Gennifer Flowers, Bill Clinton’s former mistress. The campaign did not follow through on the threat – though after Clinton was seen by many analysts as getting the better of Trump during that debate, the GOP nominee said he had been holding back and threatened to hit harder in the next round.

In the interim, the campaign’s talking points appear to have been read by several surrogates.

“There continues to be this conversation about what he has said but when you look at what she has done – Gennifer Flowers, Paula Jones, Monica Lewinsky … My goodness, Monica Lewinsky had to start an anti-bullying campaign because of what the Clintons did,” said Tennessee Rep. Marsha Blackburn, a Trump supporter, said during an interview on MSNBC on Wednesday.

Some Republicans are urging against Trump digging into the ‘90s past, including a Republican at the forefront of the impeachment push, former House Speaker Newt Gingrich.

"It's totally the wrong direction to go," Gingrich said, according to The Washington Post. "He should not let them bait him into a swamp where they can revel in the mud."

Republican consultant Sarah Lenti told FoxNews.com “Clinton was not right for bringing [Machado] into the debate and the campaign obviously sought her out. But what Trump would be better off doing is rolling out a new policy proposal every day that affects women in a positive way, by talking about national security in a way that goes beyond building a wall.”

Clinton’s campaign insists any reference to either Bill Clinton’s past or Hillary’s participation in his defense is simply a distraction tactic.

“After his disastrous debate performance and his sexist attack on a former Miss Universe over her weight, Donald Trump is now trying to deflect by going after Hillary Clinton about her marriage," spokesman Brian Fallon said Wednesday in a statement.

But, after a period over the summer where Bill Clinton’s past seemed to fade as a campaign issue, its return to the political fray may be inevitable.

Juanita Broaddrick, who accused Bill Clinton of rape decades ago (an allegation he denies), has become more active on Twitter, attacking both Clintons and singling out Chelsea Clinton for defending her father.

That was after Chelsea Clinton told Cosmopolitan magazine that any attack on her parents was “a distraction from his inability to talk about what’s actually at stake in this election.”

The discussion could cut both ways for Hillary Clinton herself. The Washington Post detailed how Clinton “helped forge aggressive defenses” as other women from her husband’s past emerged after Flowers.

Lenti notes the respective attacks by Clinton, Trump and their surrogates harden support among their base voters, but do not expand their appeal among critical independent or undecided voters.

Whether Trump directly goes after Hillary Clinton on this front in the next debate remains to be seen, but he may have to be careful. A NBCNews|SurveyMoney poll taken after the first presidential debate showed 22 percent of likely women voters said the debate made them think worse of Trump and nearly a third said the debate improved their opinion of Clinton.