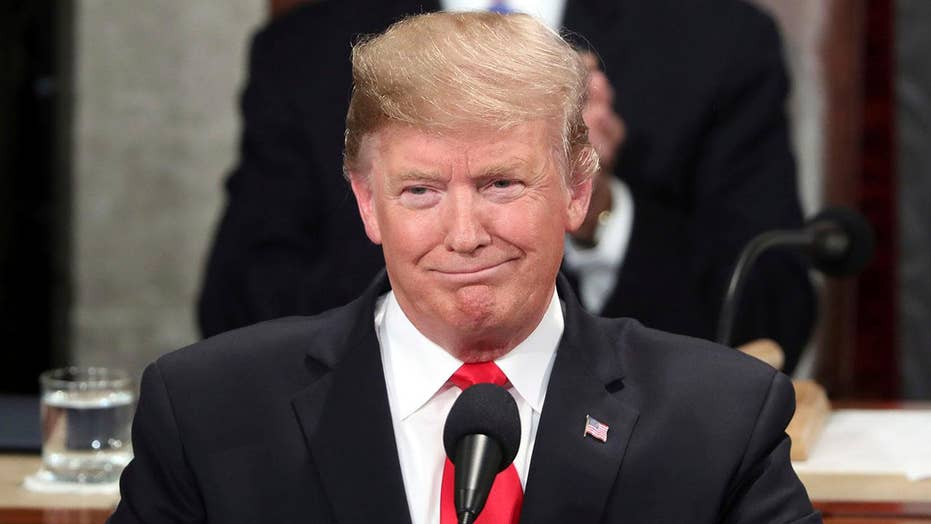 State of the Union Address, Part 3: Trump calls on Congress to confront national crisis on the border

President Trump delivered a strong defense of his administration's hard-line immigration policies and the Immigration and Customs Enforcement (ICE) agency during Tuesday night's State of the Union address, vowing that America "will never abolish our heroes from ICE."

The president touted the work of the agency during his speech, noting that its officers had made 266,000 arrests of "criminal aliens" over the past two years. He also singled out one ICE agent, Elvin Hernandez, for his work rescuing women and girls who have been victimized by international sex traffickers. Trump made a point of mentioning that Hernandez legally immigrated to the U.S. with his family from the Dominican Republican at the age of eight.

Hernandez, who works in the New York office of Homeland Security Investigations, was part of a group of agents who began targeting a violent pipeline for prostitution through Tenancingo, Mexico, in 2012. The final defendants were sentenced last month to decades in prison. In all, according to Hernandez, he and his colleagues brought down more than 80 defendants, rescued more than 150 victims -- including 45 minors -- and reunited 19 children with their mothers

Several prominent Democrats, including potential 2020 presidential candidates Elizabeth Warren and Kirsten Gillibrand, have called for ICE to be abolished, with Gillibrand describing it as a "deportation force" in a CNN interview last summer.

Earlier in his remarks, Trump urged Republicans and Democrats to "join forces" to confront the issue of immigration, which he described as an "urgent national crisis." He said that Congress "has 10 days left to pass a bill that will fund our government, protect our homeland and secure our very dangerous southern border," a nod to the looming Feb. 15 deadline to avoid another partial government shutdown that would come on the heels of the 35-day deadlock that ended last month.

The president has repeatedly insisted that Congress provide funding for his long-promised wall along the U.S.-Mexico border, which congressional Democrats have vowed to oppose. Trump has said that stopping human trafficking is a major reason for building the wall, saying on Tuesday night that traffickers " take advantage of the wide open areas between our
ports of entry to smuggle thousands of young girls and women into the United States and to sell them into prostitution and modern-day slavery."

However, data from the International Organization for Migration indicates that most trafficking victims come to the U.S. through ports of entry.

Trump did not mention Tuesday whether he would declare a national emergency that would attempt to circumvent lawmakers in a bid to get the wall built, though he has raised that possibility in the past. But he insisted that the barrier would be more than "just a simple concrete wall."

"This is a smart, strategic, seethrough steel barrier," he said. " ... It will be deployed in the areas identified by border agents as having the greatest need, and as these agents will tell you, where walls go up, illegal crossings go way down."

"Simply put, walls work and walls save lives," Trump emphasized. "So let's work together, compromise, and reach a deal that will truly make America safe."