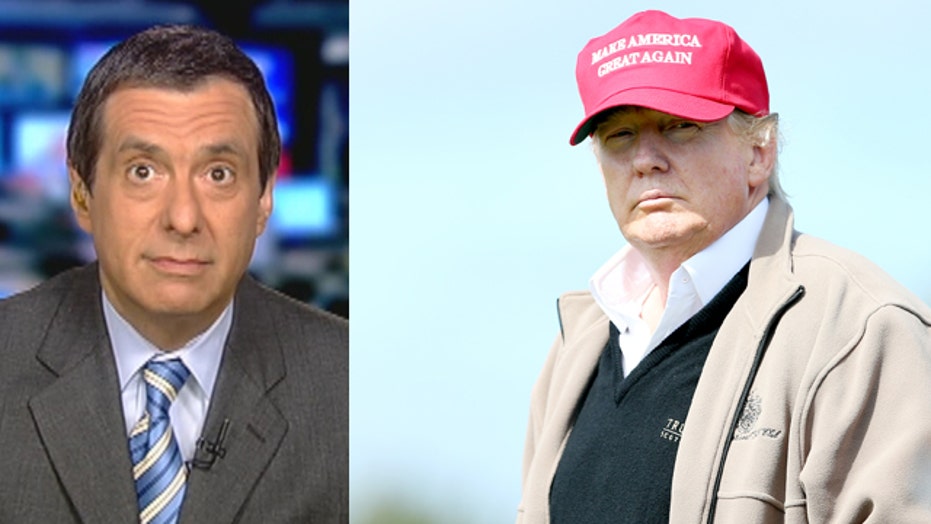 Kurtz: Dissing The Donald was a disaster

For a deep dive on how the mainstream media have utterly mishandled Donald Trump’s candidacy, there is no better place to start than Chris Cillizza.

The Washington Post’s “Fix” columnist is a seasoned political observer, MSNBC contributor and certifiably nice guy. And for a journalist who isn’t a bomb-thrower, he has also been unrelentingly hostile to Trump (now known as the Republican front-runner).

Back on May 13, Cillizza wrote: “Donald Trump will say almost anything to get a rise out of people. He is in the entertainment business, a professional provocateur of some renown. The business he is not in, of course, is politics.

That's a big problem for a party desperately working to prove it is ready, willing and able to take the reins of government back from Democrats…

“If Donald Trump takes the debate stage in Ohio come August, it's a big loss for a Republican Party desperately trying to prove itself anew to a skeptical public.”

So he basically dismissed Trump as a nuisance. But by June 17, Cillizza was taking pains to point out The Donald’s high negatives:

“You cannot and do not win anything when your numbers look like Trump's.  I can't say it any more clearly than that. There's nothing you can say or do -- not that Trump would ever even consider going on an image rehabilitation tour -- to change how people feel about you.  Republicans know Trump. And they really, really don't like him.

“Trump, of course, knows this. His goal is attention, not winning.”

In this formulation, Trump was all about building his brand and still not serious about seeking the White House. Not surprisingly, the billionaire fired back on Twitter:

“One of the dumber and least respected of the political pundits is Chris Cillizza of the Washington Post @TheFix. Moron hates my poll numbers.”

Undeterred, Cillizza made this comparison on June 23:

“Trump is sort of like the political version of the Kardashians -- people say they can't stand him but they also can't seem to take their eyes off him.”

And the columnist seemed genuinely ticked off at the people of New Hampshire after a poll there put Trump in second place. While professing his love for the state, Cillizza said: “But, seriously? Eleven percent of you want this guy?”

Plus, Cillizza did a drive-by on “Meet the Press,” accusing Trump of a “car-accident candidacy.”

Now, with Trump leading in a plethora of polls, Cillizza, to his credit, is admitting he was wrong, both in print and on the air. Trump “has quite clearly tapped into a populist message that plenty of people…are responding to,” he wrote yesterday. And: “Trump has been right a heck of a lot more than I have about his rise in this race.”

I don’t mean to pick on Chris, because he has plenty of company in the media establishment. They viewed Trump as something of an alien, a sideshow, a clown (which is how he was pictured on the cover of New York’s Daily News). And there was a unified chorus of “now he’s going to implode” after each perceived misstep (the Mexican immigrant remarks, the McCain war record comments), followed by shock and amazement when Trump continued his climb in the polls.

Perhaps because I’ve been interviewing him on and off since 1987, I knew Trump was a media master and not to be underestimated (though even I’ve been surprised by the speed of his ascent).

Now we have the media elite finally trying to grapple with Trump’s appeal. After a Bloomberg focus group (cited by Cillizza), author John Heielmann said it was clear that people don’t think Trump is a summer fling, that they like his success, that he’s a billionaire seen as “one of us.”

As Heilemann’s partner Mark Halperin said on “Morning Joe,” people think Trump is “classy. The establishment has to understand that. Right now they just think of him as a joke.”

Not everyone in the media is convinced. Yahoo’s Matt Bai, who’s still smarting from writing a 1999 piece on Trump’s flirtation with a Reform Party run, says The Donald is amusing us to death:

“Oh yes, I know, Trump is a legitimate obsession because he is the 'Republican front-runner.' Look at the polls. Only an arrogant elitist would avoid covering everything the front-runner says and does just because you think him insufficiently qualified…

“Trump draws crowds because he is a genuine celebrity and a world-class entertainer. Politics is tedium and sameness, like network dramas in the age before cable. Trump is reality TV, live and unscripted.

“And let’s drop all the pretense: That’s why we in the media hyperventilate over his every utterance, too. I’m not saying, as the Huffington Post does, that Trump’s candidacy shouldn’t be covered as an actual candidacy. Only that, if there were any real proportion here, Trump would merit about half the coverage he gets, and we wouldn’t constantly be baiting him to hurl some new, headline-making epithet.”‎

I get that news outlets are in a symbiotic relationship with Trump, who produces big ratings and traffic. But what many pundits haven’t figured out is that commanding media attention is a skill, one that many candidates just aren’t much good at.

That doesn’t mean Trump will win the nomination. It doesn’t mean he would be a good president. But it does mean he is running circles around a press corps that made the yuuuge mistake of treating him with disdain.