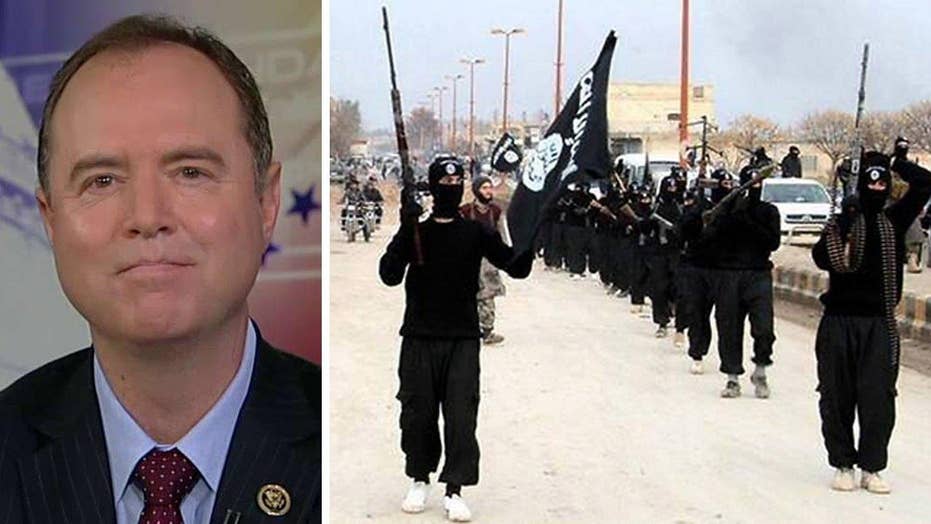 US doing enough to defeat ISIS?

A top Democrat on Sunday criticized the pace of the Obama administration’s war against the Islamic State, saying the U.S. needs to “change the dynamic on the ground.”

Rep. Adam Schiff, D-Calif., a top Democrat who has been critical of the administration’s policy, said he supports creating a no-fly or buffer zone -- “something that can end the refugee flows, something that can give space and time to train up forces to take on ISIS.”

President Obama has rejected implementing a no-fly zone near Syria, arguing that it would draw the U.S. into the regional conflict even more.

“I do think the administration ought to re-examine the idea of establishing safe zones,” Schiff reiterated on “Fox News Sunday.” “I think they ought to put that front and center in the U.N. negotiation, because I do think it has the potential of really changing the battlefield conditions and they have been stalemated for too long.”

Schiff also defended Democratic presidential front-runner Hillary Clinton’s comments Saturday night that the U.S. is “where we need to be” in the fight against ISIS.

“Well, this was in the context of do we go after [Syrian President Bashar] Assad or do we go after ISIS; can we do both? And her answer was basically we need to do both, and now for the first time we have a political process at the United Nations that ought to bring an end to both,” he said.

During the interview, Schiff said he supported a policy that would use social media as part of a visa screening process.

“If someone is brought in for an interview, for example, and is asked about their views on things, but as posted things that are completely contrary to the interview, frankly, I have much more faith in what they posted than what they say in the course of an interview,” he said.