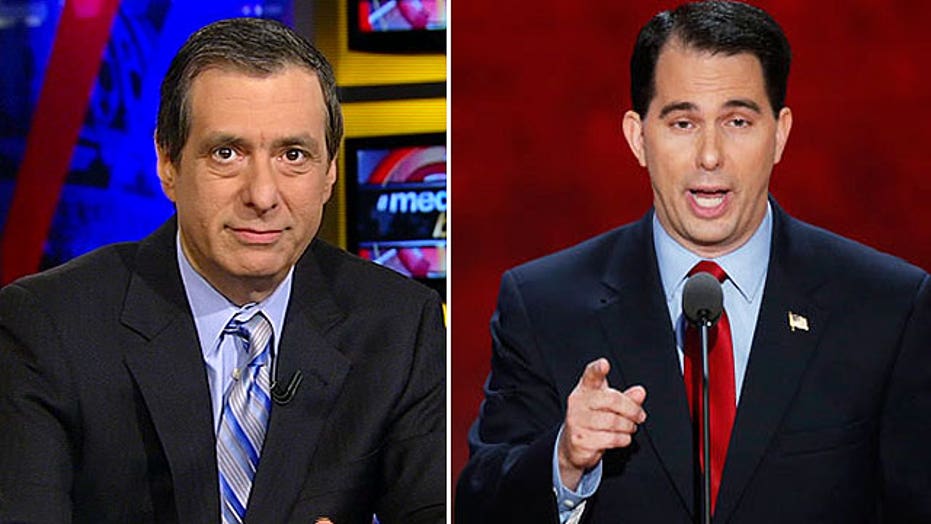 Kurtz: Are the media playing a 'gotcha game'?

'Media Buzz' host on Scott Walker vs. the press

Every candidate wants to stay on message.

Every reporter wants to get the candidate off message.

In the spotlight of a presidential campaign, these two impulses often collide.

And that has now morphed into a full-fledged debate over the fairness of poking and prodding candidates and potential candidates with such questions.

Scott Walker is taking the heat now for ducking a series of questions, while also accusing the media of playing a “gotcha game.”

Let’s say he’s right and that journalists are asking a bunch of unfair questions with the premeditated intent of embarrassing him. Complaining about that is like complaining about bad weather. All presidential candidates have to run the gauntlet of questions that range from prosecutorial to irrelevant to just plain snarky. Developing the instincts to finesse such moments is part of what makes a successful candidate: “The answer is yes, but this is a distraction from the real issues…”

By repeatedly insisting he has no need to answer queries he doesn’t like, the Wisconsin governor has turned what might have been a one-day flap into a weeklong story, the focus of a spate of cable news segments and web pieces.

Walker refused to comment on that, after refusing to answer a question he was asked in London about whether he believes in evolution. Then he would not engage when a couple of Washington Post reporters asked whether he thinks Obama is a Christian, although his PR person called afterward to say of course the governor believes that.

The governor is now raising money off the flap, saying in a letter that he wants to fight back against "the clueless and mindless journalistic herd."

Now to the fairness issue. It’s a staple of political coverage that when one of your supporters, or a prominent figure in your party, says something controversial, you get asked about it.

National Review’s John Fund, who was at the private Walker dinner where Rudy delivered the love of country line, says:

“It quickly morphed from Giuliani’s foolish words — it’s unwise to shoot from the lip on people’s love of country — to what every Republican of note thinks about Giuliani, starting with Governor Scott Walker, for whom the dinner was being held. Three days after the dinner Politico reported that Walker was still ‘hounded by questions about whether he agrees with Giuliani’ and even whether he thinks President Obama is a Christian — something Giuliani never brought up.

“NBC’s Chuck Todd, the host of Meet the Press, made clear that he ‘hated this story in so many ways.’ Nonetheless, he led his show with it. On one level, he’s right that such stark attacks are 'eventually network and cable catnip' for the media. Fair enough.

“But ABC’s George Stephanopoulos, Todd’s Sunday-show counterpart and a former Clinton aide, at least acknowledged the obvious: ‘There does seem to be a little bit of a double standard here. The Republicans tend to get asked these questions about their outliers more than Democrats are.’”

I think Stephanopoulos is right. The reaction tends to break down along partisan lines, with most conservatives siding with Walker’s tight-lipped stance and liberals ripping him. But if we in the media are going to keep bringing up such questions, we have to apply that approach equally to both sides.

“I’m tired of this whining and playing the victim card. That’s what liberals do. If Republicans are to win the White House, conservatives will have to take this advice: Learn to adapt and overcome — not complain about media bias.”

Walker’s hometown paper, the Milwaukee Journal Sentinel, says this is an outgrowth of “his disciplined and relentless approach to political messaging. The governor is known for taking a line and sticking to it. Once he decided he was going to defer on Giuliani's comments and not get drawn into taking a position on a controversial statement made by a fellow Republican, Walker stuck with that tack even after it drew him deeper into the story. He didn't deviate from his approach when the Post asked him about Obama's religion."

But there is also “the political brand of unwavering warrior he has cultivated throughout his governorship and in his unofficial presidential candidacy. That image has a lot of appeal among GOP voters and activists, but makes it hard to yield ground or change tack when your rhetoric gets you into hot water.”

“The governor is also making an aggressive effort to win the hearts of the party’s Christian conservatives. In doing so, he is stressing a much harder line on social issues than he did just a few months ago, when he faced a robust challenge from a well-funded Democratic woman in his run for re-election as governor.

“The shift in emphasis and tone is noticeable not only on abortion, but also on same-sex marriage, another issue of intense interest to social conservatives.

A few weeks before the November election, in an interview with The Milwaukee Journal Sentinel, the governor sidestepped questions about his earlier opposition to abortion, and declined four times to answer directly when asked if abortion should be prohibited after 20 weeks — a position he had previously embraced. He also declined to restate his earlier opposition to abortion in cases of rape and incest.” But now he’s boasting that he passed “pro-life legislation” and “defunded Planned Parenthood.”

This is also part of the ritual when a previously regional figure runs for national office, as the press questions whether that person is moving right (if a Republican) or left (if a Democrat) to pander to that party’s base. It’s why running for president is like playing nine-dimensional chess: the media scrutiny is relentless.