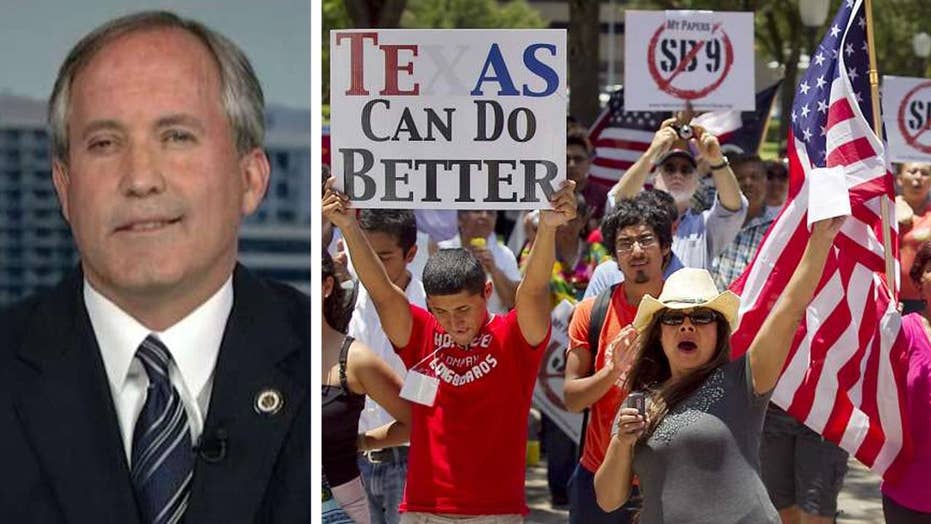 Texas Attorney General Ken Paxton already has filed suit against local jurisdictions that had been accused of not cooperating with federal immigration agents, in a preemptive bid to uphold a newly signed anti-sanctuary city law and head off numerous legal challenges.

Paxton filed the lawsuit in U.S. District Court for the Western District of Texas, as Gov. Greg Abbott on Sunday signed the crackdown which bars sanctuary policies and gives local law enforcement officers the right to ask the immigration status of anyone they stop. Under the law, local officers who won’t cooperate with federal immigration agents could face jail time and fines up to $25,000 per day.

"Unfortunately, some municipalities and law enforcement agencies are unwilling to cooperate with the federal government and claim that SB 4 is unconstitutional.”

The Paxton-filed suit names Travis County, the city of Austin and several local officials as defendants. A Paxton statement said the suit asks the court to uphold the constitutionality of the new law.

“SB 4 is constitutional, lawful and a vital step in securing our borders,” he said in a statement. “… Unfortunately, some municipalities and law enforcement agencies are unwilling to cooperate with the federal government and claim that SB 4 is unconstitutional.”

The suit is an effort to avoid a raft of individual lawsuits against the state in different courts, and seeks a ruling in a single court.

Among those named is Travis County Sheriff Sally Hernandez, who had stopped deputies from asking about immigration status and limited cooperation with federal immigration agents. However, she has said the county would follow the terms of the new law – even though she opposes it.

“While I hate seeing a state law like this come to pass, I have always followed the law and that will not change,” she said, according to KXAN.

In Austin, the police department issued a statement saying they are reviewing the language of the newly approved law, SB4.

Chief Brian Manley said in the statement, “The Austin Police Department has worked hard to build and maintain trust, communication and stronger relationships with our communities through outreach programs and community policing. This effort and engagement will continue. With the passage of this law, we want our minority community to maintain their trust in us, if you see or are a victim of a criminal act we want you to call us and report it."